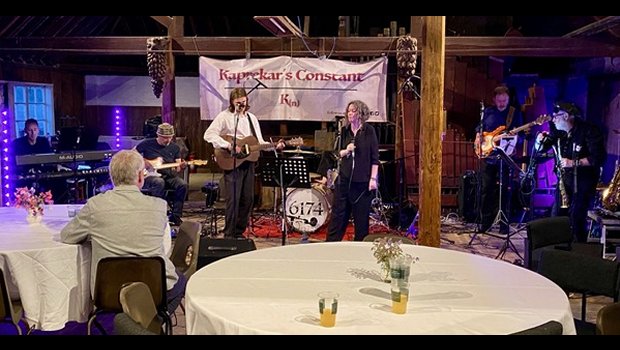 My phone pinged. Message alert. Nick Jefferson… “We are doing a private, warm-up gig on July 1st in an old oast house in Marden. We’d like to invite you. Free food and bar…”. Having picked up my jaw from the deck and recovered my now-dented phone from under the sofa, I checked the diary and cancelled everything for 1st July and duly confirmed in the affirmative with gushing thanks.

This a band on the serious up, particularly following their exceptional Depth of Field in 2019 and this year’s ever-so-concepty The Murder Wall. And warm-up gigs really get my attention, because one gets to see a band rather more in the raw and one seems somewhat closer to what they are trying to achieve. Kaprekar’s Constant hasn’t played live for nearly four years, and what that means is that the band has to choose a setlist from those two aforementioned albums, whilst not forgetting their 2017 debut, Fate Outsmarts Desire. How will they down-select from a repertoire of well over 3½ hours? 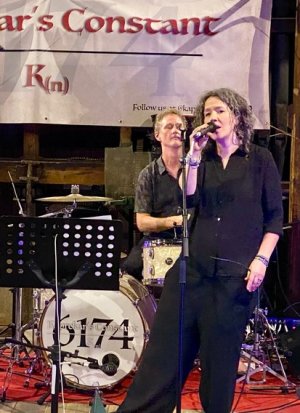 Well, they did it admirably. Two from the debut album, four from the follow-up, three from The Murder Wall, and even a little surprise from their Christmas single All You Wish Yourself. You really don’t get a set more diverse and representational than that…

Ghost Planes opened the set, followed by Holywell Street, both from Depth of Field. Ghost Planes was a superb choice as the band found their feet after their live hiatus. A 10-minute-plus energetic piece which immediately showcased the incredible drummer that is Mark Walker, adding real character to the overall feel of the song. As I have reported before, the interaction between Bill Jefferson and Dorie Jackson on vocals is tight and coordinated. And David Jackson’s saxes adds depth in spades.

The band moved on to The Silent Drum from The Murder Wall commencing with a beautiful lead guitar intro and a prominent alto sax from David, more so than is evident on the studio recording. Dorie’s vocals shine bright, accompanied by Mark’s percussive beat. And then Bill joins in to create a superb vocal duet. Call It A Memory, effectively the B-side to their Christmas single released in 2020, was an interesting choice. It does not feature on any album, but it is a must buy. It’s archetypal Kaprekar’s Constant, a delightfully engaging song with Dorie on primary vocal duty, whilst David juggles his plethora of instruments, one sax held under his arm, another producing sweet tones. It closes with a radiant vocal fade at the end.

The first set closer starts menacingly… White Star Sunrise from Depth of Field. It is one of my personal favourites from the band’s entire repertoire, telling the story of the White Star Line, of Oceanic, Atlantic, Republic, Olympic, Titanic and Britannic fame; just Google ‘White Star Line ships’ and you will see just how many ships this Company produced. The studio version comes in at nearly 24-minutes and I was left wondering how this epic would pan out. In the event, they played a near perfect abridged version, Bill’s vocals setting the scene, David on piccolo or tin whistle which is so appropriate for the theme of the song. The main theme is peppered with lovely guitar solos and this live version closes with a signature sax solo from David. 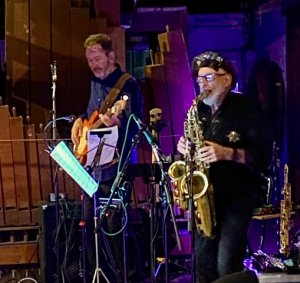 After a short interval, the band returned with The Nightwatchman, also from Depth of Field. It’s a delicate number, particularly from Mike Westergaard’s piano, and each member of the band gets their chance to shine. They moved seamlessly into The Stormkeeper’s Daughter from The Murder Wall. Again, Dorie takes centre stage with Bill on acoustic guitar and Al Nicholson taking the emphatic lead guitar. The central section appeared to be a bit laboured, which will doubtlessly be ironed out in future rehearsals, but the band recovered and Dorie’s vocals were perfect. It was a jolly number but somehow lost the punch of the studio version. It’s a diamond worth a little more polishing and so I hope they keep this in the set.

The penultimate track was Hallsands, a great story from the band’s debut album Fate Outsmarts Desire. It has a first-rate opening from lead guitar with some penny whistle, Bill really shining on lead vocals with Dorie providing reassuring support. It’s as good as the studio version. The rhythm section adds a prime, confident powerful baseline and drum accompaniment keeping perfect time. It’s a perfect showcase of Bill’s vocal talents and demonstrates his skills and authority as a front man. The song has a theme change, almost country and western, with David on flute, before returning to Bill continuing the story. There’s many complementary sections to this track, all played confidently with even a 9/8 section showcasing Mark’s skills. What more can I say; it’s the best track of the evening and I’m so pleased to have been reminded of it, as it really is one of the best compositions they have done. There was even a bit of cowbell at the end! 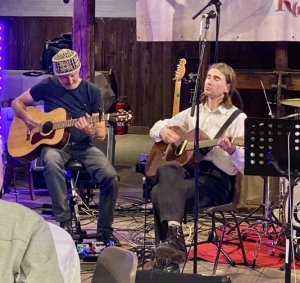 Following the introduction of the band members, including David’s huge endorsement of the skill in musical writing by the band, they close with the uplifting Victorious, the first single from The Murder Wall. It’s sure to be a crowd favourite, but this was another where this live performance did not have the same impact as the studio accomplishments. How does David manage to play two saxes at the same time? Experience, I guess… it’s a sight to behold.

The band is called back for an encore: Pearl of the Lake from their debut album. Dorie takes the lead vocal whilst Bill settles into acoustic guitar with Al, Mark providing a jazz-centric percussion. It is the least typical of Kaprekar’s Constant’s tracks, but it is a fitting end to a great warm-up show.

This was an essential gig for the band to cut their teeth, ready for the upcoming gigs. The acoustics were not perfect in the venue’s barn-like space, but the atmosphere more than made up for it in Peter Hall’s triple oast; and huge thanks to him for laying the gig on. The band is certainly gig ready and, with a little more refinement and confidence-building, I think they will get a rapturous welcome from future crowd. One of the difficulties is that their studio compositions are filled with symphonic complexity that are always going to be a challenge to reproduce in the live arena without a score of guest musicians or some backing tapes. The band have chosen to do neither and so the result when playing live lacked the complexity that the listener has become accustomed to. But it was still a joy to experience; no fancy light show and absolutely no need for one, just pure musical entertainment of a very high order, and the crowd will absolutely love their performance. 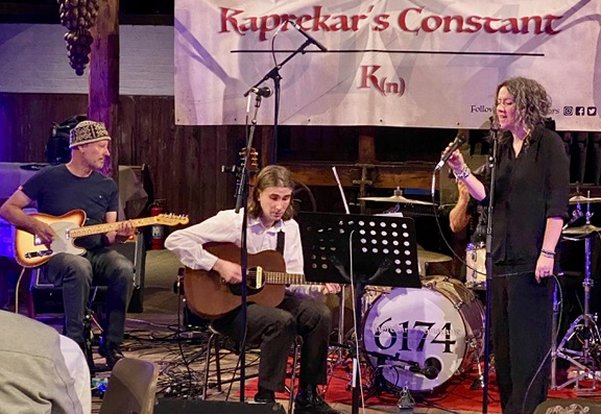 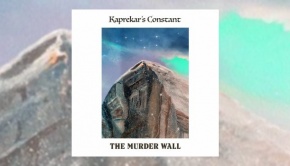 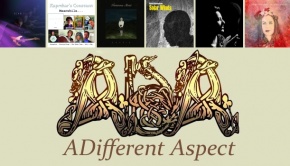