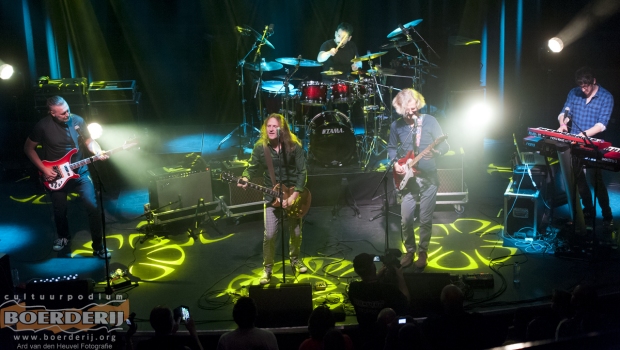 They hadn’t been around for many years and then all of a sudden they appear two (or possibly even three) times within twelve months. I am talking, of course, about the Swedish stars within the genre: The Flower Kings. Or actually ‘Roine Stolt’s The Flower Kings’, because it’s all about the tall, slender Swede with his brilliant guitar playing and constant stream of compositions, which he, it must be said, lavishly distributes among albums from Transatlantic, The Sea Within, Kaipa da Capo, Anderson/Stolt and his true love, The Flower Kings (TFK). With the latter, he released a new album, Manifesto of an Alchemist, at the end of last year, after five years of radio silence. After a truly excellent performance, short but powerful, in December last year, together with Spock’s Beard, the Swedes went on a small world tour that would take them to South America and Europe, among others. And now to the Boerderij in Zoetermeer, the Netherlands, of course. The place where they regularly performed in the past and recorded their live DVD Tour Kaputt in 2007. Once again this time, the experienced team of John Vis was busy recording a video of the performance, possibly for a new live DVD/BluRay, to be released at a later stage. The American band Jolly acts as support act. Their stoner rock is fairly well appreciated by the audience. But it is the Flower Kings whom they have come to see.

Some patience is required as it takes several minutes before the band appear on stage, after the hall lights have been switched off, and to allow for the long intro music. Last Minute On Earth is a great opener, especially, the harmony vocals and the great singing voice of vocalist Hasse Fröberg. The song swings but is razor sharp at the same time, blending seamlessly into What If God Is Alone, again with strong harmony vocals by Stolt and Fröberg, and superb lead vocals by the latter. There Is More To This World from 1996’s Retropolis continues the tone of the earlier songs, now with fourfold harmonies and as tight as humanly possible. 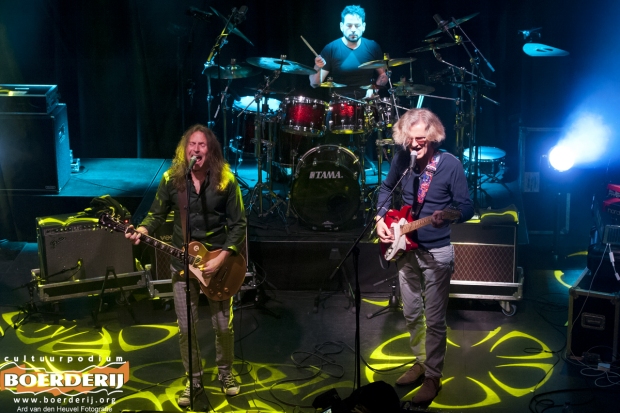 The Truth Will Set You Free is an epic song taken from 2002’s Unfold The Future, and it is played in its entirety. Fast twists and turns along with many tempo and mood changes characterise this super symphonic song, which more than stands up to the comparison with Yes, musically speaking. In this song, which lasts almost half an hour, Jonas Reingold gets the opportunity to demonstrate his considerable capabilities on the bass guitar. Unfortunately, boss Stolt is also involved and his bluesy guitar playing is not entirely in line with what Reingold had in mind: halfway through his solo, a quasi-worried bass player ‘argues’ with his helmsman, much to the delight of the fans.

There is lots of showmanship from singer and left-handed guitarist Fröberg, his rock poses are fairly well-known by now, despite the fact that his playing is limited to some chords and the odd duet with master guitarist Stolt. Vocally he takes the high notes which keeps him to his toes, literally, as I regularly spot him balancing on his toes while reaching extremely high notes. Once again lots of solid bass playing by veteran Jonas Reingold, both his walking lines, individual notes playing, often in collaboration with Stolt, as well as his soloing, he is truly an excellent bass player. Something that has not gone unnoticed by Steve Hackett, as evidenced by the fact that the tall Swede is now part of the latter’s star touring ensemble. 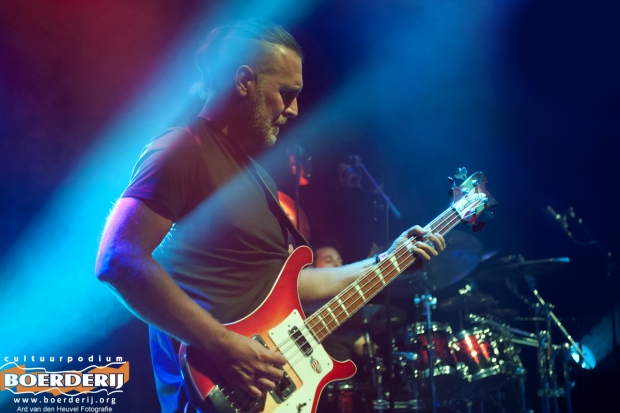 The drums are unobtrusively good, Italian Mirko de Maio has big shoes to fill with such illustrious predecessors as Jaime Salazar and King Crimson drummer Pat Mastelotto. He does a fine job without really going overboard, and the same applies to keyboard player Zack Kamins, somewhat student-like features, but making it clear that Stolt has made a good choice with this American. Stolt himself looks relaxed and relatively calm, soloing with utmost concentration, regularly looking for the right adjustment of his instruments, the perfectionist he is. This can sometimes lead to an irritated musician, and, as a result, a crabby attitude, but that is not the case this evening. The orchestra conductor is visibly at ease, taking care of all the introductions and taking ample time for a dialogue with the audience. The now 62-year-old composer/guitarist/singer/producer/bandleader doesn’t look his age at all, he still looks great and has, most fortunately, exchanged his ‘Zlatan’ ponytail for his well-known half-long blonde coupe. 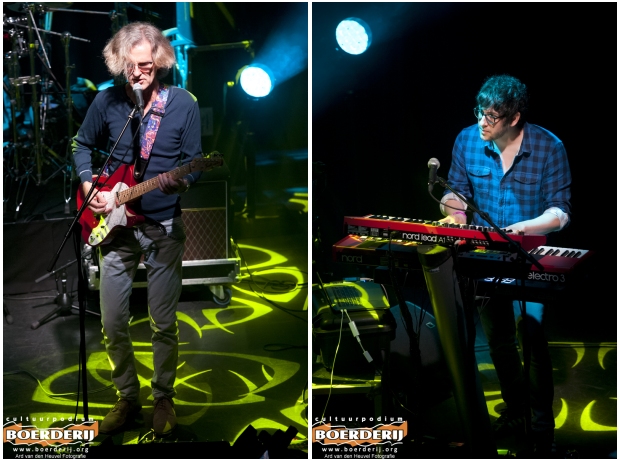 The colour red seems to be the theme of the evening as the drums, bass, guitar and keyboards are all in fiery red, only Hasse Fröberg’s gold-coloured Gibson looks slightly out of place. This is further underlined by the excellent work of the person(s) responsible for the lights, illuminating the stage and band in bright red sunny rays. Said perfection also applies to the sound, which is always well mixed at the Boerderij, and that is no easy task in this particular case, as the quintet’s music is chock full of strong arrangements and solos, nevertheless the individual instruments are perfectly audible in the mix.

We’re in for a surprise: The Flower King from Roine Stolt’s eponymous 1995 solo album is a great (pop) song and is not often played live. A super guitar solo by the master, supported only by drums, flows seamlessly into My Cosmic Lover, topped by delicious walking bass lines by Jonas Reingold. In The Eyes Of The World, on the other hand, with its strange intro, rocking heavily, shows a leading role for De Maio’s drums. Stardust We Are is also played in its entirety, quite unique. The magical and extremely recognisable tones of the intro are followed by a succession of beautiful melodies and intense playing by the five musicians. Natural highlight is the piece of the same name sung by Fröberg, an absolute top class sympho song. Once again, I hear influences from Yes, although this time it is not Close to the Edge but Close to Divine. 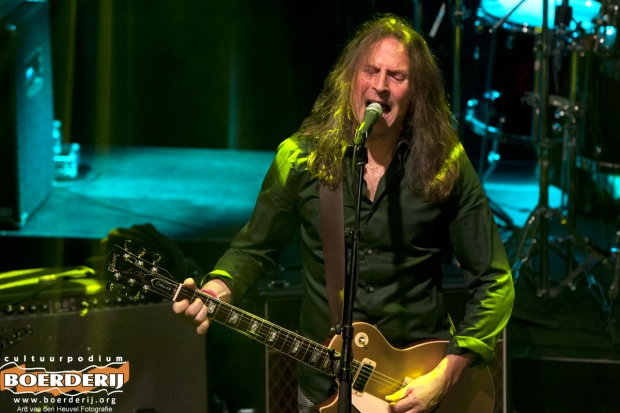 After more than one hour and 50 minutes of focussed playing, the group is in need of a short break. They confess to being a little dizzy and tired due to chronic lack of sleep. And also, without the traditional herring during the midsummer night party, as a true Swede, you feel somewhat lost. Despite all this, the band manages to squeeze out an emotional version of the last part of Life In Motion from 2007’s Sum of No Evil, while the expressive voice of Fröberg does the rest. Final song I Am The Sun (Part One) is the last encore this evening, brilliant drumming by De Maio in a heavy version of this great song.

Two hours and ten minutes of intense and heavy music, both rocking and swinging as well as ethereal, great stuff. Frontman Roine Stolt hinted that new material may be released later this year, the same goes for a likely return to the European stages at year-end, so good news. But first off to Valkenburg in the south of Holland for the Midsummer Prog Festival with, among others, co-stars IQ and Focus, one day later. Possibly, that is also the reason that only about two hundred diehards had found their way to the Zoetermeer prog temple, on this longest day of the year. On the one hand, it is a shame, but at the same time it is a great opportunity to admire our heroes up close. The loyal audience showed its gratitude through applause, sometimes lasting for minutes, and frenzied responses, especially to the longer pieces. 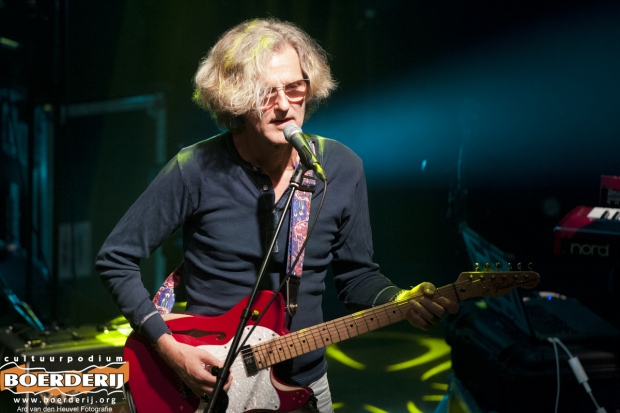 An excellent show from the Swedes following the already mentioned duo performance with Spock’s Beard at the end of 2018 at the same venue. Not a single song from the new studio album, alas, but all the better to hear them perform all those epic ultra-long songs from the past, the way they were always intended: with power and passion, just as we are used to from The Flower Kings.

SET LIST
Last Minute on Earth
What If God Is Alone
There Is More to This World
The Truth Will Set You Free
The Flower King
My Cosmic Lover
In the Eyes of the World
Stardust We Are
~ Encore:
Life in Motion
I Am the Sun, Part One 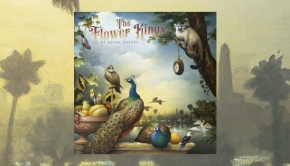 The Flower Kings – By Royal Decree →