On a windy Sunday night, my other half Hazel and myself made the forty-odd mile drive to Abergavenny in anticipation of seeing Talinka live. I was looking forward to hearing their blend of jazz and folk with Eastern and tango influences in the live setting.

The Melville Theatre is an old but well maintained and intimate concert venue with a friendly atmosphere. We were greeted warmly at the door by a member of the Brecon Mountain Jazz Club and were shown to the bar and informed that the music would begin at 8 o’clock. All proceeds from the bar were going to support the Jazz Club, so a good excuse to use it right there. The audience was slowly starting to collect in the bar, many appearing to know one another, and as the start time approached, we made our way to the hall and our seats in the second row for a great close up view of the band. The hall has some tiered seating and the band’s equipment was set up on the auditorium floor. 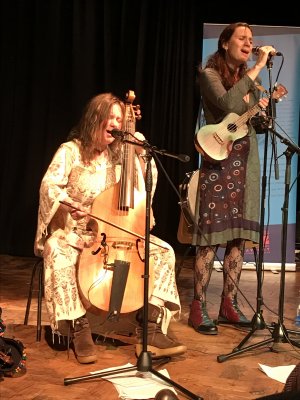 Before things got off to a start, we were given an introduction by a member of the Jazz Club, informing us of their core mission to bring new and talented artists to play in more rural areas with the help of some arts funding. She announced Talinka to audience applause as the lone figure of Gilad Atzmon walked to the stage to pick up his saxophone and play the opening refrain of If I Should Lose You. He is joined soon after by Tali Atzmon who adds her wonderful vocal talents, next Yaron Stavi appears to provide double bass and lastly Jenny Bliss to complete the line-up. As each musician arrived their individual talents combined into the musical whole. The live experience of this band is an organic one, you feel involved as they wrap texture and feeling around each of the songs.

Next come two cover songs, the first of which was a masterful rendition of Greensleeves that showed a band who clearly enjoy what they are doing, and then Billie Holiday’s I’m a Fool to Want You, delivered with the same passion and skill. In between songs, Gilad demonstrated his great sense of humour in a warm and friendly manner, relating well with the audience, also indulging in some lovely banter with his wife Tali, at one point encouraging her to do her animal impressions, completed most successfully I must add. 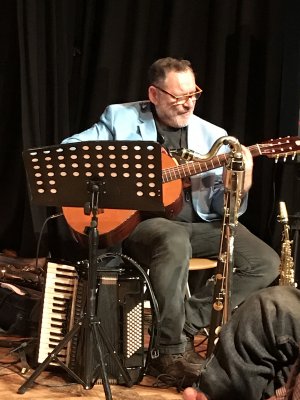 Two original compositions next with the marvellous Four2Tango, then my personal favourite from the new album, Time Runs Out, the enchanting vocal harmonies of Tali and Jenny continuing into the next song, She Moves Through the Fair. The first set closes with a sublime version of the title track from the new album Rainbow Over Kolonaki before it’s time to take a breather and absorb what we have just experienced.

After the short interval, during which I had a very nice and interesting conversation with Tali, set two got underway with Jenny and Yaron giving us some Baroque music by Austrian composer Franz Biber which was enthralling and a joy to hear. The set continued with some original compositions, but mention must go to their version of Scarborough Fair, a song covered by many artists but this rendition is up there with the best. Throughout, they all demonstrate great skill and versatility; Gilad’s accordion playing was wonderful, Yaron’s bass holding the rhythm together, Jenny’s playing adding so many textures with both violin and viola de gamba, and Tali’s wonderfully soulful vocals, along with her new passion, the ukulele. The set closer was Lola, warm and enthusiastic applause encouraging the band to an encore of I’ll Be Seeing You, bringing to an end a magical night of truly fascinating music.

Talinka are extremely talented musicians whose individual skills go to create a magical whole. An evening of pure joy, thoroughly enjoyed by us both, and we look forward to seeing them again very soon. If you get the opportunity to see them live, take it, I am sure you will not be disappointed. 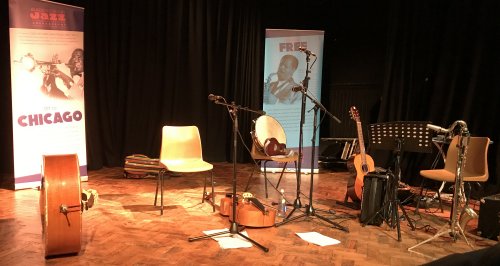 [You can read Mel’s review of Talinka’s Rainbow Over Kolonaki album HERE.]

SETLIST
Set One
If I Should Lose You
Greensleeves
I’m a Fool to Want You
Four2Tango
Time Runs Out
She Moved Through the Fair
Rainbow Over Kolonaki
~ Interval ~
Baroque music
Losing Vision
Scarborough Fair
When Apollo Smiles
When You’re Gone
Every Now and Then
Lola
~ Encore:
I’ll Be Seeing You