British band Wishbone Ash always guarantees a solid dose of melodic rock music, with its distinctive twin-guitar sound of two guitarists playing in unison, extremely recognisable and unparalleled. I have seen them perform many times over the years, the band touring so often that in recent years I have let most shows pass me by. But the prospect of seeing the band perform its biggest hits as part of celebrations entitled “50th Anniversary Tour” was too big a temptation to turn down. So on to the Boerderij, in the company of a much larger than expected audience, possibly there for the same reason as yours truly.

Much to everyone’s surprise, Doris Brendel suddenly appears on stage as an unannounced support act. The enthusiastic quintet from the United Kingdom plays a catchy kind of folk/prog rock in which the red-haired female singer and the guitar player, wearing a top hat and goggles, clearly play first violin. Or rather recorder. Certainly not bad and a great warm-up for the main act this evening. 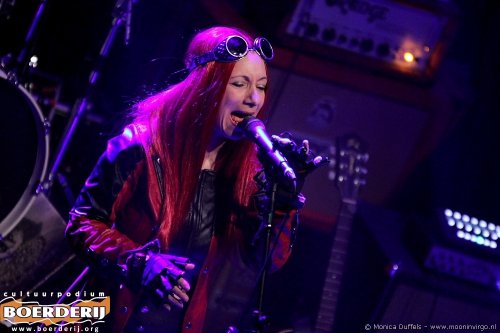 Around half-past nine Wishbone Ash make their appearance on stage. A synthesizer brings in the opening instrumental track Real Guitars Have Wings, immediately setting the tone with the duet between the two guitarists characteristic of the sound of Wishbone Ash. The musicians are visibly looking forward to the show and without much ado The King Will Come from the monumental Argus from 1972 is played, new addition Mark Abrahams taking centre stage on his Tokai. Two other tracks from Argus follow, Warrior, with Andy Powell on solo guitar, and Throw Down the Sword. The audience, that has appeared in large numbers, goes completely crazy. 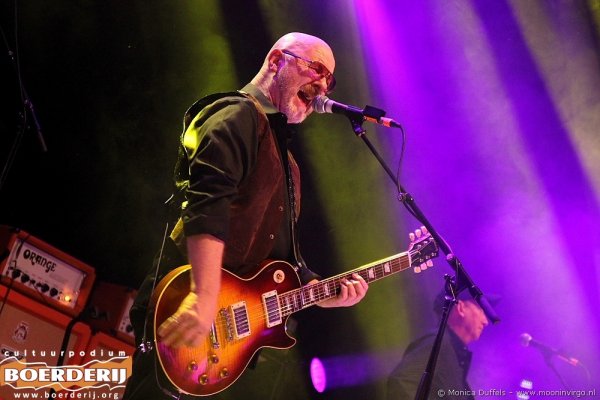 Then it’s time for some new material. Powell himself seems to be surprised by the creation of the new, yet to be released album entitled Coat of Arms. The dazzling We Stand As One has all the qualities that a successful Ash track must have, it surely has the potential to become a crowd favourite. Powell and Abrahams equally share solo spots. The founder/guitarist plays his characteristic black Flying V guitar for most of the evening and recalls the fact that they are in the last week of their winter tour, started in 2019, and celebrating the joyful fact of the band’s 50th anniversary. 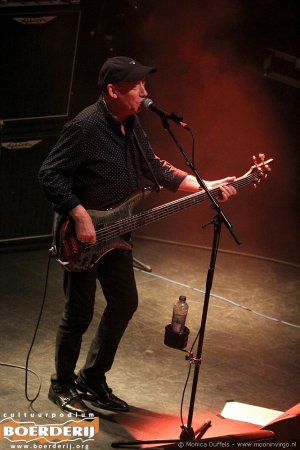 In his soulful voice Powell sings “Keep the wheels turning”, it’s the first line of The Way of the World, which is played in its entirety, both parts 1 and 2. The delightful solo on Living Proof is by Abrahams who takes on the Laurie Wisefield role. The song is a personal favourite, which also applies to the following Standing in the Rain. The Flying V, cut from the marble of the bathroom, at least so it seems (for the fans: a Case APJV) sounds excellent, nonetheless. “I wonder why your face no longer shines”, the opening line of Jailbait from 1971, is loudly sung by the connoisseur audience.

The legendary Phoenix is ​​more than 50 years old, the oldest song on the setlist. In the extra-long version it is just as powerful as in 1969, the thematic bird rising from the ashes is exemplary and directly refers to the name of the band. Finally, Blowin’ Free is the expected thunderous encore, again from the iconic Argus, Bob Skeat’s bass solo deservedly receiving rapturous applause.

The aforementioned Skeat has been around for many years and has been part of the band since 1997. Adorned with his eternal cap (no idea what is under that headpiece), he is not only extremely valuable for WA on bass, but also with his (high-pitched) backing vocals. Nothing much can actually be said of drummer Joe Crabtree, except that he has been part of the Ash since 2007 and plays his parts in an extremely solid way.

Since 2017 guitarist Mark Abrahams has been part of Wishbone Ash, the 41-year-old looks little like a cross between Menno Gootjes of Focus and Hollywood actor Edward Norton. He alternates between playing a light blue Fender Stratocaster and a Gibson Les Paul imitation, a Tokai, and he does so with passion and craftsmanship. So good in fact that band leader Powell calls the current line-up of Wishbone Ash ‘the best in years’. With that he certainly short sells the likes of Mark Birch, Ben Granfelt and especially Muddy Manninen, but I understand what he means. Abrahams fits perfectly with the sound that the legendary band produces with his sharp, flawless playing. He is therefore rightly allocated a proportionate share of the leads, Powell is by no means selfish. 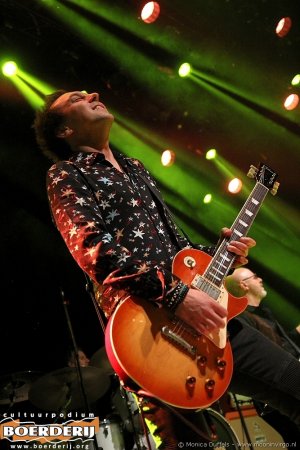 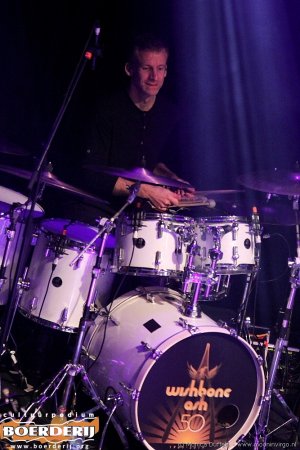 Co-founder/composer/guitarist/singer Andy Powell, the only member of the original line-up, hopes to celebrate his 70th birthday in February. He is clearly in his element this particular evening. The fact that the Boerderij is sold out, according to him, will undoubtedly have played a role in his good mood. Whether the latter is true or not remains to be seen, the fact is that an enthusiastic audience creates a cosy and cheerful atmosphere. Powell is very talkative: about Brexit, Trump, the 18 countries that they visited during this tour and Brexit, once again. He is forgiven for his misconception that education and health care are free in the Netherlands, as well as his advertising for the program booklet and Live in Japan (creative title), which was recorded, you guessed it, in Japan. However, unforgivable is the fact that a band that has been in existence for 50 years and has released dozens of albums is likely to end an anniversary performance after just under 1 hour and 35 minutes, disgraceful!

In truth, this is the only show in the Netherlands, although Wishbone Ash will re-visit the lowlands twice in May. The enthusiastic audience couldn’t care less, more than 600 people have thoroughly enjoyed the Brits’ “greatest hits” show. Light and sound were great as usual this evening, although the latter was a bit too loud, especially during the support act. Whether we will ever celebrate a 60-year anniversary is doubtful, to say the least. But it is clear that the band, with a new album and a young talented guitarist, has fresh blood rushing through its veins as well as a new dynamism. Hopefully we will see these guys perform once again in Dutch theatres in the not too distant future, in which case we would appreciate another half-hour added, please. It can’t be lack of repertoire, right?

SETLIST
Real Guitars Have Wings
The King Will Come
Warrior
Throw Down the Sword
We Stand As One
The Way of the World
Living Proof
Standing in the rain
Jail Bait
Phoenix
~ Encore:
Blowin’ Free