Into the darkness of The Borderline, following a brief chat with the security staff who had determined that at 5’5” I pose no threat – have they not read my Ninja reviews? Still confiscated my Ribena though, meanies. Down the stairs into the vat of, well I’m really not sure as the display of leather trousers from wardrobes past alight thine eyes. So this is where they’ve all gone. In other darkened corners of England are there more music cellars with leather clad Lotharios?

A presentation gig for The Room with another act, Doris Brendel, technically the support act but I decline to put them into that category even though the bulk of the evening was given over to The Room. I was hoping that The Room would be good live having just reviewed Beyond the Gates of Bedlam, I cannot say I was disappointed, only my lack of familiarity with their first album Open Fire gave me any concern and that was down to me not them.

The Room up first with a short set, then Doris, and then a return of The Room for their main set. The short set opened with Carrie, the single from the Beyond the Gates of Bedlam album, and I can report that it is even better live than on record. It has more energy and bigger prog credentials, the audience showing the first signs of the “prog dance” of the evening; shuffle left, shuffle right, stroke chin and nod head. This limited tribal dance will need to expand if the musical energy continues in this vein. Carrie has been embellished live with keyboard flourishes and guitar breaks to make a good opener. 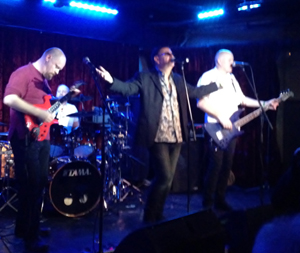 “I should be happy”, yep, no problem there, the barriers that exist in the studio have vaporised, the song’s structure is intact but with more raw emotion it becomes involving and sounds fresher live. Screaming Through the Noise from Open Fire next up, unheard by me but a quick look around demonstrates that others know the earlier material. It starts with a fairly low key piano introduction, a bit Pink Floyd “Great Gig” ish; Martin Wilson opens up with those, as I perceive, (Roger) Chapmanesque vocals. A raw voice, similar phrasing but something else too – individual.

They balance their instruments, no one instrument fighting for aural space. Where there are solos they are just enough. Exactly what you want. Andy Rowe sets his bass free at the start of My Friend Jack, again the live environment shows what a good band The Room are; if they can escape the urban confines it would be nice to see them in a few more places around the country. “Up North” to me is anything above Taunton – please note if you are playing Northern gigs. The Hunter finishes the first set, this is a track that took me a while to get, on the album, but live they stalk an entirely different beast. Much more open as a live track.

So they break, I doodle, make a few notes and decide not to have another beverage from the bar. Oh how I am missing my Ribena.

As they say, Doris Brendel are fish from a different kettle. As they took the stage there is no sign of a female element, making me wonder if it was another of those bands named after some historical character I hadn’t heard of. Not. Doris entered the stage attired as an elfin cross between Kate Bush and Miss Haversham from Great Expectations, and unlike the book I knew not what to expect. 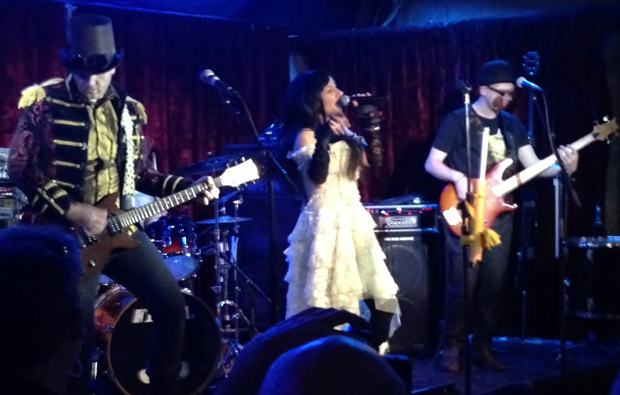 This lady has a cracking voice with a marvellous range, making me wonder with a back catalogue of what appears to be eight albums (at least) why I haven’t heard of her before. A little bit Sam Brown, a little bit Deborah Bonham, and, as previous comparisons have said, Janis Joplin. Musically just when you think you have it, there is a curved ball, the variety mix is great. First thoughts, metal tinged prog with a good female lead, not the operatic style of say Nightwish but bluesy with a touch of Heart. Much heavier for their first track than The Room, they have stage presence and guitarist Lee Dunham has a jacket to challenge the best. A five piece that is bigger than the tiny stage they inhabit for the evening.

You never know what you get with a “support” act, but for the belter of a set Doris and her band delivered I shall decline to call them support. Neither stole the show but made for a great evening with two complimentary but different acts with the vocal ability to rock out and deliver the softer stuff too. I would say worth the price on the door, two very good acts where only the slice of a razor blade divides. To counterbalance the male lead vocal acts I have been listening to recently, I have indulged my love of Lacuna Coil, but even though Cristina’s voice can thrill it was good to discover a strong female lead in Doris without those operatic highs. From the stage banter it is interesting that the players have served other bands such as Wishbone Ash. I did think at one point that they were solely riff and melody driven, but then came the curved balls; harmonies, and great harmonies at that. I listened. I heard. I torture Yaz on their merchandise stall; she speaks without too much torture and I bought Upsidedownworld by Doris Brendel and Lee Dunham (2015, Sky-Rocket Records).

Set over and more scribbling and doodling in dark corners, and recycling my two thirds of a pint. £4.25 beer. Gig loos as expected. Nuff said.

The Room, part deux; main set, and Flesh and Bone from Open Fire. Nothing wrong with it, just not familiar. The Bedlam tracks feel like old friends after a few weeks of listening so the Open Fire material has more of a battle. Splinter, As Crazy as it Seems and The Book; love The Book and more so after this event. The closing numbers were from the first album; 16 Tonnes and ICU showing that they were already evolving as a band as these closing tracks seem closer to the Beyond the Gates of Bedlam material. Chris York keeps a tight rein on the drums, Steve Anderson dispenses his keyboards in the Banks tradition, quietly, professionally and effectively.

I feel a little blessed by what I have witnessed this evening, two great bands deserving of wider recognition, worthy of any event if there is anyone reading this looking for bands to put on. Thanks to Chris, Steve and Andy from The Room for the chat, and making a stranger in strange land (London) feel welcome.