I was due to be joined by my TPA compatriot and fellow scribe Tony Colvill at this event, however car trouble sadly conspired against him (like HRH – he’ll do anything to avoid meeting me!) and so I was left looking forward to this eclectic double header of an experience that recently did a mini-tour across the U.K.

Both names should be familiar to a prog audience, with Doris and her band regularly treading the boards on their own, as well as supporting artists like Fish and performing at festivals. I first saw them at Ian Fairholm’s well-curated Eppyfest in Cheltenham last year. Joe, of course, is the former vocalist for The Enid, now treading his own path as a solo artist. Both provide an exciting contrast to each other. 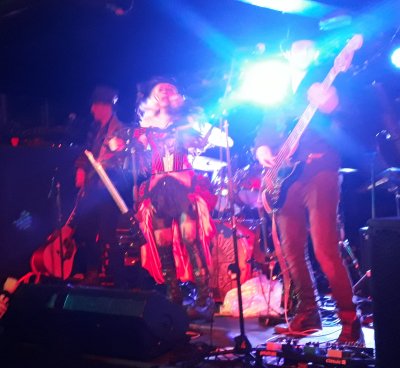 Lets start with first up, Doris Brendel and her band. Like so many gigs, there wasn’t a huge audience, but kudos to all those who came out on a cold March Sunday for an evening of superb music.

As Doris quipped when she saw the size of the audience ‘A VIP crowd tonight then’ (I assume she meant very important proggers!) and, as ever from a band as talented as Doris’, they proceeded to give us nothing but the best in terms of performance, energy and audience interaction.

As anyone who’s ever seen a Doris Brendel show will know, it’s about the performance as well as the music, and as elegantly dressed as ever, Doris brings her steam-prog style to the fore, whilst her dapper band of troubadours have the right attitude in that a live gig is a performance, and there is plenty of sparky interplay between Doris and the amazing Lee Dunham, whose guitar playing is phenomenal, and who, like Doris, has plenty of stage presence and charisma.

Having ploughed her own furrow for the last 30 years (as Joe Payne said in his recent TPA interview, because both he and Doris don’t fit in anywhere else, they fit in the prog arena), but Doris is far more than just prog. For a start, there is that voice, able to switch from full Janis Joplin to Stevie Nicks in one song and manages to send shivers right down the spine during the amazing Crying Shame, which was one of those spine-tingling musical performances where the Gods of Rock combine to create a moment. 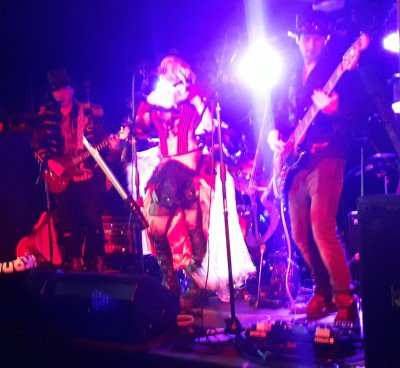 From the sensual Latest Family, the sublime Last Adventure, old favourites like Adored, and the closing fun of Animal, this was a fantastically eclectic set of epic proportions.

With wonderful musical interaction on stage from Even McIntosh on bass, Sam White on drums and Jacob Stoney on keys, Doris has built a formidable musical powerhouse. Again, Lee Dunham’s contribution to the sound is integral, and the way all the band perform together, you can tell that not only are they giving us 100%, but they are having real fun doing it.

The extra touches, from Doris’ gown that lights up, and her trademark torch gloves, are the icing on the cake to what is, in all seriousness, an incredible musical event.

If you get the chance to see them at any time, then you need to, it’s one of the real musical shows on the road now.

DORIS BRENDEL:
SETLIST
What Are You Saying?
Latest Fantasy
Devil Closed the Door
Losing It
Last Adventure
Rather Wear Black
Crying Shame
Slap Me and You Die
Little Act of Defiance
Adored
Why Are You Still Here?
Animal

Joe Payne, having left The Enid, took a little bit of time out to clear his head, and decide where he wanted to go next, and his performance tonight was in complete contrast to that of Doris with her full power rock band.

Mixing the symphonic work he did with the Enid and the direction he’s starting to move into, it was as different as you could get, and of course, the focal point was that voice.

The band were unfortunately missing a bassist due to a recent bereavement, and so they carried on as a four-piece; Joe on keyboards and vocals, Moray Macdonald on keyboards, Oliver Day on guitar and Josh Green on drums. 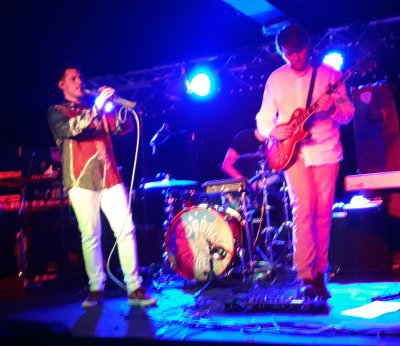 This is Joe’s first tour on his own, and I got the sense that as an artist he is working towards where he wants to go, providing us with an eclectic and intricate set that seemed to me to be ‘the story so far’.

Joe has been incredibly open and honest about his mental health issues, and, as he mentioned in his interview with Tony, it’s what has informed his debut album, and he was open about the subject again during the set. In fact, as a frontman, Joe has that empathy and ability to connect with the audience and has plenty of charm and charisma to hold the audience in the palm of his hand.

Opening with a brace of Enid tracks, the way the epic One and the Many built was sublime, as Joe’s voice held the proceedings until the band and symphonic sound kicked in. That was a truly breath-taking way to open a show and wasn’t like anything I’d seen live before.

Somehow Joe manages to occupy the space between the sound, and then go full symphonic prog in the space of one song, mixing ambient soundscapes with full-on bombastic prog.

The wonderful romp Who Created Me, and the powerful Someone Shall Rise (one of the highlights from the Dust album for me) followed. Almost as if Joe was easing people unfamiliar with his new work into it gently by playing a few Enid numbers.

The eloquent guitar work of Oliver Day on the collaboration Joe did with John Holden, the beautiful Capture Light, showed a different side of Joe’s performance and was really affecting, having quite an impact. If you’re expecting dense guitar driven prog with Joe, then you’re in the wrong room, as he then had some fun with a classical baroque piece set to dance music for a while, which entertained the crowd no end. 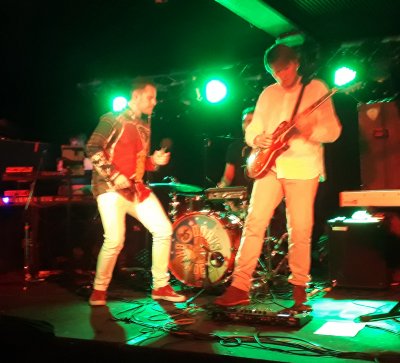 The set was full of big symphonic moments; long intros, huge musical climaxes, and some sublime musicianship from the whole band, and, despite not having a bassist, the band put their all into this.

They finished the set with the two singles, the brilliant What is the World Coming To?, which has a wonderfully catchy chorus, and some great vocal work from Joe again, and the first thing he released post-Enid, the epic and heartfelt I Need a Change. Both show the way Joe is developing and where he is moving as a songwriter and musician, and it’s fascinating to see him work out where he is going and who he wants to be in this live context.

A lot of musicians would maybe not be so honest about their journey, or as frank as to what they’ve been through, but Joe isn’t most musicians. His disarming honesty, approachability, charisma and down to earth nature means you can’t help but warm to him, and indeed get a big hug from him post-show.

He’s been described previously as having a touch of Freddie Mercury about him, and you can see where that comparison comes from, as Joe (indeed like Doris Brendel) is a showman. Somewhere I remember reading him described as ‘musical theatre’ by a disparaging critic, well this was not musical theatre, this was a prog gig unlike any I’ve ever seen, and the approach was fascinating, entertaining, and ultimately spiritually uplifting.

So, in short, an amazing night of music that was so eclectic that I don’t think a box has been made to fit it in, with two of the most diverse and entertaining performers currently treading the boards.

It’s gigs like this that remind you why you got into this scene in the first place, and it’s refreshing to still be uplifted and blown away after having spent over 25 years regularly attending and reviewing gigs.

THAT JOE PAYNE:
SETLIST
One and the Many
Who Created Me?
Someone Shall Rise
Capture Light
Origin of Blame
Moonlit Love
Music for a While
End of the Tunnel
What is the World Coming To?
I Need a Change