On a reasonably pleasant evening the faithful began to gather for the latest Steve Wilson tour to hit the Welsh Capital. After a bite to eat we made our way to St. David’s Hall, where getting into the venue was quick and easy. This afforded us the opportunity to get some socialising done in the comfortable surroundings of one of the bars, and soon enough an announcement was made for us to take our seats as the show was due to start. Tier one, centre stage just above the mixing desk, good job done with the seats then, although in this wonderful hall you get a good view not matter where you sit.

A pre-recording got us underway, delivered like a public service announcement, introducing a short film entitled Truth wherein words and associated pictures were shown, randomly changed with each other as it progressed, all accompanied to jaunty music. During this presentation the band takes to the stage to cheers and launch into the first song of the night, Nowhere Now. in compliment to the high skill levels of the musicians on stage, and it was a great start to an excellent night. This was followed by Pariah, and here good use was made of the screen across the front of the stage with a projection of Ninet Tayeb singing her parts via laptop. It worked well and looked very good. The gauze screen was used to good effect a number of times during the evening and seemed to work better than on previous tours. 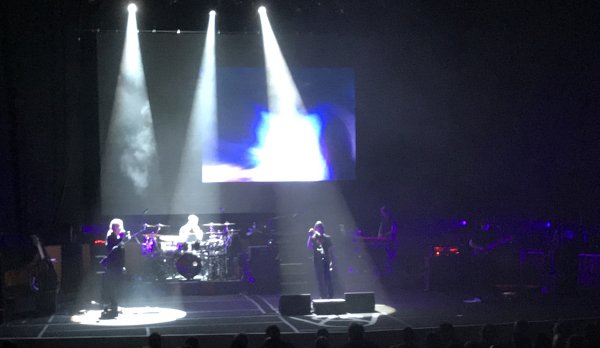 We were to be treated to two sets, split with a short interval, which worked well and did not spoil the flow of the show. The majority of the set was taken up with material from Steven’s latest album, To The Bone, a few from his back catalogue and some Porcupine Tree classics. It was during the first set that Wilson introduced us to his newly found guitar, a ’60s Telecaster which he informed us has changed the tone of his songs, and it truly does have an amazing sound, enhanced by the live setting. At this point he stressed that this was a “rock show” and that we, the audience, should not sit down, we should get up, dance and show some enthusiasm; “I hate seated audiences…err…seated venues. I won’t be playing seated venues again”. OK, fair point if that is how he feels, but it is puzzling why he would seek to potentially alienate perhaps a third of his audience, as a fair proportion of his fan base are of a certain age – me included – and may find standing for nearly three hours hard going. Later in the run of U.K. shows Steven noted that his favourite place to play is the Royal Albert Hall, so as a seated venue does that mean that he won’t be playing there again either…?

The music continues and the final two songs of the first set where nothing short of outstanding. This is some masterful band, but special note must be made of the important contributions from Craig Blundell and Alex Hutchings who have seamlessly fitted into the group.

After the short break we’re back with a high intensity delivery of Arriving Somewhere But Not Here, the next song, Permanating, being introduced as an “anomaly in my catalogue”. It’s not one of my favourite songs from To The Bone, probably because it sounds so out of place, and throughout Wilson tries to encourage the audience to be spontaneous, to shout out and let the band know that we are enjoying ourselves. A good natured Welsh crowd never needs to be asked twice, and duly obliged, during which he again made reference to seated venues. At one point the audience were so invested in shouting out that Wilson was unable to talk due to the interruptions, he did appear to be a little miffed by this, turning from the microphone and ushering the band into the next song. No worries, as we were given an outstanding version of The Same Asylum As Before followed by the Porcupine Tree standard Heartattack In A Layby. The band were on fire by now, making it all look easy and effortless, which of course we all know it is not.

The encore comprised three songs, with Steven performing Even Less solo using his new Telecaster, giving the song a whole new tone and feel. The night ended with an excellent rendition of The Raven That Refused To Sing, sending the crowd home happy, but with that touch of melancholy we have come to expect.

A great night, and an excellent performance all round, but I was left with a strange feeling; the labouring of the point about seated venues in one of Wales’ premier concert venues, for sound comfort and ease of access. This issue was brought up by Steven on at least three occasions, which is ironic since there were a number of times during the concert where Wilson sat on a stool in front of the microphone to sing. If standing venues is the way he is going then it may be the last time I will see him live, which is a shame as I have enjoyed his work for many years. Good job the (maybe) last one was a great one then. 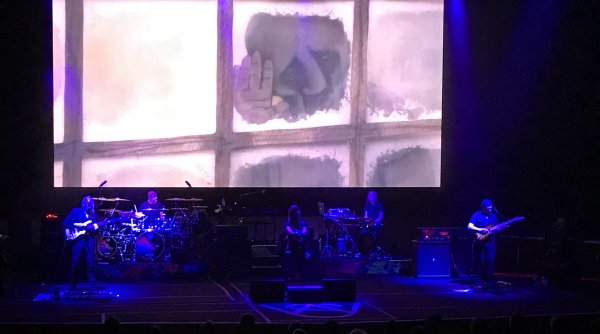 Steven Wilson is in a playful mood. As the lights go down, he ambles to the front of the stage and gazes out over the audience. After the ‘consummate professionalism’ of the previous evening’s show, he announces, tonight will be ‘very different’. He conducts a survey of the audience to find out how many people attended last night, how many were attending tomorrow night, nods sagely and wistfully confesses he might well have to ‘mix it up a bit’.

Having revealed that plans for a support band hadn’t worked out so well, he then launches into a spellbinding acoustic set of songs drawn mainly from the Porcupine Tree catalogue. Pausing after the fourth song he comments: “Who’d have thought after 10 minutes at a Steven Wilson concert you’d have already heard four songs? Usually I’m just warming up”. Introducing Adam Holzman on keyboards, he continues with How Is Your Life Today? before switching his attention to the project he shares with Aviv Geffen and a fabulous rendition of Blackfield before closing with the entrancing Postcard.

As an appetiser it certainly rallies the already enthusiastic audience and ramps up the levels of expectancy even further. It also tells us two things. The first is that Wilson feels supremely at home on stage. The levels of care and intimate attention to detail he lavishes on his studio production is no less evident here. There is nothing ad hoc about this performance. It may be natural, it may well be straight from the heart, it may give the appearance of being delivered with a fresh sense of gusto and energy but he is not a man who leaves anything to chance and despite his claims to the contrary it is executed with a carefully studied and loving perfection.

Second, this tells us something of even greater importance. Wilson is a man of incomparable poise and finesse. Music is only one aspect of what captures his attention and imagination. What captivates him even more is the ‘experience’ he is trying to communicate off the back of what his music allows him to do. As the second set begins, the short film which precedes the band taking to the stage, the projected animated story which later accompanies Routine show a fascinating concern with blurring the lines between the musical and the visual. They both enable each other and Wilson uses the music, the lights and the films to build intricate and creative mosaics. 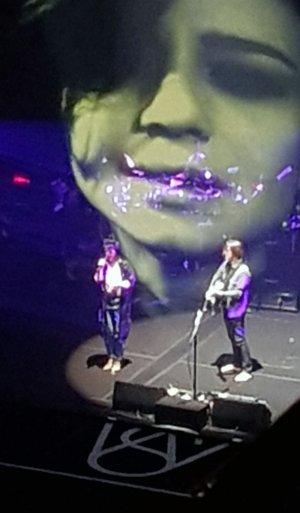 These include the wonderful contributions of the individual band members and guest performers as well. Wilson does not hog nor seek the limelight. He understands that the experience only works because of the space each musician is given to bring their own skills and distinctiveness to the show. Ninet Tayeb is sublime in conveying a beautifully nuanced and emotionally sensitive set of vocal performances, both as support as well as lead singer. The duets and harmonies with Wilson throughout the evening are a joy to behold.

Mark Feltham brings a lively spirit and passion with some dazzling harmonica solos on To The Bone and Refuge. Dave Kilminster also joins the second set for Home Invasion and Regret #9 (apparently, Wilson tells us, having reduced his appearance fee to just six figures tonight!) for what is a truly frenzied and blistering momentum builder before the second set ends with the gorgeous Happy Returns, delivered with such exquisite grace and tranquillity it brings a tear to the eye.

The third set feels a little darker. By his own confession, Wilson revels in misery and People Who Eat Darkness, closely followed by another Porcupine Tree song Don’t Hate Me has an uncomfortable and menacing feel. Yet he surprises us again by an interesting change of tack and an illuminating revelation. Making the audience stand for Permanenting he is self-deprecating in taking time to ‘thank’ people for their comments and thoughts about this song. But what he goes on to offer us is an ode to his two musical heroes growing up – David Bowie in the ’80s and Prince in the ’90s. He is particularly careful to emphasise why: because, he tells us, they pushed the envelope whilst managing to enjoy mainstream success.

Listening to the rest of the set after this, things suddenly make sense. This is the model to which he aspires. This is why he cares so much, not just about the music but why it is important for him to blend this with film, lighting and even the spaces in which he performs. Whether it is The Same Asylum as Before, or the thundering Porcupine Tree Heart Attack in a Layby, whether it is Blackfield or any of his other projects, his attention is precisely set on the ‘bigger picture’, the holistic experience, using every means available in the 21st century to get his music to permeate and push the boundaries of modern culture.

As he comes out for the encore there is an undoubted sense of triumph and a feeling of ‘mission achieved’ as he assesses our rapturous applause and encouragement. I last saw him in January 2016 at the Eventim (I’m sorry, for me it will always be the Hammersmith) Apollo. That night he was brilliant. Tonight, he was something special – and looking back it is clear to see the progress he is making, the evolution he is bringing to progressive rock and the hugely well deserved success and resonance it is striking and inspiring in the increasingly wider audience he is attracting and bringing in to the fold.

If you get the chance, go see him. It will be a night you will never forget. 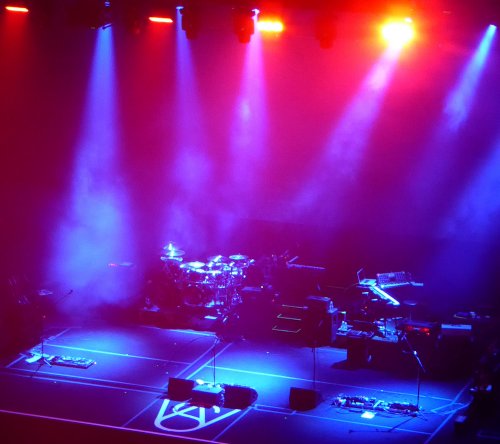