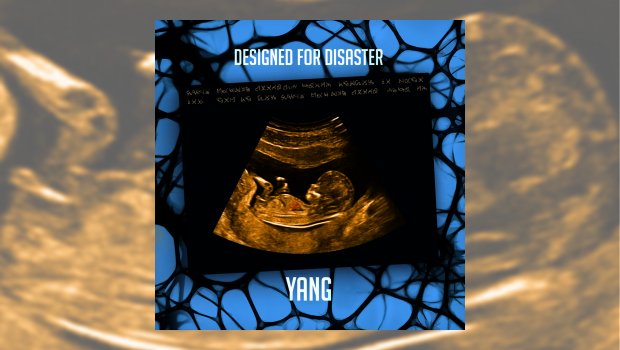 Fréderic L’Épée, the sole composer for Yang, seems like an interesting chap. He has an interest in minimalism, Chinese language and culture, the guitar (Robert Fripp is his guru) and his favourite composer is Johann Sebastian Bach. Stick those influences in a blender and what you get is the latest album from Yang, Designed for Disaster. Since Yang is a four-piece band comprising two guitars, bass and drums, the most obvious influence from that list is definitely Fripp, but the rest are all there, and investigating the resulting music is very worthwhile.

Nowhere is the Fripp and Crimson connection more obvious than on the third track here, Disentropy. It’s one of the darker pieces with an ominous feel as guitars and bass explore minor progressions, only to be interrupted by crashing heavy chords as the drums join. It’s all very Larks’ Tongues, and sounds menacingly delicious. Similar themes and atmospherics crop up again throughout, but there’s much more on offer. Yang usually plays instrumental music, but on Designed for Disaster three songs feature lead vocals, which are provided by German singer Ayse Cansu Tanrikulu, and these all work really well. The first of these songs is album opener Descendance which is both accessible and unsettling at the same time. The lyrics suggest a world going wrong, but the exact meaning is left to the listener to decide. That feeling pervades the album, a sense of foreboding as things are unravelling. Given the state of the world now, it captures the moment without ramming the message home overtly.

The second vocal track, Flower You, is possibly the poppiest song here, but even this isn’t the easiest of listens. Tanrikulu’s sweet vocal delivery as she intones “unintentional disaster” and similar lines is poignant and yet seems to suggest some hope, some light at the end of the tunnel perhaps? Perhaps not, as Unisson follows, and although the guitars of L’Épée and Laurent James and the bass work from Nico Gomez weave an elaborate and beautiful spell, the undercurrent of menace is ever present.

Another notable and unsettling track is the rather odd Words. Against the marching drumbeat of Volodia Brice, discordant and distorted guitars wail, and the band chant out seemingly random words, issued like orders from some figure of authority. These cacophonous sections are contrasted with quiet guitar passages. It’s unnerving and uneasy. For me it conjures a world where fake leaders try to dictate to the masses, but who have only self-interest at heart. Can we resist?

The magnum opus on Designed for Disaster is the lengthy (10-minutes) Migrations, and it’s the last of the vocal tracks. It’s a superb piece of work, featuring difficult time signatures and fabulous guitar work. It is also very melodic, albeit in a rather abstract way, and again Tanrikulu excels as she picks out the off-kilter melody and makes it very listenable. The piece takes time to build, and in places has a Starless feel to it, but it’s fleeting and wholly original overall. It’s definitely my favourite moment on an album with many high points. The final songs which have to be mentioned are the closing two pieces. Interlude – Décombres is a short piece with definite Chinese flavours, the twang of the guitars like dripping water forming a backdrop to some Frippery on the guitar from L’Épée. It makes a lovely intro to Despite Origins, an ingenious track which starts out as a guitar fugue with a nod to Bach, developing into a more traditional guitar workout, then moving quite suddenly into a Gothic closing piece which has to be inspired by Carl Orff, its operatic but dark and dramatic vocalisations giving way to guitar taking up the theme. It’s an extraordinary and dark ending to a great album, and proves L’Épée to be a fine composer. I’ve never heard anything quite like it before, and I will certainly be exploring earlier work from Yang on the strength of this.