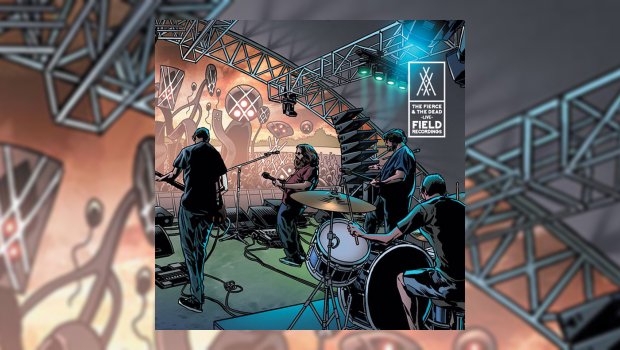 The Fierce And The Dead – Field Recordings

Formed in 2010 The Fierce And The Dead (TFATD) are a four piece instrumental rock band from London who have now released a number of EPs and albums, their first for Bad Elephant Music being Spooky Action in 2013. They have blended a number of musical styles to successfully create a sound of their own, adventurous and exciting, especially so in the live setting. They have been compared to the likes of King Crimson and Black Flag, their instrumental music using interlocking guitars, combining epic post rock, math metal, psychedelia and punk elements.

Clocking in at around twenty-nine minutes this album does not hang around, and leaves you wanting more. There are six tracks included, four from across three of their releases plus two previously unreleased tracks which may or may not appear on their third album. The selection was recorded by Liveherenow at last year’s Ramblin’ Man festival where they played a blazing set, mixed and mastered by the band’s Kev Feazey who has done a great job in maintaining the great live vibe that the band are well known for.

I have been fortunate enough to have seen TFATD live on a number of occasions and they have never failed to please, my most recent memory being their opening slot on the Saturday of the Summer’s End Festival in 2015 where they gave a lively, energetic and powerful performance which stunned the audience and certainly added to their fan base. A fine response to the temporary clearing of the hall after an over enthusiastic fire alarm.

From the crashing opening two minutes of Magnet In Your Face, we are treated to a tour de force with the segue, via some great bass from Kev, into Ark from Spooky Action where their harder edge is tempered slightly by a melodic guitar. The on stage banter which is a feature of the live set is included, with Matt at one point imploring the crowd to buy some of the merchandise so they can get home. They continue through four more powerfully performed songs, including the previously unreleased Dancing Robots and Verbose. Dancing Robots gets underway with a bright, chiming guitar to a lively, almost shuffling beat from the rhythm section. The focus switches to a harsher riff as the song ebbs and flows, with Crimson-like touches. Verbose, which Matt announces has only been played once before live, is a top quality track that highlights very well what this band can do, a fast paced guitar leading us in before some great bass and drums, reminiscent of Nomeansno at times, the guitars providing some great runs. The whole thing feels edgier, somewhat punky as the song just fizzes along, a ‘Classic Rock’ guitar solo thrown in towards the end. A top quality song, which I do hope will appear on the next album as it’s sure to become a live favourite. The whole set concludes with a rousing version of another fan favourite 666…6.

A great release to put out just prior to their live debut in the U.S. at ROSfest in May, this is an excellent way to sample a live experience from the band, it demonstrates the intuitive interplay that the four have with each other, the power and drive of the music, but also the subtleties that are employed throughout. Overall a very powerful, loud and exciting declaration of intent, I have thoroughly enjoyed this album and I urge you to give it a listen. No, buy it. Or go and see them live. Better still, do all three and you won’t be disappointed, I never have been.