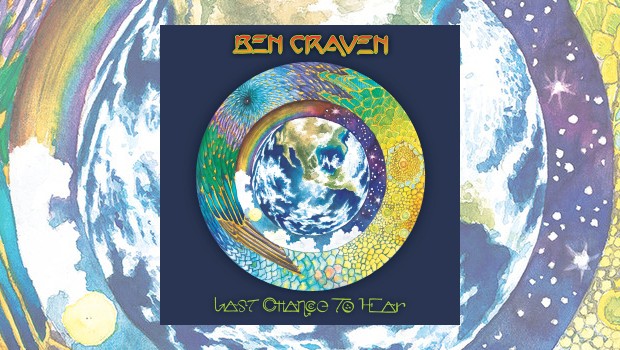 Last Chance to Hear is the third album from Ben Craven, who is described as an ‘Australian cinematic progressive rock artist’. The album was apparently inspired by ‘the end of the music industry as we knew it’, Craven feeling that the album format is in danger of extinction. Deciding to dedicate his album to that theme, he does this successfully with great skill and an undoubted sweeping cinematic scope – it is easy to imagine much of this music as parts of film scores.

The album opens with the distinctive and evocative sound of a needle hitting vinyl, which tells us all we need to know about the theme and feel of this album – it is unashamedly retro in it’s influences and vibe. Craven quotes his ‘usual suspect’ inspirations as Pink Floyd, Mike Oldfield, King Crimson and Yes, and that influence can be clearly heard in much of the music. Indeed, Craven even employed the artistic skills of legendary Yes album cover designer Roger Dean to illustrate his previous album Great & Terrible Potions, which indicates where his musical heart lies. However, alongside those influences the cinematic spirit is clearly imbued into much of his work, and it is no surprise to find that Craven also cites film composers such as Bernard Herrman, John Barry, Henry Mancini and John Williams as significant figures in his musical development.

Last Chance to Hear, Part 1 opens quietly before tripping along quite lightly, almost in a pop style with Craven’s soft vocals before the track erupts with some impressive drumming with a much harder edge, and some Gilmour-like guitar playing over a furious driving beat. The film-like quality of the music is enhanced as we segue into Critical Mass, Part 1 with tinkling keyboards and spacey effects under choral sounds. Critical Mass, Part 2 slides in impressively, seamlessly building into a rocking almost James Bond theme feel. This song won ‘Best Instrumental’ at the 2016 Australian Independent Music Awards. It is especially noteworthy that these well-orchestrated and very well played pieces are the work of just one multi-instrumentalist. Ben can feel very proud that he has produced an album so reminiscent of his heroes of the early Progressive rock era, and make no mistake – this is definitely an ‘album’ that is best heard as a whole as many of the pieces are inextricably linked with seamless segues.

Spy in the Sky, Part 2 is particularly impressive in its Floyd-like chiming atmosphere, keyboards escalating ever upwards until we break through the musical clouds into light with delicate acoustic guitars over the keyboards. This is all a preamble into Spy in the Sky, Part 3, perhaps the track that will attract most attention on this album as it features the unique vocal stylings of William Shatner, aka Captain Kirk of Star Trek fame! Craven has explained that when he had completed the lyric he could only really hear in his head a speaking voice delivering it. Shatner agreed to do the vocal in his inimitable style, and whilst he may have previously been known for some rather idiosyncratic vocals on his own records, it has to be acknowledged that, strangely, his style works very well in the context of this song. There is a science fiction atmosphere to the melody, and Shatner’s rather grand and theatrical delivery suits the dramatic tone of the music.

Whilst the opening half of this album is engaging and of high quality, the latter part is less compelling, and strangely inconsistent in atmosphere. Craven is clearly an ambitious musician and some of his pieces work better than others. The Remarkable Man and The Revenge of Dr Komodo failed to fully engage this listener with their strange melange of angular styles and peculiar vocals. However, some may delight in the variety provided by these diversions. Spy in the Sky, Part 1 returns to more assured Floydian ground (I have no idea why Part 1 comes AFTER Parts 2 and 3!). Last Chance to Hear, Part 2 is an impressive finale to the album, commencing with soft rippling acoustic guitars over which a slide guitar floats majestically, before the song descends into a maelstrom featuring some scintillating guitar, work out of which develops some bluesy organ. The coda piece, Mortal Remains, delicately concludes the album with piano, and one can almost see the credits rolling on what has undoubtedly been a cinematic soundtrack without a film. The visual element of the album’s attractive design is the beautiful cover artwork provided by Freyja Dean, who also provided the artwork for the debut album by Synaesthesia (now known as Kyros). She is the daughter of Roger Dean, but like this album, whilst the connection with the past is clear there is also a distinctive quality in this work by a new generation of artists, both musically and visually.

Music can be such a strange thing at times. This album was received for review last summer, but various factors have delayed it. The initial thoughts of this reviewer at that time leaned more towards a sense of disappointment. However, upon returning to the album first impressions were “Why did I not review this much earlier?!” Perhaps it is that over time the themes and music initially heard have found more fertile ground in the imagination since, or maybe back then personally it was just not the right time to hear this album. There are some flaws for this listener, but they are more than outweighed by the positives in this finely executed work. I can only apologise to Ben Craven for taking so long to finish this!

Last Chance to Hear is a good example of the album format of the heyday of Progressive rock in the ’70s, which Craven so clearly respects and wishes to emulate. He pulls it off well with his diverse musical skills and active imagination – let’s just hope there are some out there willing to take the risk and help keep The Album alive as an art form!