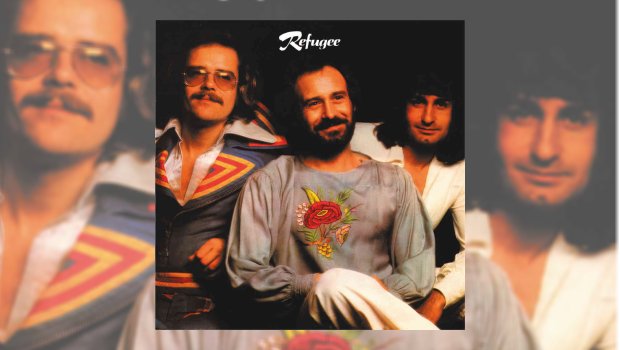 This review covers the recently released boxed set of three discs from Esoteric Recordings, comprising the sole album, recorded in 1974, for the Charisma label by Refugee, a trio of Patrick Moraz (keyboards), Lee Jackson (bass and vocals) and Brian Davison (drums). The set also includes the unreleased 1975 BBC In Concert recordings and a CD taken from a sound desk recording, previously issued in 2000.

Refugee were a very short-lived affair, introducing the Prog world to the formidable talents of Swiss keyboard player Patrick Moraz. The album, remastered here by Jean Ristori in conjunction with Moraz, was a very impressive statement featuring just six tracks, two of which were over 16 minutes in length with two further instrumentals. For an album recorded over 45 years ago this is an incredible record and the musicianship it contains puts Patrick Moraz into the upper echelons of keyboard greats like Keith Emerson and Rick Wakeman. Emerson was highly impressed with the record, so much so that he taped some footage shown on the Old Grey Whistle Test of the group shot at the Marquee.

Patrick Moraz, of course, went on to replace Rick Wakeman for a while in Yes, recording the highly charged Relayer album with them, subsequently joining the Moody Blues when Mike Pinder left in the late 1970s after the Octave album. He also recorded several fine solo albums for the Charisma label, including The Story of I, which will possibly be known to many from The Hitchhikers Guide to the Galaxy using one of his melodies for Zaphod Beeblebrox.

The other two members of Refugee had previously been part of the Nice (along with Keith Emerson) and they duly found themselves unemployed again when their keyboard player was half-inched by a bigger band, but even so this set is a great and eloquent reminder of the sheer promise that Refugee had, which, sadly, they were not quite able to fulfil, for various reasons.

If you don’t know this album then I strongly recommend that you take steps to check it out as it will be a revelation to you. In fact, seldom since the ELP debut in 1970 has such powerful keyboard virtuosity been heard, especially on the longer tracks where Moraz employs all the skills in his arsenal to fine effect.

The album opens in strong style with the instrumental Papillion, right from the off Patrick’s keyboards making a significant impact, full of flair with great Hammond organ alongside sturdy drumming from Brian Davison and a pumping bass from Lee Jackson. Soaring synth lines enliven matters and this is a great opening statement of intent, calling for some serious notice.

This is followed by Someday, which features Jackson’s vocals. They are somewhat an acquired taste as he is not the world’s best singer, but he gives it some effort here and it does allow for some fine piano and synth from Patrick. The song is not too long and does not overstay its welcome, setting us up for the first of the epic tracks with The Grand Canyon Suite unfolding over its 17 minutes. It opens with alpine horn and keyboards with some nimble bass runs from Jackson and percussive flourishes from Davison before the Theme for the Canyon is unveiled. This is a very atmospheric and dynamic piece that sustains its momentum as it flows. The keyboards use many tones to convey the movement of the river through the canyon. All very impressive stuff, and for its age rather remarkable, Patrick Moraz was only 26 when he recorded this album. There are more vocals from Lee Jackson as he sings about eagles flying over the canyon walls as the river trips and falls below, all very evocative and dramatic, as is the music that accompanies which shows the skill that Patrick has at his fingers. With much of the song being composed by Patrick alone, this is a very impressive piece indeed.

Just before the 10-minute mark there is a very ELP-like part with lots of stabbing keyboard and organ sounds, drums being used to great effect before morphing into some very jazzy synth lines and more sturdy drumming to carry it along, a strong and vibrant track that shows great skill and promise. This song has it all, some fabulous keyboards sounds and sections with everyone playing at the top of their game. The sound is very clear and defined and Patrick sizzles and shines throughout, so much so that you can see why Yes came knocking for him. He is simply phenomenal here, his playing is inspired and he’s on fire. The song ends with drum rolls and the sound of the river rushing onwards, a simply amazing track.

Then we are onto a very short piece of solo keyboard and synths called Gate Crasher, very short but acts as a prelude to Ritt Mickley, named after a misunderstanding between Brian and Patrick over Patrick’s inability to express the word ‘rhythmically’ in English. It’s another instrumental that shows Patrick’s great skills, his sense of rhythm, timing and dynamics, the result being this fantastic piece of work.

The final track is called Credo and is also the longest at over 18-minutes, with an array of keyboard sounds, textures and styles, although the piano work alone is exemplary, and the synth work is also very fine.

The next CD features a short three song set from the BBC archives of a 1974 show that includes longer versions of Ritt Mickley, Someday and The Grand Canyon Suite, all of which sound glorious and show the calibre of the live shows this band were able to put on. The longer versions benefit greatly from having the room to stretch out a little more. A simply phenomenal act, it’s tragic that this was curtailed by developments outside of their control. The standout track here is, of course, The Grand Canyon Suite which has great dynamics and is a very strong piece of complex music which remains exciting throughout. There is no waste or excess flab, everything has a place and is crucial to the song unfolding, all expertly played. This must have been a real delight to witness live and no doubt blew people away with its sheer brilliance. Here it certainly shines brightly.

This great, albeit brief, CD is supplemented by the 2001 release Live at Newcastle City Hall which features most of the debut album plus three non-album tracks. These were mooted for the sadly never completed second album, again another fine display of dexterity and musicianship are on display.

This reissue is very welcome and there is much for Yes or ELP Fans to enjoy as you marvel in what was and what could have been.