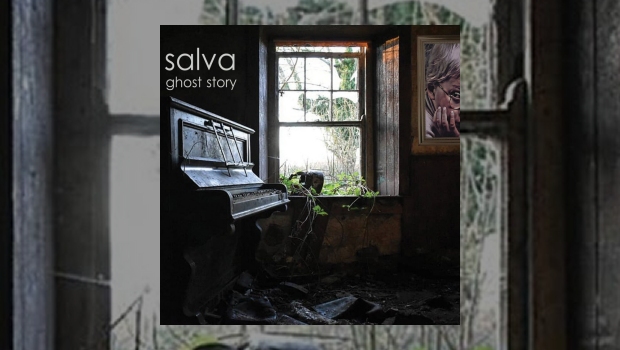 Swedish Progressive rock band Salva have recently released their latest album, Ghost Story, on Rob Reed’s White Knight Records. The band formed in 2003 in Gothenburg and have previously released six albums, the first in 2004 with three since 2018, so they seem to be gathering momentum. Ghost Story is their first ever concept album, described by composer Per Malmberg as “a simple story of a shy, introverted boy who discovers an overwhelming passion for music at an early age. The music helps him escape the ordinary world and social interaction, which he finds a bit intimidating and alien.” Salva develop this story as an imaginative vehicle to interweave an engaging mix of progressive rock, hard rock, pop and even hints of folk.

Ghost Story commences with an impressive trio of pieces which exemplify the fine song writing skills of main man Per Malmberg. These three compositions introduce us to a young man awakening to the enchantment of music, then his discovery of the joys of a piano, and then the fateful first gig with his band. Opener Awakening starts with a Mellotron and then the full band joins with a synth melody overlay. If these sounds do not give away what music the main protagonist is falling in love with then the lyric places us squarely in the midst of the “sweet ecstasy” of classic progressive rock:

“Let the sound take me away to a land of Pink and Grey
Where we’re all Ready to Dine, and the Precious Diamonds Shine
Let’s set sail on Lunar Seas, where the Fish is swimming with ease
Steer into the Heart of the Sun, to where And You And I become one”

Sure, the references are about as subtle as a Brick (presumably it would be a Thick one?!!), but Salva win you over with the opening angelic voice and gentle piano before spectral harmony vocals take us on a trip through a landscape of Prog titles… however, before it all becomes a bit too cloying, Salva hit you right between the eyes with a piledriving rock riff and a stellar rippling solo over a crunching main theme. Salva have clearly not forgotten that progressive rock does actually include the word ROCK, and this piece thunders along… they even throw in a mischievous reggae riff later on. This is a thrilling piece of old school ‘Prog’ with some quirky elements. Erik Zetterlund drives this opening behemoth on with fine drumming, deftly switching from subtle to heavy with great dexterity.

Awakening is a captivating and vibrant piece to open Ghost Story and grab the listener. Salva make sure to keep one’s interest on the following Discovery. It which opens with a pastoral 12-string guitar early-Genesis style intro before the piece erupts with an ’80s Marillion swirling keyboard fanfare and a soaring electric guitar. A forceful rocking theme drives the story on with lyrics very akin to the main character in Rush’s 2112 discovering a guitar, only this time our hero stumbles across a piano, stating ecstatically “I am Born, I am Free, this is Me.” This is a real ear worm of a song with a catchy melody, slick guitar work and some ethereal harmony vocals, portraying the central ‘Ghost’ character.

The album’s opening triptych is completed by the real toe tapper, Gig, in which ‘Ghost’ starts a band with his friends and they get their first gig. The catchy power pop / rock conveys the excitement of a young band preparing for their first ever concert. Gig opens with a rocking, jazzy electric piano and grooving band – it would seem Salva can really rock out as a live band, as this fizzes with energy and fun… But – and it’s a rather large ‘BUT’ – things do not go according to plan as ‘Ghost’ is paralysed with stage fright. The concert is an absolute disaster with Gig ending in a plaintive and eerily distorted melancholic guitar solo, over some lithe bass playing from Daniel Nätt.

The dramatic title centrepiece of the album is an ambitious and diverse further exploration of the desolation and devastation felt by ‘Ghost’, as he listens to his band gamely trying to carry on without him. Even the kind words of a barmaid at the end of the evening are bitter sweet, as our hero belatedly realises that her boyfriend is waiting to take her home. Ghost ranges across a range of musical styles and sections, including a late thrilling tumultuous section with a pulsating Porcupine Tree-like drive, with great guitar and keyboards. This extended piece is also a showcase for the fine musicianship of Per Malmberg, who shows equal skill with guitars, keyboards and the somewhat less typical accordion and mandolin. However, after this excellent opening trio of songs this piece loses some of the momentum for this listener as it lacks the flow, catchy melodies and hooks that saturate the opening section of the album. To be fair, Ghost is still a quality piece of progressive rock, but it does not engage in quite the same way. There is also a more sombre atmosphere in the second half of the narrative as the main character has to come to terms with the humiliation of his debilitating stage fright. There is also a curious contrast between the rather swinging final section, which rolls on with accordion in a ‘sing song’ fashion, and the bitter disappointment felt by the main character.

Everysong takes the story and the music in a very different direction, led by piano and softly rolling drums. Narratively, this song makes sense, describing how ‘Ghost’ withdraws into the solace of writing his music alone at home. At the same time, it is also the lowest point of the album both musically and emotionally. Its attempt to convey introspection and melancholy, tinged with hope comes across rather too sombrely without enough substance to engage the heart of this listener… and the device of harmonising (and treating?) ‘Ghost’s vocals grates against generating the intended softly emotional feel. Never fear though, redemption musically arrives with the final extended piece Score, which lifts the album back to the heights of the opening half of the Ghost Story.

Score is a redemption for the album thematically as our main protagonist is contacted by a Hollywood film producer to write a score for a movie, thereby allowing him to express himself artistically without suffering the nightmarish experience of stage fright. A slowly rising chiming and tinkling keyboard opening suggests a sense of growing hope before a triumphant guitar led riff takes up the sense of positivity, the initially more melancholic vocals reminding us that before this redemption he is a musician condemned to writing songs which he cannot perform publicly. Marillion-esque keyboards and power riffs presage a break in his musical clouds and the telephone rings with the good news that will change his life (although the rather sombre vocals at that point do not seem to reflect the joy!). Nevertheless, over a Mellotron canvas the drums thunder and guitars scream in an explosion of emotion. The sense of release and celebration imbue the melody and vocals before a sinuous synth solo ascends joyously and the power chords return. The finale rolls along positively on a wave of keyboards, guitars, Elton John-like piano and overlapping harmony vocals:

Score brings Ghost Story to a suitably triumphant and hopeful conclusion. Setting aside slight reservations about a slight loss of momentum in the middle, Ghost Story is undoubtedly a very well written and skilfully performed album of engaging rock with an interesting array of influences. Somehow Salva have not appeared on my radar previously. On the evidence of this largely excellent album, Salva’s back catalogue is certainly worth exploring, and we can look forward with anticipation to future high-quality albums from this fine Swedish band.