Paard, The Hague, the Netherlands
Friday, 6th May 2022

How unfortunate, the announcement Supersister frontman Robert Jan Stips had to make on 19th November 2021 – the day of the Supersister concert at the Hague Paard – that this concert, together with the other two last shows on their club tour, had to be cancelled due to his Covid-19 contamination. The band had just picked up steam, the club tour in the autumn of 2021 was a success, not least because of the special line-up as a super trio, with Rinus Gerritsen on bass and Léon Klaasse on drums. Fortunately, now is the time to complete the aborted club tour, which means that Ulft, The Hague and Eindhoven can still enjoy gigs by the renowned trio. On a sun-drenched day in May, the time has finally come: Supersister Projekt is playing at Paard, in my very own backyard, The Hague. 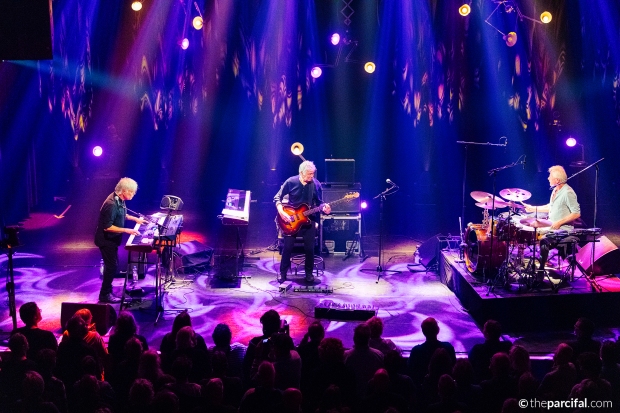 After an instrumental intro on tape, the band enters Paard’s stage to thunderous applause. Early Floydian psychedelic sounds in opener Judy Goes on Holiday, a short medley with Memories Are New as the main part, including Dreaming Wheelwhile, continues this trend. The music of Corporation Combo Boys/Mexico is clearly inspired by Frank Zappa and dates back to the time the band performed at the famous Holland Pop Festival in Kralingen in 1970. The song seamlessly flows into the iconic She Was Naked with an amazing solo by Robert Jan.

Also in Psychopath, a lot of brilliant piano playing. The song, about the time when the band frequently played the institutions for the mentally ill in and around the region north of The Hague, comes from the iconic Pudding & Gisteren from 1972. After A Girl Named You from second LP To the Highest Bidder (from 1971), a medley with some old/new material, a result of a mention in the Supersister biography Looking Back, Naked. These are mostly unknown, never before released songs that, fortunately, were once recorded on cassette. 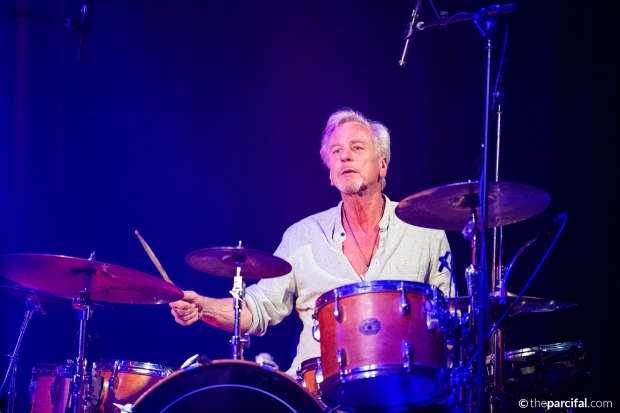 Hope to See You There Again is dedicated to a number of deceased friends, in particular the band’s recently deceased ex-manager Rob Douw. A solemn highlight in the set, this song from Retsis Repus. Apparently, fear of flying and pride of travelling by train are the lyrical themes of the Nits-like Max Eco, also from their most recent album, released in 2019.

Energy (Out of Future) is presented by Stips with a juicy anecdote about their then manager, an economics student, whose textbooks and a large dose of psychedelics provided the inspiration for the song. I Am You Are Me stems from a famous documentary for Dutch television about the band; an additional number was needed. The most Supersisterian song contains a brilliant piano part by its composer and a great drum solo by Léon Klaasse.

Just three words for a title, Wow Wow and again Wow, also known as ‘the intelligent number’. A sort of protest against the reputation the band was given at the time. Stips initially dismissed the song as ‘rubbish’. But after listening and mixing for a recently released live album from 1972 (Live in Scheveningen), it was now re-labelled as ‘really good’. Including John Lord-esque, heavily distorted organ solo. 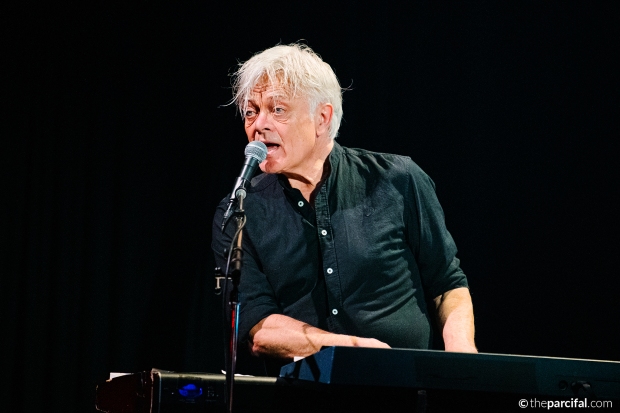 The encore starts with the well-known Radio, a minor hit at the time, in the beginning a lullaby but this gradually changes. This is mainly due to audience participation, whereby the high notes come from the ubiquitous ladies and the low notes from the gents, still present in abundance; a real Hague (senior) pop choir. No Tree Will Grow (On Too High a Mountain) means a beautiful and especially atmospheric end to the gig in the Hague pop temple. But not before the trio squeezes out another reprise of Naked. Dona Nobis Pacem, ‘Give Us Peace’, how appropriate at this turbulent moment in time.

Stips already mentioned it in his introduction, this is possibly the most compressed line-up of the band ever. With Rinus Gerritsen (a lifelong Golden Earring member) and drummer Léon Klaasse (Sweet d’Buster, Powerplay, The Analogues) there is a an impressive chunk of experience present on stage, to say the least. Keyboards and drums are placed opposite each other, on either side of the stage, Gerritsen is in the centre. There’s a strong sense of unity, the mutual fun is great, as is the focus. 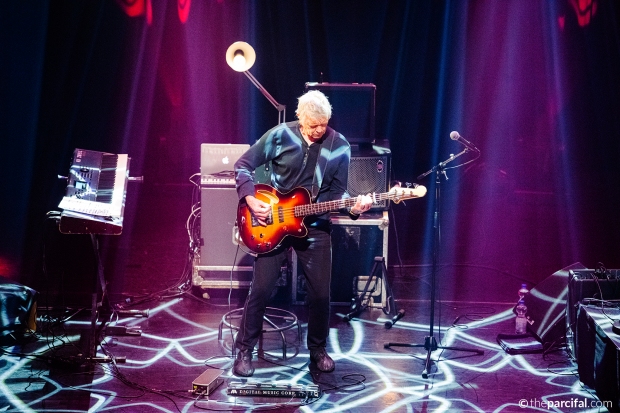 Rinus Gerritsen, seated on a stool, shows with solid playing what a great bassist he is. He has long since recovered from his comment about the ‘difficult notes’ in the aforementioned TV documentary, although he was a little late in adjusting the capo (neck clamp) on his bass guitar. Léon Klaasse is not only a top-notch drummer, he appears to have a reasonably good singing voice, regularly taking care of background vocals.

Native The Hague resident Robert Jan Stips has a pleasant personality. With his cherub face and boyish charm, he never seems to grow old. As an accomplished ringmaster he takes care of all introductions, lavishly sprinkling anecdotes, absorbed with great pleasure by the devout audience. His keyboard playing and vocals are unparalleled. The set is plagued by a multitude of technical errors, late switches and non-functioning pre-sets, especially the keyboard instruments suffering, but it didn’t spoil the fun.

Under the moniker Sweet OK Supersister, the band was originally founded in 1967, some 55 years ago. This long history is also incorporated in the choice of set list, mainly dominated by material from the early 1970s. That works for me, the music sounding a bit heavier due to the trio approach. 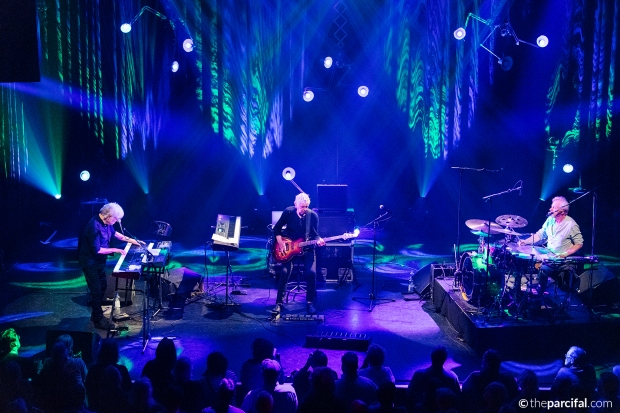 Paard (Horse) is an excellent backdrop for a show by the band, the lighting and sound are brilliant – kudos. The venue is not completely sold out, but it’s pretty crowded. The average age tends to be 70 rather than 60, just like the musicians on stage. The atmosphere is relaxed, there is an amazing number of ladies present this evening; the beautiful weather will undoubtedly have contributed. All of this makes for a small party in the Hague after an excellent performance by the veterans. There’s yet a long and relaxed night ahead in the governmental and King’s residential town.

There is also excellent news for true fans: a concert with local symphony orchestra the Residentie Orkest is announced, the unusual combination due to perform the legendary Pudding & Gisteren album in its entirety. My advice is to go and see this show, it will definitely be worth your while.

SETLIST
Intro (tape)
Judy Goes on Holiday
Memories Are New
11/8
Babylon
Dreaming Wheelwhile
Memories Are New (reprise)
Corporation Combo Boys
Mexico
She Was Naked
Psychopath
A Girl Named You
Seven Ways to Die
French Key to Britain
Sweet Dakota
Hope to See You There Again
Max Eco
Energy (Out of Future)
Higher
I Am You Are Me / Transmitter
Wow (The Intelligent Song)
~ Encore:
Radio
No Tree Will Grow (On Too High a Mountain)
She Was Naked (reprise)

[Live photos by Parcifal Werkman (Poppodium Paard), used with many thanks.]