No Sleep ’til Islington

So these Fins have been making fairly regular incursions into our fair isles since around 2011. In past raids, they have tended to limit their marauding to the main centres, primarily London, but on the current trek are being bold enough to take in eight UK cities, plus two in the Republic of Ireland. You have to applaud such efforts to take live music around the country. Insomnium are a big noise in Finland for sure, and have a good and growing following around Europe and the UK, but this counts as a major undertaking, and potentially risky.

You might wonder what a melodic death metal band is doing in these pages. Well I’m not going to get into a debate over how ’prog’ they are, but I find them intriguing, so I’m determined to find out more, and to that end, I find myself at Islington Assembly Hall on a cold January Sunday night. Many of us were raised on heavy metal in our formative years, and I’m not about to turn my back on my heritage completely.

After some strange music over the PA as we await the conquering heroes from Karelia, none stranger than the theme to Poirot, the lights finally go down and there is a brief but ominous pause before the band launch themselves into Valediction from the current Heart Like a Grave album. Opening salvos crush the crowd as expected, almost visible waves of energy spewing across the hall, but very soon the accessibility of the latest opus starts to become apparent, with the harsh vocals of bassist Niilo Sevänen counterbalanced nicely by new recruit, guitarist Jani Liimatainen’s clean vocal delivery. Both guitarists provide dextrous lead runs providing much of the melody, and already we are beyond standard death metal territory into much more interesting realms. 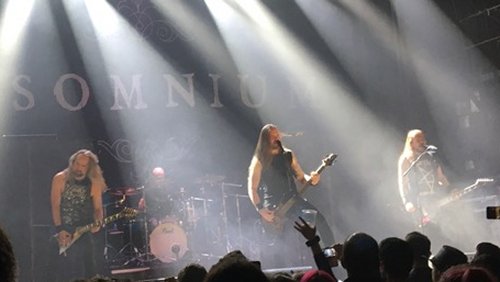 The older songs are perhaps a tad more brutal, but clearly loved by the fans who have been with them years, Through the Shadows and Into the Woods continuing the controlled aggression, yet even these songs show a sense of light and shade rather than continual chest-beating bombast. Back to the newer material, and the wonderful Pale Morning Star displays everything good about Insomnium. Beginning with a quiet guitar intro not a million miles away from Sabbath’s Spiral Architect, it evolves over nine minutes, or mutates perhaps, and holds the attention throughout. Jani and Markus Vanhala trade guitar lines with aplomb, their clean and clear lead playing weaving around the melody and bringing the song to life vividly as they dash from one side of the stage to the other, never standing still for long and visibly relishing their moment on stage. They bring to mind the early days of Maiden with Dave Murray and Adrian Smith in their approach, albeit imbued with that special Finnish melancholy which characterises many of their songs.

Several more new songs are aired, Niilo centre stage in command of proceedings, ensuring that clapping, air-punching and what have you are carried out correctly, and with more gusto than Birmingham two nights ago! It’s fairly standard concert rabble-rousing I suppose, but it’s lapped up, and everyone appears to be having the time of their lives. The show might not be a complete sell out, but the Assembly Hall seems full, and it’s alive with happy faces, and you can’t say fairer than that. 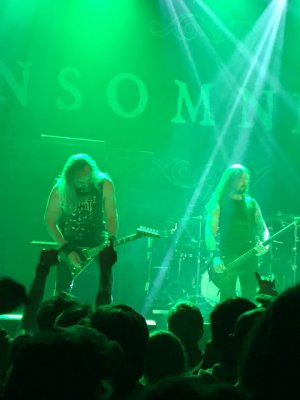 An important part of the energy on stage comes from drummer Markus Hirvonen. He is a powerhouse, and provides just the right equilibrium between power and dexterity. There’s no unnecessary flamboyance or show-boating, just rock-solid reliability. His understanding with Niilo on bass is noticeable and has been forged over the last twenty years. You can’t draft in that kind of empathy. They rock like giants, an unstoppable force of nature, yet with the power of restraint when called for.

The band close the set with a couple of older songs, Ephemeral from their Shadows of the Dying Sun album, and the epic grandeur of In the Groves of Death from 2006’s Above the Weeping World. This older material has no clean vocal counterweight, and anyone who can’t hack the harsh vocal approach would be advised to steer clear, but I have to say that it is delivered with such passion and intensity it would seem wrong any other way. Again, the lead guitarists provide much of the melodic dimension and drama, something missing from so many metal bands, but found in abundance in Insomnium. As the last ominous chord echoes away, the stage is swathed in smoke, and the band have gone. It’s a brilliant end to the show, and the stunned crowd are quiet for a moment before realising it’s time to make a noise and get them back on stage.

The encore is deserved for once, not just expected, and closes with the superb title track from Heart Like a Grave. It is almost a sing-along, and one of the most accessible songs on a very listenable record. And so we disperse into the cold Islington night, having survived this latest Viking skirmish, but only just. So were they prog? I told you I wasn’t going to be drawn into that question, but the open-minded music fan who has ever enjoyed metal would do well to give them a listen. You might just be surprised. 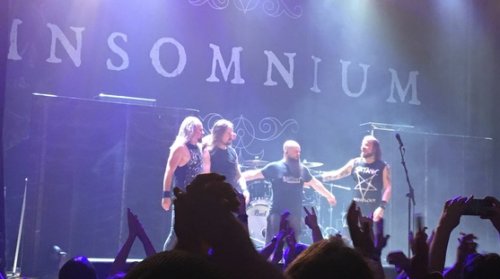 SETLIST
Valediction
Through the Shadows
Into the Woods
Neverlast
Pale Morning Star
Change of Heart
And Bells They Toll
Mute Is My Sorrow
Ephemeral
In the Groves of Death
~ Encore:
The Primeval Dark
While We Sleep
Heart Like a Grave