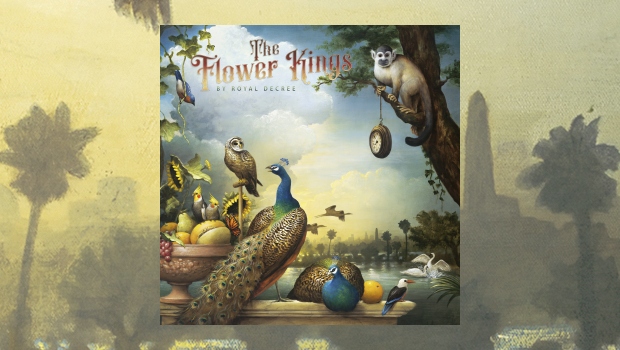 The Flower Kings – By Royal Decree

Roine Stolt is obviously one of those prog musicians who doesn’t need to sleep, because he’s been at it again and, despite having made huge contributions to the recent Transatlantic album, has nevertheless found time to compose enough material for two discs of new Flower Kings songs. The previous two TFK albums were similarly doubles, the last one, Islands, as recently as 2020, so he’s not exactly short of ideas. Cynics might well suggest that judicious pruning would produce more focussed single albums, and that may be true, but to be honest, the standard is high throughout. Whether or not you relish the prospect of over an hour-and-a-half of new TFK music really depends on how much you like them already. Believers will be very happy, unless they insist that the lack of ‘epics’ is a problem, and there are a few who think like that! In my view, this is a collection of new music, with recurring themes and a cohesion which makes a nonsense of how this music is divided up for consumption. It is made to be heard as a complete cycle, and as such it works perfectly well.

Of much more interest is the return of a couple of contributors from past line-ups. Roine’s brother Michael returns after a break of goodness knows how long on bass. I guess the fact that regular bass man Jonas Reingold is so in demand, especially touring with Steve Hackett, means that the band needed a bass man more regularly available. Jonas still appears on the album, but Michael will be the guy on tour, and he is more than capable. Also appearing is master percussionist Hasse Bruniusson, another name from the past, and it’s nice to hear his contributions once more.

The album opens without preamble, the new sleek Flower Kings simply getting on with the song without the need for lengthy introductions, overtures or scene-setting. It’s immediately unmistakably Stolt and his happy band, Hasse Fröberg in fine voice, and Roine and keyboardist Zach Kamins playing off each other succinctly but with flair. The mood is uplifting and positive, exactly as we might expect. Kamins’ keyboards give a modern twist to the traditional TFK style without ditching all retro shading, and latest drummer Mirkko Demaio is crisp and stylish. It’s Jonas on bass on this track, and he never puts a foot wrong, playing with authority and feeling. Michael is no slouch either though, and on the following song, World Gone Crazy, he shines on bass and bass pedals, providing gravitas to what is actually quite a funk-driven prog fest. Nobody could argue with the song’s sentiments either.

“So hard to believe – but you better just face it
The wagon’s off the rails – and the world is going crazy.”

This segues nicely into Blinded, a very typical Flower Kings song with some wonderfully tasty guitar licks, and very welcome sax from Rob Townsend. I’d have liked to have heard him used on more of the album as he brings a lovely jazzy flavour which works so well here, and seems to push Stolt to greater heights on guitar. Roine takes lead vocals on the next standout track, A Million Stars, a beautiful star-spangled voyage through time and space. I’m sure he could write this kind of thing in his sleep, except of course he doesn’t sleep, as I’ve mentioned earlier! The quality of songs like this just shine through though, so although it’s not full of surprises, it’ll win you over for sure. Revolution closes the first disc, a classy piece of typical Flower Kings magnificence. It could have been lifted from any of their classic albums of the past, and nobody does this better. There is a slight return to the A Million Stars chorus in the final segment of this piece, providing a sense of conceptual continuity.

Walking us through every song would be a pointless exercise, as I’m sure you know by now whether you’re going to like this album. Highlights worth mentioning though include the quirky Beatles interlude We Can Make It Work, with its childlike simplicity, the (almost) instrumental Peacock on Parade, on which Mirkko Demaio pays tribute to Neil Peart with some superb drums and percussion, and the unusual Silent Ways, with its baroque feel and Bach inspired structure. Time the Great Healer, which opens the second disc, is classic TFK, and Moth is very orchestral with massed keys and choirs of angels giving a cinematic feel. Funeral Pyres closes the album in superb style, and proves that prog can be epic without the song having to be ten minutes plus!

So there it is, no major departures or shocks, but The Flower Kings have released yet another slice of Scandinavian prog excellence, and when they do what they do so well, why be radical? Now we can look forward to seeing them perform live, as they are returning to gigs this year, and I for one will definitely be catching up with them.

The Flower Kings – Waiting for Miracles →