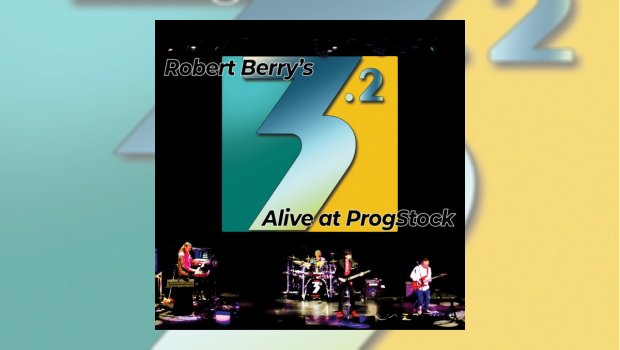 Robert Berry has always been a quality performer who should be much more well known than he is, despite the high-profile collaborations he has been involved in since the mid-’80s when he was recruited by Keith Emerson and Carl Palmer as the ‘Lake’ element of their reconstituted ELP project, 3. The resulting album, 1988’s To the Power of Three, had its moments, but despite a successful US tour and Top 10 hit in Talkin’ Bout, the band soon broke up. Robert subsequently worked with then ex-Yes guitarist Steve Howe on an aborted second GTR album.

This show acts as a compelling career overview for Berry, a crack band assisting him to deliver a highly entertaining show, into which Berry drops anecdotes about the songs and his time in ‘The Biz’. Robert is a very classy vocalist – as always – and an impressive bass player, here supported by Jimmy Keegan from Spock’s Beard on drums, Andrew Colyer of Circuline on keyboards and Paul Keller from Berry’s late ’70s band Hush, also the touring guitarist with 3. All contribute to the harmony vocals.

This set was recorded at the ProgStock Festival in New Jersey in 2019, as part of a long US tour on the back of the ‘3.2’ re-boot album that Berry wrote with Keith Emerson as a long-awaited follow-up to To the Power of Three shortly before the keyboard legend’s tragic death in 2016. Berry subsequently put the album together on his own as a memorial to Emerson’s legacy, releasing it in 2018 as The Rules Have Changed.

The ProgStock show opens with a cover of the pumping title track from Ambrosia’s third album, Life Beyond L.A. from 1978, a band that Berry was in for a period in the mid-2000s. An excellent scene setter, the band settle in straight away, with an excellent solo from Keller. This is followed by a track co-written with Steve Howe, Keller pulling off a superb Howe sound, the song finding a home on Berry’s early-’90s solo album Pilgrimage to a Point, which features again later with Last Ride into the Sun, written with Emerson and Palmer for a 3 follow-up album that never happened, and at nearly 10-minutes, the longest song in the show. In between we get another extended piece in the longest track from To the Power of Three, the multi-part Desde La Vida. Colyer gets his first chance to show his prodigious skills in recreating Keith Emerson’s elaborate style, as he does on Powerful Man from The Rules Have Changed.

Berry is a fine songwriter who delivers his melodic and dynamic compositions to perfection with one of the finest voices around. It’s particularly nice to hear these seldom heard and nearly-lost pieces delivered with such energy and precision.

He contributed to a number of the prog tribute albums released on the Magna Carta label in the ’90s, and the chosen pieces certainly add a different dimension to the set, instantly recognisable but presented in varied arrangements that often add to the originals. We get a lovely take on Jethro Tull’s Minstrel in the Gallery and a radical reworking of Yes’ Roundabout which is almost like hearing the track anew and a most welcome addition. There’s also a fine rendition of Genesis’ Watcher of the Skies with Colyer deftly switching to Tony Banks mode.

The cover of the Byrds’ Eight Miles High was a highlight of To the Power of Three, and so it is here, culminating in Colyer stretching out into a segment from Fanfare for the Common Man, the first 3 album also contributing a punchy Talkin’ Bout and a lovely solo acoustic version of You Do or You Don’t. Somebody’s Watching from 3.2 and Can’t Let Go from Berry’s solo The Dividing Line also feature before an entertaining sideswipe at traditional Christmas carols, done in the style of Rush, with accompanying variations from some familiar Rush favourites, originally released by Berry’s December People Christmas project. An incongruous addition, with the show being played in October (and now listened to in May!) but fun and very clever, delivered with aplomb by the band and sung by Keegan from behind his kit.

To tie things up to near perfection we get a storming version of ELP’s Karn Evil 9 (1st Impression, Part 1) that no doubt sent everyone home happy.

The track listing is replicated on both the CDs and the DVD, the spoken introductions within separate tracks on the CD to allow them to be programmed out to focus on the music. The multi-camera DVD is a great watch, Berry introducing each song with an easy charm, and the sound is great as you get to see the band run through the full gamut of their prodigious skills.

This really is a lovely set and it’s a pleasure to see this fine band in action, adding their own spin to the classics and delivering some lesser known pieces to underline Berry’s contribution and talents over the years. Very nice indeed.