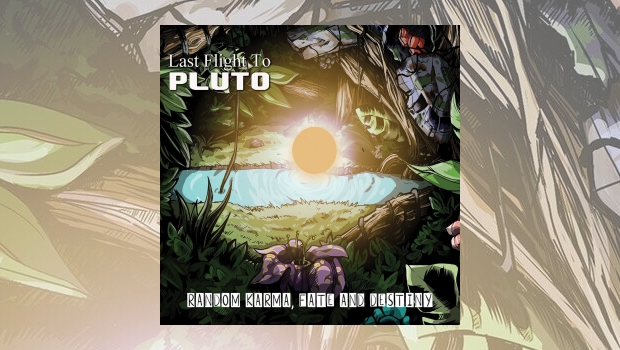 Welsh band Last Flight to Pluto, return with their third album, Random Karma, Fate and Destiny, following their impressive 2019 release A Drop in the Ocean, once again on Robert Reed’s White Knight record label. When a musician as eminent as Magenta’s Rob Reed takes an interest in a band then you can be confident there is something worth hearing – indeed White Knight are developing a growing reputation for high quality releases, and the latest from Last Flight to Pluto maintains a positive trajectory for the label, and most importantly for themselves.

A Drop in the Ocean really captured me back in 2019, particularly the highly catchy and memorable Coverland (which I had on constant repeat for quite a while), about the feeling of emptiness felt by some musicians having to just repeatedly play other musicians’ music in cover bands and tribute acts. Whilst there’s no Coverland moment for me on this album (let’s face it, such moments are relatively rare!), Random Karma, Fate and Destiny as a whole still grabs your attention and engages the listener with its energy, power and imagination. Last Flight to Pluto established a successful formula on A Drop in the Ocean for fresh, accessible mainly guitar-led rock songs with Alice Freya’s distinctive vocals, which they continue on this release. However, there is something different to their approach this time. Whilst their previous release had some more extended instrumental passages and longer songs, with only six songs ranging from seven up to nearly 10-minutes, Random Karma, Fate and Destiny has nine songs, all in the five to six-minute range, except for the longer finale song, Game Over. This latest album is definitely punchier and more direct, with even more focus on guitars, and in particular the excellent vocal style of the remarkable Freya. Those were always the best elements of A Drop in the Ocean so it definitely makes sense to thrust the guitars forward more and highlight the star vocal talent.

Alice Freya herself has explained that they have “taken a different approach again; we stripped everything back and allowed more space for me to sing, which is something that I felt really needed to happen this time round. Musically, there’s still a lot going on, but I think the songs are packing a bigger punch than anything we’ve done before, because we’ve made room for melodies and hooks whilst keeping hold of our progressive roots.”

This more direct approach is particularly evident on the high-energy straight-ahead rock of the fizzing Some of Us, featuring some great guitar work, and the heavier White Noise, which benefits from the impressive drumming of Darren Joseph – as does the whole album. Indeed, Joseph plays a major part throughout, also providing most of the piano and keyboards, and co-writing the songs with Alice Freya. Last Flight to Pluto set the tone of the whole album with the almost funky and distinctive opening song Stop Yourself from Turning into Dust, featuring a restrained keyboard passage in the middle and a fluid piano cameo by Darren Joseph’s old Ezra band mate, Rob Reed. However, it is the guitars of Jack Parry, Ryan Barnard and Son of Man’s George Jones that really drive this album on.

Rachel Edwards yet again provides the distinctive graphic novel-type artwork, reflecting the band’s contemporary style, all done with a mischievous glint in the eye. Last Flight to Pluto show a darker side on We’re Being Rewired, focusing on the insidious effects of social media. Freya’s smooth-as-chocolate voice initially pours over a furious opening before sliding through acoustic guitars in the more melodic middle section. Darren Joseph’s simple but effective lilting piano melody carries the delightful Around the Corners before the pace and volume increase and then recede back to the gentle feel of the opening – it’s an excellent song.

One of the highlights of the album is the staccato, pulsing Feed the Machine which rolls along powerfully with a particularly striking distorted guitar intro into a breakneck rock section. In contrast, the rather more lightweight Any News did not really hold my attention. The versatility of this band is shown in the rather different Stay Out of My Head, which is altogether more melancholic and reflective with an assured, restrained performance by the band, particularly Ed Rees’ well-judged and tasteful bass playing. This song ascends into a rock-oriented trajectory, with some extraordinary vocals from Freya.

The album appropriately ends with Game Over, kicked into action with Joseph’s fine rhythmic drumming under Freya’s melodic vocals, before the guitars lift the song into a very different place, verging on a heavy prog workout. This is a band who do not mind bending and blending genres. Is it a ‘Prog’ album? Of course, it bloody isn’t – it’s just very good music, and that’s totally fine.

Random Karma, Fate and Destiny is a worthy successor to the excellent A Drop in the Ocean, showing progression and development in styles, a growing confidence in their assured performance and high quality song writing. It’s certainly a flight worth taking with this band. 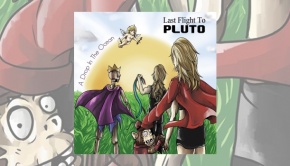 Last Flight To Pluto – A Drop In The Ocean →