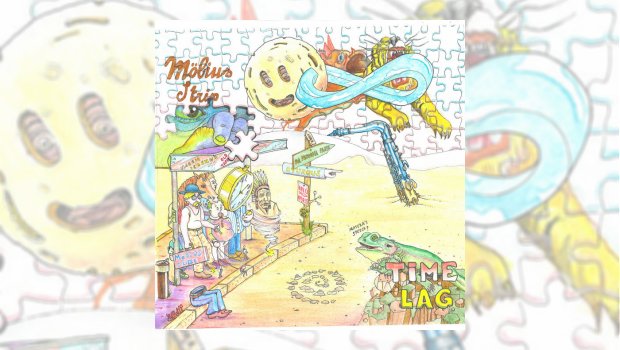 This album has taken a while to come to my attention, which is a shame as I was so impressed with the band’s self-titled debut album, released in 2017, and began to look forward to their follow-up release. So here we are with their second album, Time Lag, and the return of these young Italian progressive jazz-rock musicians from Sora and its surrounding area. I stated in my review of the debut that this is a band who show considerable maturity, and on the evidence of the songs here, that statement still rings true.

On the debut album, one of the most noticeable features was that there was no guitar, alternate lead lines being taken by keyboards and saxophone, supported by the excellent rhythm section. With this second release they have dipped their toes into that particular pond, by inviting guest musicians to supply guitar support, to very fine effect, helping to produce another collection of carefully crafted songs with excellent arrangement and presentation. This venture has further been extended by the addition of some brass on three of the tracks, and vocals on one.

The album consists of six tracks ranging between six-and-a-half to ten-minutes in length, with the whole album clocking in at forty nine minutes. Recorded, mixed and mastered by Fabrizio Migliorelli at M Studio Centre, the striking album art comes from Francesco Tersigni.

With this release they have taken all of what made their first album so memorable and enhanced it, with the brass additions mentioned earlier giving a wider dimension and texture, carefully placed and used to give a fuller sound. This is also true for the guitar used on two tracks, indeed, Simone Marcelli provides us with a great prominent guitar solo towards the end of Möbius Cube.

The opening track, Chand Baori, gives us a smooth jazz-like start with a solid rhythm supported by piano and saxophone, leading to a slow, laid-back beginning which gradually picks up the pace and interest. This interchange between the players is a dominant feature on all the tracks, clearly demonstrated on Matena’s Speech. Here things get off to a start with a great bass groove, saxophone playing over the top. The drums and piano join in seamlessly to provide a song which is almost playful and joyful in its presentation.

The band’s previous album and the bulk of this release has been fully instrumental, to great effect, but here for the closing track, A Theme for the End, they have decided to venture into using vocals. The lead vocal has been taken up by keyboardist Lorenzo Cellupica with supporting vocals from three guests, Caterina, Debora and Andrea, to provide something new for the band, and in an excellent way. The vocals sit well with their music in what, maybe, could be a signal of future musical ventures to be explored on their next album.

Möbius strip have once again released an album of great maturity, showing their ability to evolve and refine the sound created on their debut with another collection of well written songs which have been carefully arranged and presented. This album demonstrates the upward trajectory that they appear to be on – bring on the next release.