A strange venue for a prog gig: strange for me on so many levels. As a church you would expect the acoustics to be good, and they weren’t bad at all. It struggled a little with the amplified sound, but practice makes perfect and, no offence intended, seeking some guidance from local sound engineers, such as Exeter’s Sound Galley, may pay future dividends. It is potentially brilliant, but for now it is a beautiful venue.

First up were The Emerald Dawn, 70 minutes-ish of heaven with their style of symphonic progressive rock. Ally Carter’s guitar does owe something to Pink Floyd, but it’s his performance and with the pleasure it brings, the comparison is forgotten. Added to that some excellent sax playing, and you soon realise how beautifully balanced the players are that combine as The Emerald Dawn.

Tree Stewart, Queen of the Roland’s, plays the first notes, rising up above the pulpit where I once read one of the lessons on St. Georges Day – today’s date, such is synchronicity. Rising, soaring, and touching the sky, or in this case the vaulted ceiling. The Awakening, and Tom Jackson’s drums, then David Greenaway’s bass, and finally Ally Carter’s guitar. An atmospheric beginning to a fine performance; despite small issues with his monitors, Ally’s instinctive playing is wonderful. 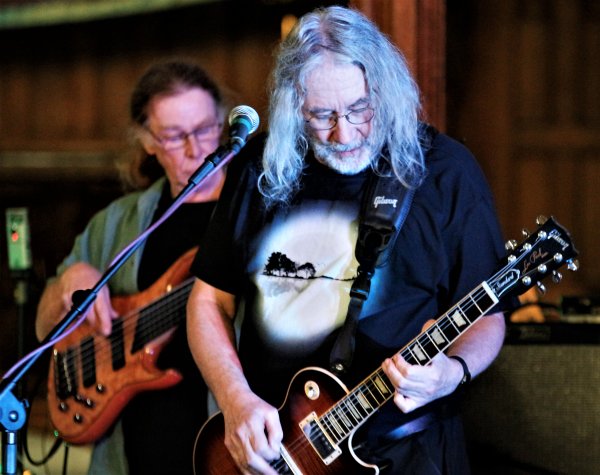 Moving on, they take a risk with Beyond the Wall. I close my eyes, engage my ears, and avoid falling asleep. The music of this band has always had a spiritual quality, far beyond any religious confines, and in this venue, if confirmation was required, it is found. This was one of the first tunes that the band wrote, and it here gets a rare outing. 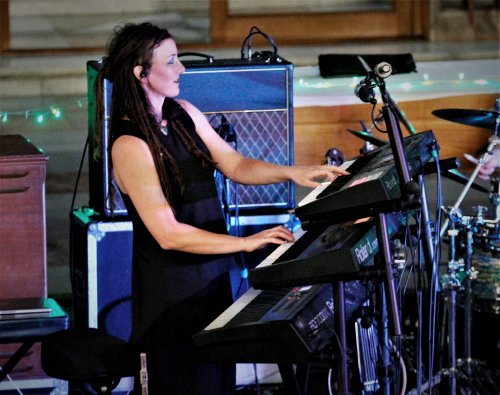 Stranger in a Strange Land may or may not be a reference to Robert Heinlein’s novel, but the other world qualities it exhibits fit the bill. It matters not upon which instrument you focus, each gives its all: Tom’s drums have power on call, a subtlety by request, the close relationship to David’s bass never waivers. 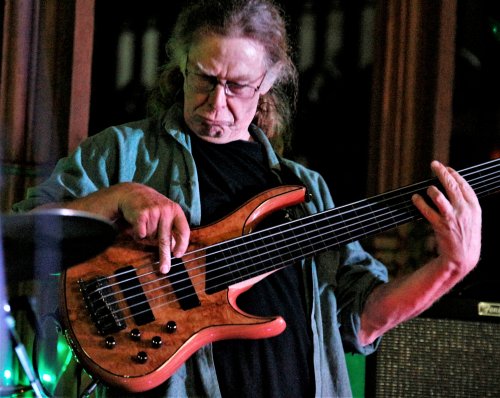 Next, we have a break of sorts as Tree Stewart demonstrates one of her other talents, as a performance artist. Here she offers some contact juggling, balancing and controlling glass spheres, one, two, three, four. It is mesmerising, seemingly effortless, but the concentration the lady exhibits deny the appearance of simplicity. It is an enhancement that works well within the set. On this occasion it has taken the place in the van of Tree’s twelve-string acoustic; to paraphrase Spielberg, they’re going to need a bigger van… 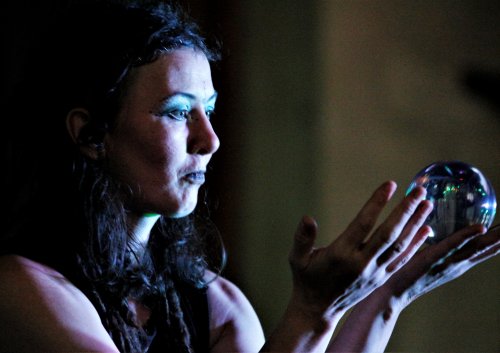 No sign of the missing child this evening, but there is Shadow in Light. Tree’s voice fits well to the venue, it soars and floats, filling the room. The church must think that heaven has arrived. Just one more track, The Ascent, from fourth (and latest) album To Touch the Sky, an aspiration that the many hours of rehearsal have achieved this evening. This is a tune that paints a rainbow, a spectrum of styles and moods, and a favourite from their repertoire for me. I will play it again on the Green Vinyl edition that is awaiting my attention at home. Seventy minutes have passed far too quickly. 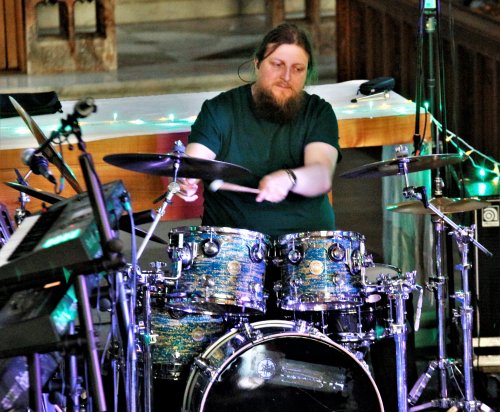 The interlude: our hosts and promoters, World Unlimited, have provided refreshments and cake, all at reasonable cost – a rarity in a venue. Give them your support for future gigs and the rewards will increase exponentially.

Part two, or should that be ‘Zwei’, as Blank Manuskript take the stage. Other than the two albums I listened to in the early hours on Thursday, they are completely new to me. Symphonic Art Rock that encompasses just about everything from the sixties and seventies you may have heard of; King Crimson, The Nice, ELP, Van der Graaf Generator, Genesis, Led Zeppelin, and more, but again, it was referential rather than copied. Unique is a word not to be bandied about without consideration, but here it is fitting. The sartorial style adds to the performance: from long orange coated keyboardist (that pays homage to the caped Rick Wakeman) to some amazing trousers (that my son will be asking where he can buy them, once he sees the pictures), music and presence are stunning as they given us a selection from there five album discography. 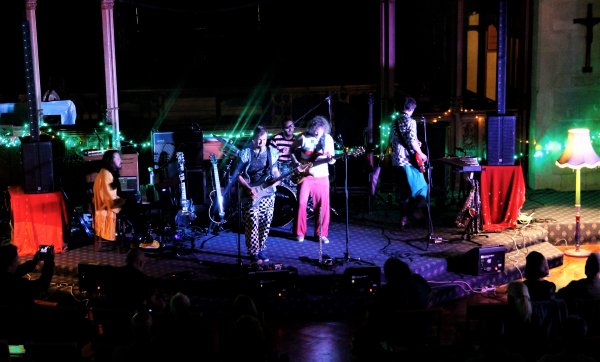 Before they start there is a slight change in their domestic arrangements: all sing, but the norm is for mountain region inhabitant Dominik Wallner to take the lead. Having taken the waters – or something – at the gig the previous night, his voice disappeared during the performance. Not an uncommon occurrence when in a chalk area like Oxford. Bravely the band have divided the vocals amongst the band. It works, and only because I have been told am I any the wiser. The drumming is solid and accomplished: provided by Jakob Sigl, possibly the most introverted of the band as he provides that base for everything else. Alfons Wohlmuth gives us the bass – both guitar bass and electric double bass, an instrument I wish was used by more bands. 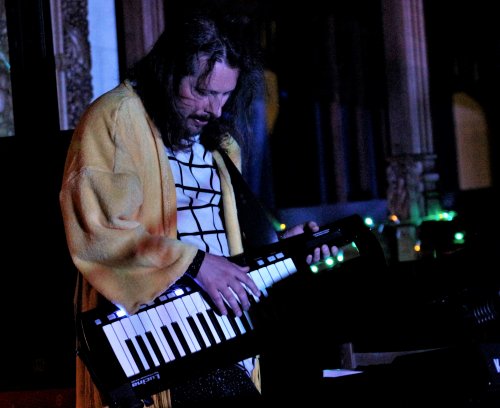 This five piece performs with aplomb, lots of recognisable tropes and large elements that are original and unpredictable, it makes for an amazing set. Jakob Aisleitner brings sax, flute and, I think, Glockenspiel to the ensemble, a popular Austrian instrument, but does leave me wondering for the absence of a flugelhorn. There I go, stereotyping again! The main guitar, I think, is Peter Baxrainer, who delivers a range of styles, none without accomplishment. So even if we are one light, or I just cannot count, Blank Manuskript have surprised and delighted me. 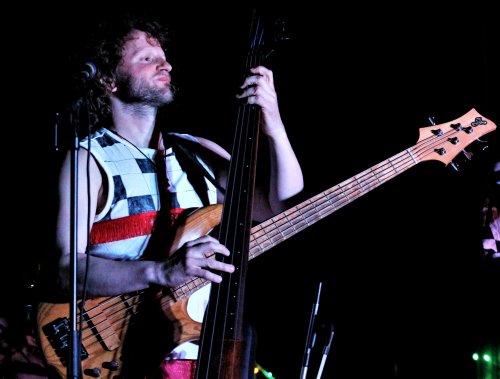 My responses ranged from stunned to amazed; some of the material is best described as avant garde, but once you zone in, it is all entertaining and quite different from The Emerald Dawn. I have listened once to two albums and really enjoyed them, but live the material becomes much more dynamic, creating an amazing soundscape. The set as listed will be close to the forthcoming live album, recorded in Salzburg in March, that they expect to release shortly. Having borne witness, this which will definitely be one I shall look out. 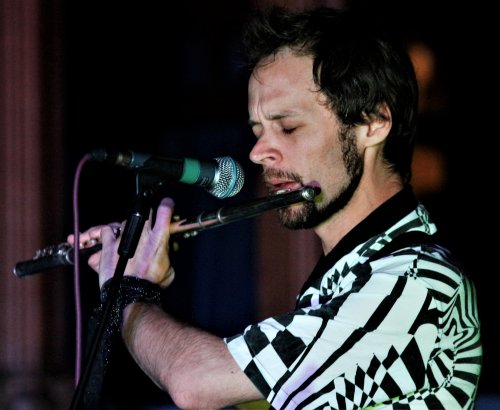 Part of the performance is taken from Himmelsfaht, their latest album, and it demonstrate a band that are continuing to progress. I am told that in translation ‘Himmelsfaht’ also means the ascension, synchronicity, coincidence, or a cunning plan? The three songs Twilight Peak, Dance of the Devils and Celestial Spheres form a triumvirate that goes a little way into explaining the performance. If you’ve read Dante, you’ll know what I mean; as well as structure, the Divine Comedy recognises the contribution of chaos. I don’t know but all those aforementioned influences seem to come to bear, all wrapped up in a unique Blank Manuskript package. 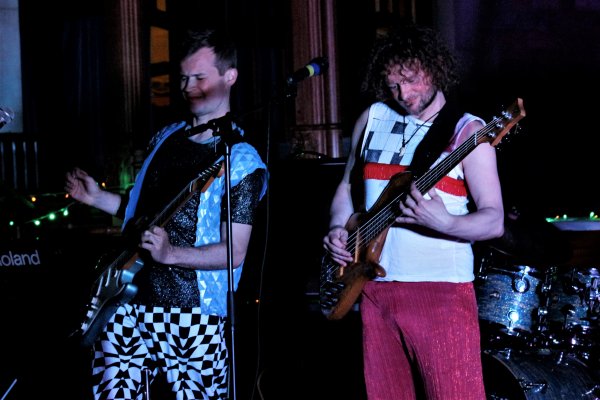 The energy they create on stage is amazing, channel and store it and you will have enough power for a small town. Instruments chop and change, the rumours of amazing stage wear are entirely true, and the adjusted material delivers both a richness and surprises over a course of 80 minutes. This is an incredibly talented and not entirely what you would expect band, and I really hope I get the opportunity to see them again. 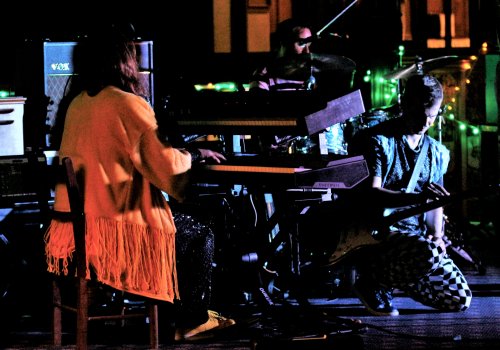 [Future performances for Blank Manuskript will be at Night of the Prog (GER), Woodstock Forever (GER) and Minnuendo (Spain), so if you are on your travels in Europe…]

[Photos by Progpics by Stan S (Stan Siarkiewicz), used with many thanks.]