Gigs are back in all their former glory! Well, not quite…

With the lifting of all Covid-19 restrictions in England on 19th July 2021, attending a gig at The 1865 in Southampton on 18th July seemed like a cruel twist of fate. Of course, the virus is still with us, and we must all continue to take the greatest of personal care as well as looking after the health interests of others.

All this might have taken the gloss off The Emerald Dawn’s first live show in 16 months. Ohhhh no, this gig was a blinder and the sheer joy shown on the faces of the band was evidence enough that they were pleased to be back on stage. But before the main event, the audience was treated to an hour of Spitdust, a band very local to Southampton.

Described as a collective of musicians performing experimental atmospheric English folk and cinematic soundscapes, this outing for the band was a stripped-down version, but nonetheless it was a very compelling performance. I have been to hundreds of gigs over the years, many by big household names in huge venues; I’ve always paid pretty good attention to the support acts – or at least most of them – and I’m delighted to say that I now rate Spitdust highly, amongst the best support acts I have witnessed in decades, and very well matched to The Emerald Dawn. With what appears to be five albums to their name, they drew upon their back catalogue and received a very positive response from the audience. Good show, guys, and to the rest of you, they are well worth exploring. 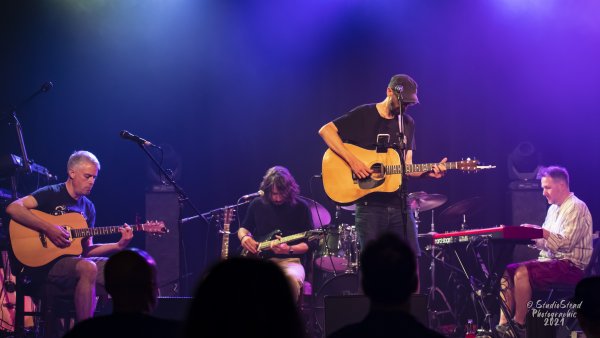 And the night forged on to The Emerald Dawn… 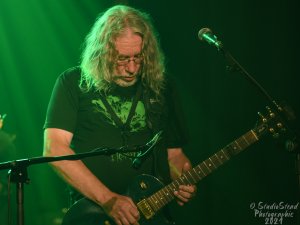 I had the great pleasure of being invited to turn up early to witness the in-load, set up and soundcheck, after what had been an exceptionally early start to the band’s day, travelling from their base in the far West of Cornwall. It was all very slick, with great attention to detail to ensure audience sound and band in-ear monitors were tweaked accordingly, and the band had a great synergy between them. The gig opened with Alan (Ally) Carter (guitars, keyboards & saxophone) narrating the prologue to And Darkness Falls from their 2019 Nocturne album. It was a classic opener and set the scene beautifully. They moved seamlessly on to what is one of my favourites from their repertoire, And I Stood Transfixed from most recent album To Touch the Sky. This album seems to be giving the band real traction in the progressive community, getting blisteringly hot reviews from the well-known review sites and one can expect to see it featuring in ‘Best of’ polls for 2021. …Transfixed has the band’s signature notes all over it; with a cinematic acoustic guitar opening scene from Tree Stewart (keyboards, acoustic guitar, flute & vocals), lead guitar from Ally before he breaks into modern jazz saxophone and the tight rhythm section of Dave Greenaway (bass) and Tom Jackson (drums & percussion), the track oozes a laid back symphonic ambience with sublime vocals and flute before a big wake-up call that has elements of King Crimson. It seems to be getting the most airplay on progressive rock radio stations and, given that the band wanted to play a selection from their back catalogue rather than showcasing the whole of the recent album, it was a great choice, but I can only hope that more from this album gets an airing in the future. 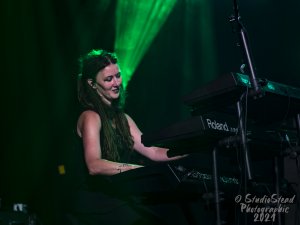 The first set closed with In the Dead of the Night from Nocturne. Tree Stewart explained that reviewers had critically described this a somewhat comedy horror track, before (wait for it…) wistfully agreeing that it was a good description. Indeed it is, and it performs extremely well live, with Gothic synthesisers, a compelling bass line from Dave and sax overtones from Ally almost comparative of The Specials – whatever next?! Glorious guitar and keyboard solos, that’s what… It certainly left the audience hungry for the second set.

Set Two opens with Shadow in Light from debut album Searching for the Lost Key. It’s another cinematic treat, perhaps more so than tracks from later albums, rotating through various themes to illustrate the contrast of those key words, shadow and light. Beautiful smiles exchanging between Ally and Tree as they each take their lead roles throughout the song; its hugely endearing and uplifting. Stranger in a Strange Land, the only track this evening from 2017’s strong Visions follows. As Ally described the song as being in four parts, I got hugely excited that Musique Noire was going to get an airing, but at 20-minutes long, there is a limit to what can be achieved in a 2-hour period and how many long songs make the cut (next time, perhaps?). But, Stranger… continues to showcase the great skill that this band has. It is true that Ally and Tree very much take the lead on melody and harmony, but one cannot forget the back line of David and Tom, without whom this band would not excel. 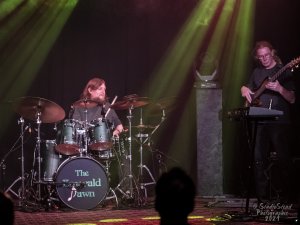 The final track of the evening is The Child Within, the epic 20-minute closer from Nocturne. It has a depth that is reminiscent of some Porcupine Tree songs, but with a uniqueness that can only be The Emerald Dawn. Lots of themes abound without being too conceptual, and with a fine balance of vocals with instrumentals.

There were no encores. I strongly suspect that because the gig was still constrained by social distancing and audience numbers, the rapturous applause was simply not enough to bring them back on stage. There is no doubt at all that a larger crowd will demand the traditional return to the stage and the band richly deserved the opportunity. It’s obvious that the band very much enjoy the music they make, and what they have achieved in a tight 100 minute set is a well-rounded gallop through their history. And the audience loved it. So much so, that there was a long queue at the merchandise stall to secure CDs and T-shirts – some went home with the entire back catalogue under their arms, such was the impression that had been made this evening. There were some audience members who did not know the band, but they do now, and their enthusiasm was electric. The band’s trajectory is steeply upwards, and rightly so.

Do not miss this show. Their next outing is at Prog For Peart in Abingdon, Oxfordshire on 14th August, and a well earned slot at the A New Day Festival in Faversham, Kent on 20th August before a short but perfectly formed tour in September.

My highlights of the night? Stranger in a Strange Land and And I Stood Transfixed; we certainly were… 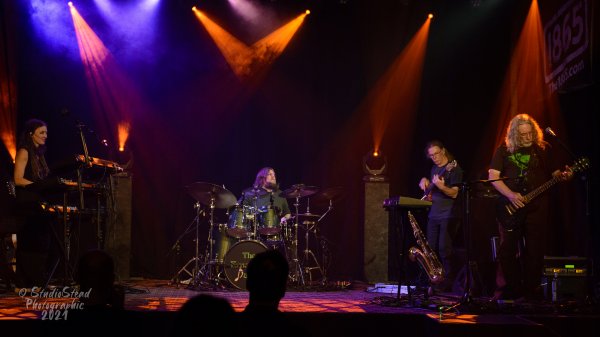 [With thanks to Graham Stead of StudioStead Photographic for his images.]