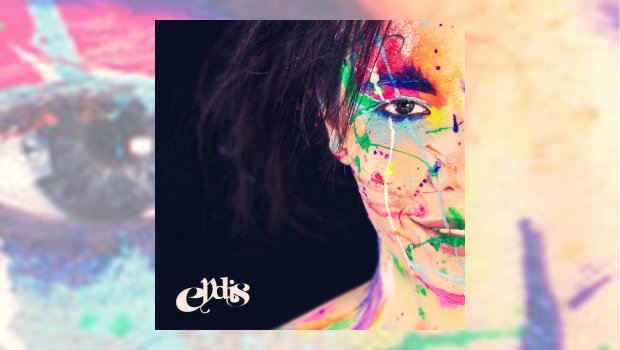 “Once upon a time, there was a young lady named Katy Cocks. Katy was a classically trained singer, and I’m sure you know what that means. Katy might put on a big dress, and sing standing next to a man playing the piano; or pretend to be a girl named Maria, and climb ev’ry mountain. It was all jolly good fun, and Katy was very good at it. But Katy was always singing the songs of other people, and wondered what it would be like to sing songs of her own.
“One day, a big, bad virus came down upon the world, and all the people had to hide in their homes. Katy wasn’t able to sing songs to other people anymore, and had time to write her own. It was a bit scary, but very exciting. Katy wrote, and wrote, and wrote.
“After a lot of writing, Katy plucked up the courage to speak to a friend about the songs she was writing, bestowing upon herself the name ‘Eydis’ – the Norse goddess of good luck. Katy’s friend was called Steve MacLachlan, and he was a multi-instrumentalist and music producer who had his own studio. What a very handy friend to have!
“Steve liked Katy’s idea, and became her writing partner in Eydis. Katy provided the lyrics and melodies, and some basic chord progressions, and Steve would write and arrange the music. Before long, Katy was not just singing her own songs, but sharing them with the world…”

Ok, I’ll admit I don’t have what it takes to write a good story – but Katy definitely has what it takes to write a good song. The first song of the eponymous debut from Eydis, Wonderland, was released almost half a year ahead of the album. It’s a wonderful song, and could perhaps invite comparisons to Kate Bush. But that would be unfair, and allusions might be a better word – particularly when literary allusions form the basis of much of both these artists’ fine works. One of my friends, upon hearing Eydis, said it reminded him a little of Björk. I could possibly add in Annie Lennox (who imbues a similar classical tone to her pop music). Without hearing a note, these comparisons, or allusions, probably give some indication of the eclecticism and beauty that you’ll hear from Eydis. And also that this is progressive pop and not rock, so if pop is not your thing, you may wish to step off now.

Wonderland begins with an enchanting and bouncy melody that Katy’s voice floats over. It’s whimsical and wonderful, and full of fairy tale imagery. Well, perhaps not literally so, but it’s easy to picture an enchanted landscape with speaking animals, and Katy caught unaware amidst it all. Her voice is incredibly expressive and characterful, and beautifully clear. There are some really interesting twists and turns in this tale, as one might expect when tumbling down a rabbit hole. There are a couple of short passages that seem to be deliberately unexpected, as if to heighten the feeling of disorientation that the protagonist of the song is feeling. Even though I now know they’re coming, the changes within the smile still bring a smile to my face. Wonderland is a great introduction to the music and lyricism of Eydis, but there’s even greater delights further down the rabbit hole.

The second song, and second single, Love Drunk Romeo, has a smoky jazzy feel and groove that is delicious and irresistible, and adds some scalding guitar towards the end. But it’s Katy’s sultry vocals, the three-piece brass section, and that lush double bass that really seal the deal for me. And if the guitar was scalding on Love Drunk Romeo, it’s absolutely scorching on Join the Valkyrie. It’s delicate beginning belies the power and punch of the song, which indeed rises up – and takes the listener with it. It is soaring and magnificent. Three songs in, all very different, yet all fitting together perfectly. The varied sounds and styles are an absolute treat, and more-so because of how well they follow each other, despite their differences.

The Illusionist is beautiful in its sparse and minimal arrangements, coming as a quite wonderful contrast after the glorious grandeur of Valkyrie. It’s a quieter number that is possibly closest to the more classical sound Katy usually sings, but overlaid with an electronic trip hop vibe that enhances the piece terrifically. Like Love Drunk Romeo, this is another song that I absolutely adore. It has a feeling of ‘beauty and the beast’ about it, with the piano inviting, and the electronica menacing. I love the final haunting seconds, as swathes of electronic noise crescendo. All sense of threat dissipates immediately with the opening notes of Follow Michael which is, like Wonderland, a nice track that I thoroughly enjoy, but doesn’t seem to rise to quite the same heights as the three songs sandwiched between them.

That leaves Goodbye, which is all you would and could expect from the final song of a release having this title. I initially wasn’t sure how much I liked this song. Not because it’s not good, but because it’s the most generic (for lack of a better word). Everything else has little idiosyncrasies that make for quite a unique and original listening experience. This just seemed less “original”. It has definitely grown on me, and the emotion in Katy’s singing seems very genuine, but I fear it is probably my least favourite song still. However, given the overall high quality of the album, that’s certainly not a negative reflection, and I imagine a lot of people will love this song. The album doesn’t quite end here, though, as instrumental versions of each of the songs follow.

I have to admit that I was – and remain – really surprised just how much I enjoy the instrumental versions of the songs. Given that Katy’s voice is obviously the focus of Eydis, I thought it would be an integral part of the songs. Which is not to say I thought the instrumentals would be no good, so much as I wasn’t sure how interesting (again, for lack of a better word) they would be compared to the vocal versions, and whether they’d have much replay value. But not only are the instrumental versions absolutely fantastic, but (shock, horror, and sorry Katy) I played them more than the vocal versions. Eek! That feels like a horrible thing to say. Truth be told, I don’t really have a preference for instrumental or vocal versions: both are beautiful. The album is a stunning debut from someone who has come from a completely different background, and I can’t wait to hear what Katy comes up with next!