On Saturday 23rd April, Kayak visited De Boerderij in Zoetermeer, Holland, for the last time. The current tour means a farewell to European venues for the band: the title ‘Kayak Farewell Tour 2022’ says it all.

The show is part of a tour through the Netherlands and a number of European countries such as Germany, Belgium, Denmark, Sweden and Norway. Unfortunately both of the planned shows in the United Kingdom have been cancelled. It’s the last time that the band, which was founded almost fifty years ago, will go on tour. Keyboardist/band leader Ton Scherpenzeel explains: “It’s been a great ride but we’ve come to the end of the line. As the other band members would have liked to continue, the decision was extra difficult. And as a musician I still do enjoy playing itself. But it takes a lot more than just that to make a good tour, and circumstances for bands like us are not getting any easier. In that respect I feel I’ve reached the limit of my capabilities. And however sad it may be, I’d rather stop too early than go on too long.”

Highly laudable, quitting at the height of your career, but a bit of a shame, judging by the band’s performance tonight.

Dutch band Lesoir act as support tonight. They were faced with a difficult task; their music is to a certain extent an acquired taste. The audience wasn’t immediately sold, but the quintet eventually succeeded in winning over (part of) the crowd. Singer Maartje Meessen sounds great live and she also plays the flute and keyboards. Some of the fans were hoping for an integral rendition of Babel, Lesoir’s latest studio attempt, but they only played a small but strong section of this modern epic. Pink Floyd influences and the strong guitar playing of Ingo Dasssen ensured recognition and a well-deserved round of applause. 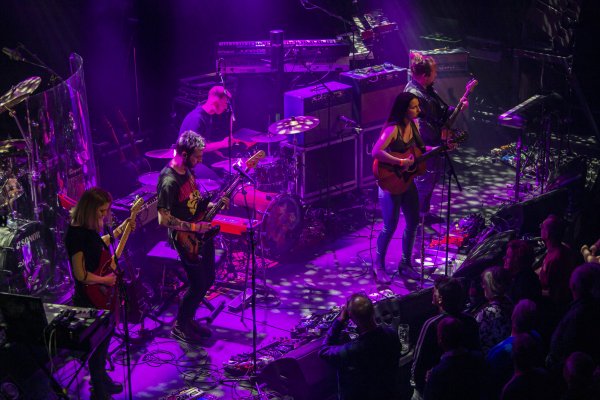 At around a quarter-past-nine, the guys from Kayak take the stage. Opening track Traitor’s Gate comes from the latest studio album, Out of This World, but cannot yet set the room on fire. This will change dramatically with second song Somebody – let the party begin. La Peregrina is the mini prog opera of the excellent Seventeen from 2018, and it’s an excellent showcase for these musicians to demonstrate their considerable capabilities. Guitarist Marcel Singor claims the spotlight for four minutes with a flawless rendition of the instrumental Kaja. It’s the virtuoso string picker’s birthday today, the ‘Long may he live’ is loudly sung along by the crowd for this local resident. 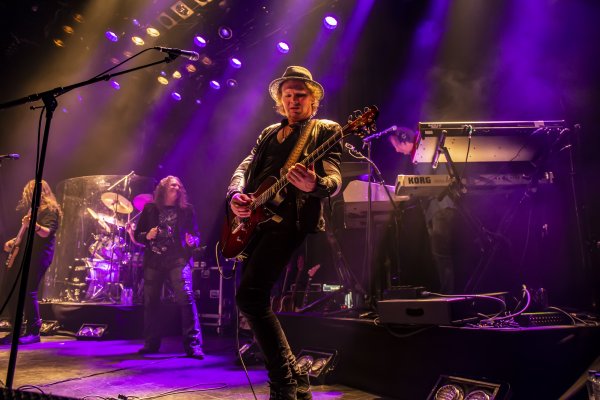 For Daphne, Bart Schwertmann takes on vocals once again while Mammoth, dating from 1973, is given a kind of heavy metal treatment. No barrel organ sound this time, but instead two bass players, Singor taking on lead vocals. Still My Heart Cries for You is dedicated to drummer/composer Pim Koopman, who passed away in 2009; a nice gesture. Not an acoustic but an electric version of Seagull this time, Singor’s guitar making it sound more like a country song. Alibi is a fast, straight-forward rocker, and is Said No Word really from 1965? No, an obvious miscalculation of ten years by ringmaster Schwertmann, the band is not that old. Irene is an instrumental sea of tranquillity after the hectic sounds of its predecessor.

It’s time for the soundtrack of Spetters, director Paul Verhoeven’s cult film from 1980. Again instrumental, but very different: short but intense with a nice guitar duet between all-rounder Schwertmann and Singor. A Million Years is a melodic ballad with fretless bass and emotional vocals, very different from the recent Waiting, a defiant, funky song with Marcel Singor as lead singer. Out of This World, the title track from the band’s most recent album, is heavy prog pop, typically Kayak, with powerful hits by drummer Hans Eijkenaar and a snippet from Chance for a Lifetime. 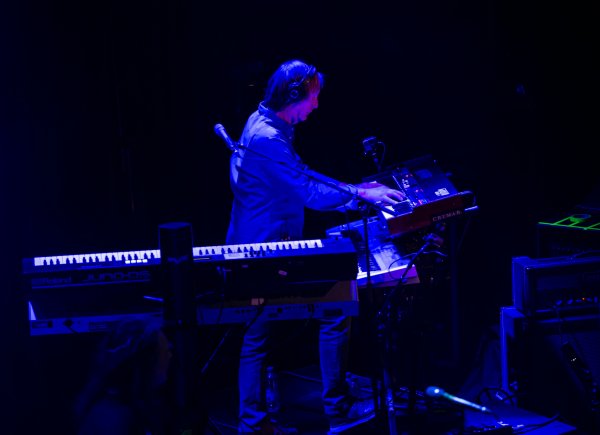 A magical Merlin is, as always, a brilliant highlight at Kayak shows, and this time is no different. From the same album about the legendary wizard comes Niniane, with a masterly intro and middle section by Kayak’s own (keyboard) wizard, maestro Ton Scherpenzeel, towering high above his fellow musicians, surveying the whole graciously, scattering beautiful solos and fine background vocals. His Roland Fantom G8 keyboard showed some problems however, especially the piano parts which sounded strange and tinny.

For Starlight Dancer, powerhouse drummer Hans Eijkenaar doesn’t have to hold back, this is Kayak at its best. After the few seconds during Out of This World, now a full version of Chance for a Lifetime, Eijkenaar’s drums sounding like cannon. I’m sorry: it still takes a little getting used to that this song is not sung by former vocalist Edwin Reekers, but Schwertmann does a great job during closing track Ruthless Queen. The quintet receives a thunderous round of applause from the audience, the show is not completely sold out, but nevertheless a good turnout.

Bart Schwertmann’s stage presence is energetic and sympathetic at the same time, he radiates enthusiasm and joy, which clearly spreads to the audience. If Edward Reekers is Jon Anderson then Schwertmann is definitely the band’s David Coverdale, which definitely fits better with Kayak’s current sound, heavier than ever. 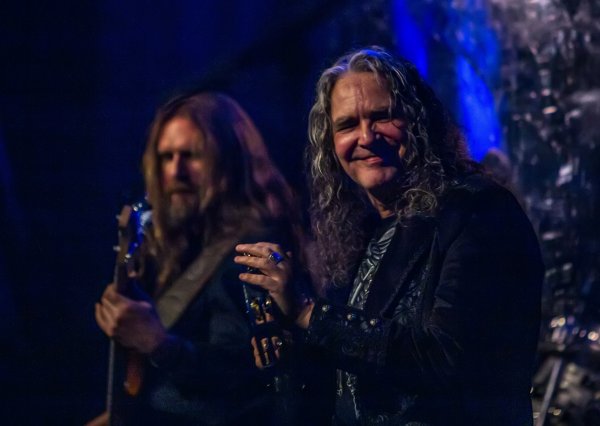 Kristoffer Gildenlow is the BFG in person, on fretted and fretless five-string bass, as always remarkably unobtrusive. Drummer Hans Eijkenaar is confined to his Perspex fishbowl for the entire performance. That does not prevent him from some excellent drumming. Just like three years ago, guitarist Marcel Singor regularly steals the show. What a killer guitarist, flawless in spite of the relatively complex material. His talent had also been noticed by Fish who asked him to replace John Mitchell for the, unfortunately canceled, farewell tour of the Scotsman.

As a side note: one hour and three quarters including an encore, that is a bit meager for a band that has existed for over 50 years and has released 18 studio albums. It simply couldn’t be a shortage of material. So unfortunately no See See The Sun, Lyrics, Phantom of the Night or Close To The Fire. 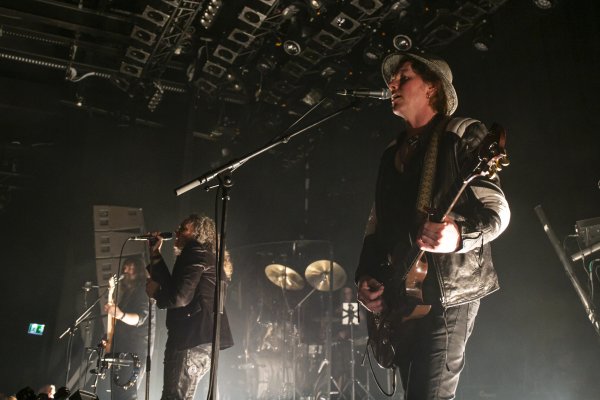 The sound was particularly LOUD this evening, which may have to do with my position, just in front of the PA. A small price to pay, this temporary deafness. This was an excellent and energetic performance from a professional and well-oiled band, even though this was only the second show of their farewell tour. The current line-up seems to be the most suitable for the music Kayak produces now: more rock, less prog, but more balls, pardon my French. Quite ironic; now that the band has finally taken its definitive shape, they call it quits. But hey, that’s just the way it is, the final chord was a mighty one. An excellent show by Kayak, a real pity folks in the UK will not have the opportunity to see them live: due to ‘external circumstances’ beyond the band’s control, both London and Manchester shows had to be cancelled. Alas, as one of Holland’s most influential progressive rock bands has knocked it on the head. Never to be seen again in the flesh.

With photos by Eus Driessen, used with many thanks.