I’m not even sure what I experienced on Tuesday night in Denver at Larimer Lounge. To boil it down to one word would be ‘flabbergasting’, as in, I was flabbergasted at the musical ability and shows that were put on by Faun Fables, Cheer-Accident, and Free Salamander Exhibit.

I arrived just at the start of Faun Fables, having missed local Denver act Chaff. Led by Dawn McCarthy and Nils Frykdahl (of Free Salamander Exhibit), I’ve wanted to see this duo for some time, having been a huge fan of 2010’s Light of a Vaster Dark. I’ve described this album to friends as psyche-folk, although I’m not sure many would agree. Their music is so compelling, and never empty, even if it is just Dawn’s beautiful airy vocal coupled with acoustic guitar. To me the music has a strikingly European feel, hints of the Renaissance flourish, as well as containing elements of Celtic music, Scandinavian folk, and even Gregorian chanting. 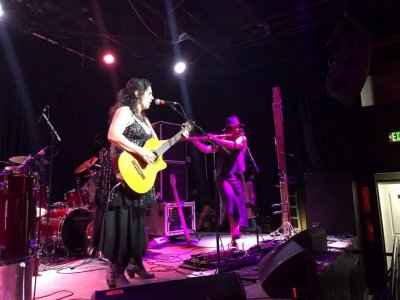 At one point Nils played a three foot long flute, using not just his fingertips but his entire finger to find certain pitches, while also using his feet on pitched bells at the same time. The duo had a rather large sound, the single classical nylon guitar was full, especially when doubled with flute and vocals.

The room was packed, Larimer Lounge isn’t very big, but every single person in it was captivated by Dawn’s voice. You could hear a pin drop during all their songs, and when people did cheer at points in the song, you could tell that the duo wanted, commanded, and deserved silence. Dawn and Nils switched instruments several times which gave each song a different feel, the highlights in the set for me being Joshua, a song I believe was written by Dawn’s friend about her son, and Ta Nasza Mlodosk, a truly mesmerising song where the vocal melody and counter melodies seem to never stop. 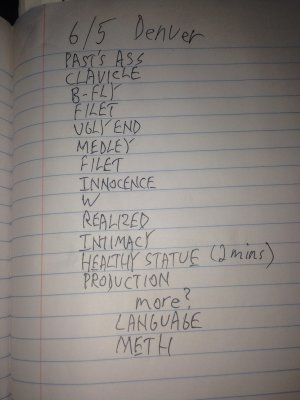 I have to be honest and say that I had sadly never heard of Cheer-Accident before the show. This is sad because this was truly one of the most overwhelming sets of music I have witnessed, and left me wanting to know more about the band. It was a brutal assault of musical consistency and power. The band barely paused for breath, the first time being at a very tight ending of the first tune, which the drummer joked about. Their guitarist played a Fender Strat throughout the evening, and had great tone, much like the bassist who was rock solid. He played with a pick but mostly did fast runs with his fingers, his sound quite varied as he used a pedal board with great results.

I only learned one song title, and that was Filet of Nod which could have been as short as 3 minutes or as long as 9 – you lose track of time on songs like this. It was mostly a one measure syncopated riff that repeated, and repeated… and repeated, driving half of the audience towards the door, which is a goddamn shame. It takes such concentration to do that and not change. Someone referred to it as ‘musical trolling’ and I don’t think they are really wrong. But it was also incredibly funky, and beyond tight. It was hilarious and I have never seen a band do anything like it. Cheer-Accident are a daring prospect, and it would be easy for a band this wild to lose sight of dynamics, but they never did. Because of this their set was that much more impressive.

The keyboardist had a great voice as well, and also played what looked like an oboe. At points her parts matched or harmonised with the guitarist. I would have liked to maybe hear some more vocals from her, but I will just have to go to more shows. At one point she appeared to be hitting a pad which would then say names of famous musicians and people from the 1980s. It was absurd in the best way possible. 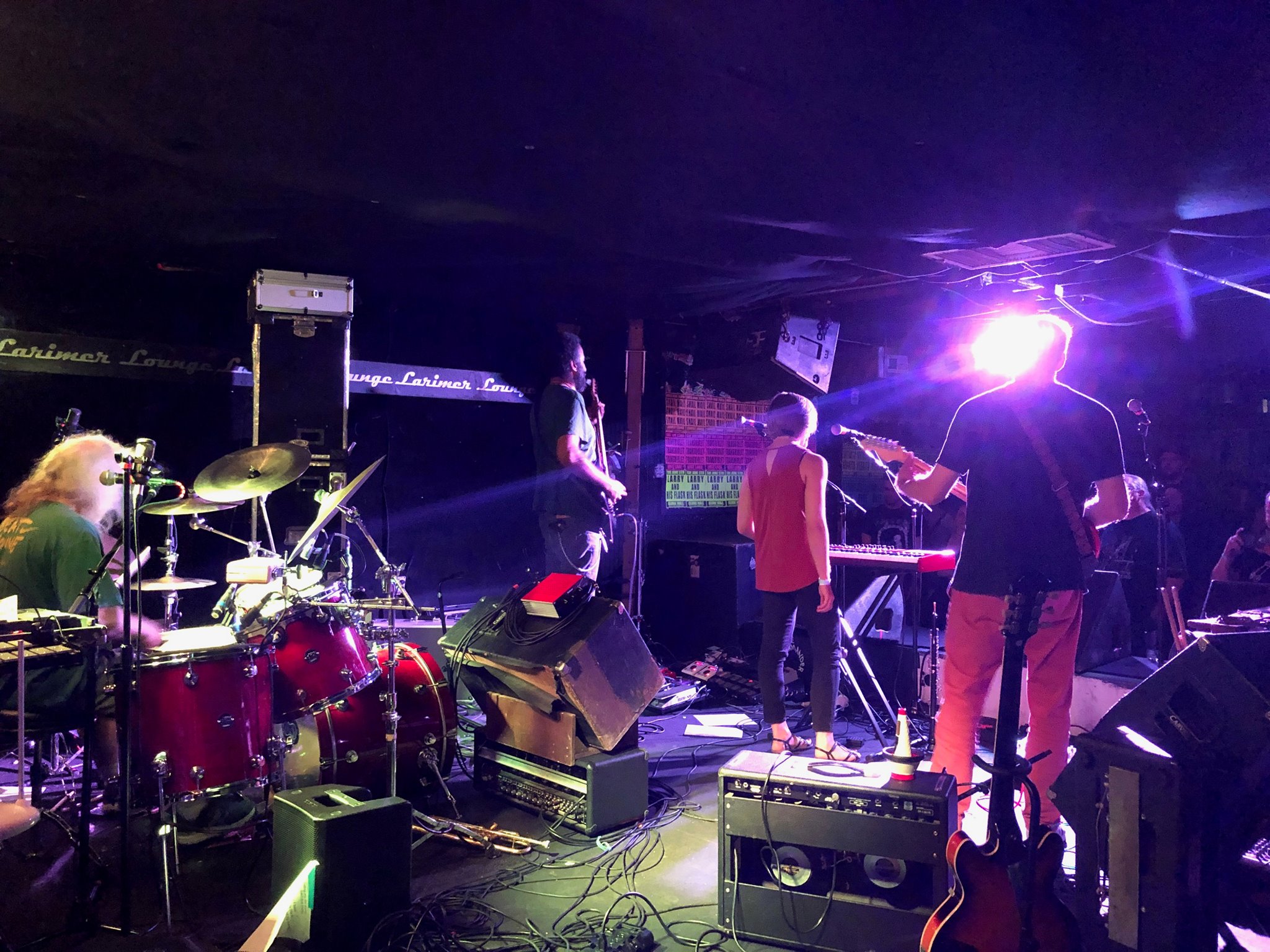 Like Filet of Nod, a lot of these pieces never really went anywhere, they just took you on a journey and dropped you off a cliff. But there were other songs that did attempt to bring you to resolution, like when the drummer came forward to play trumpet, along with the guitarist, and the singer played both trumpet and oboe. A tape played on the PA while the band played over it, then the instruments were lowered for silence. Some time passed. Then more. I thought ‘I must be experiencing a cover of

This was my first time seeing Free Salamander Exhibit as well, and they did an excellent job at playing most of their debut album, Undestroyed. The show began before the band was in stage, walking through the crowd in full costume, each member with some sort of flute or horn. The music evolved as they got closer to you, then faded as they were on stage. Finally the soundman cut the music through the PA and the ceremony began.

I’m not sure how long the band rehearsed this music, but I have a feeling it’s longer than some bands exist from start to finish. The second I thought I had a grasp of the music, something would change. It’s a nod to Stravinsky and the great composers who compose highly complex phrases. 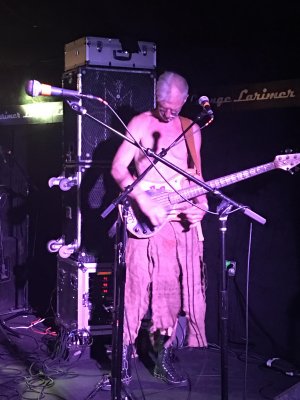 The three guitarists did a remarkable job of never playing each other’s parts, the slight tone variation not only necessary but helping with balancing the long compositions. There seems to always be dissonance, which is used to great effect. Bassist and vocalist Dan Rathburn did a great job singing and playing the complicated line on Time Master, which is the most accessible tune from the album, while guitarist Michael Mellender doubled the melody on flugelhorn. The drummer doubled snare hits with Nils on flute in The Gift, showing how accents can be used to great musical effect. Mellender also sang nearly as much as Nils, and had a very similar style.

Nils is a great frontman, actor, guitarist, and flautist. He seemed to do it all on stage, and his banter with the audience was great fun. It’s easy for the strangeness and uniqueness of this band group to feel dark, and while Free Salamnader Exhibit’s forebears Sleepy Time Gorilla Museum were a sort of carnival show, Free Salamander Exhibit is similar but musically very different. They are much heavier and prog than SGM ever was. The musical parts are much more precise, and it can be overwhelming. For most of the set I was nodding my head back and forth thinking ‘what’s happening?’ and I think that is something that is missing from many bands. At one point I just had to close my eyes and let the music take me over.

Free Salamander Exhibit is a band whom I think of as being ‘beyond prog’, their music is so complex that at times it may appear to be void of feeling, but nothing could be further from the truth. What is true is that when you hear this band, you are completely encased in their world. There is hardly a break to draw breath. There is never a chance for you to think about what you are perceiving, you just have to accept it and move on. It’s what great art does, it smashes you in the face, and truthfully the entire evening was like that. Every band brought their game to the people of Denver and those who experienced something new may never be the same.