Anyone who has seen Franck Carducci and his band play live – in any incarnation – will understand the thrilling sense of exuberance and enthusiasm that they bring to their performances. It’s a hugely engaging experience, filled with smiles and fun – in fact they barely stop smiling through the entire show, particularly drummer Léa Fernandez who clearly loves every second of what she does.

Franck’s current band, The Fantastic Squad, is very well named – they’re simply fantastic. Tight as you like and a thumping good rock band with style and panache, playing even small rooms (as tonight) as if it were Wembley Stadium. In fact, it’s a mystery to me why they are actually in Porthcawl at all. I grew up in the town – it’s not a hot-bed for touring bands…

This has been a very successful tour for Franck and the Squad, in terms of the response at least, this being the tenth of eleven UK dates – the final show most unfortunately cancelled due to an unforgivable admin (and arithmetic!) cock-up, fan power stepping in at short notice to set up an impromptu house gig to replace it (which should be underway as this piece is published – well done Rod Moor-Bardell!).

Due to circumstances, I only caught the last few minutes of support band Last Flight to Pluto (with apologies to them), but they sounded more than capable and played to a good crowd – many of whom inexplicably left after they had finished! 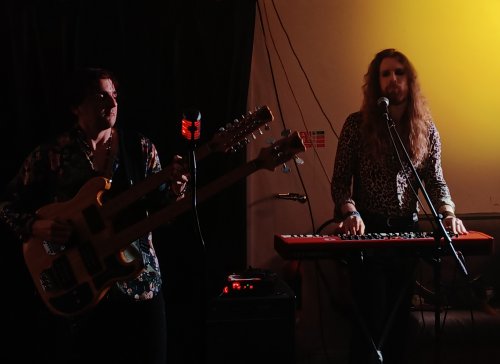 Franck and the Squad hit the stage to an audience of about 25, and the sound quality was immediately excellent, clear as a bell and pitched at just the right volume, meaning that the plugs deployed against the fierce volume of Last Flight to Pluto were quickly dispensed with. The band is well drilled and despite, I’m sure, a little frustration about the relatively small number in attendance, they launched into the anthemic (Love Is) The Answer, the almost title track to Franck’s latest album. The quality of the band shone through right from the start and they quickly get the audience on side. 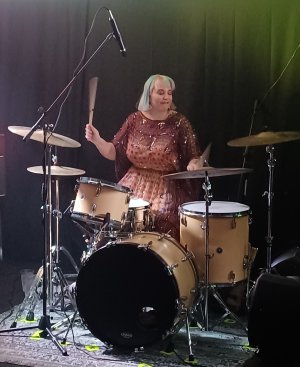 This band rocks like a bastard when they get going, built on the solid foundation laid down by Léa – I really could watch her all night – with guitarist Barth Sky throwing shapes and peeling off some wonderful solos, and the keyboard and backing vocals of Cédric Selzer adding greatly to an expansive and detailed sound. Franck is the master of ceremonies, trusty double-neck in hand to guide us through the stories the band relate, including the ecological message of new song The Betrayal of Blue. Mary Reynaud’s vocals add a scintillating extra dimension and she comes to the fore in the more theatrical songs, playing the Theremin in tantalisingly unorthodox ways and dancing alluringly, taking on various characters via costume changes and props, from the naughty heroine of Alice’s Eerie Dream (Franck donning his trademark hat) to the more spiritual presence of The Angel. I may well be putting my left-over birthday vouchers towards a spangly bra and hand-held laser combo…

Franck gets a solo slot to lead a rousing sing-along of Pink Floyd’s Wish You Were Here, most people clearly knowing all the words and happy to join in with gusto. The selection of The Ecstasy of Gold from Ennio Morricone’s The Good, the Bad and the Ugly soundtrack was an inspired choice and a marvellous addition, and after a concluding visit to The Asylum there’s a perfect conclusion with The Beatles’ The End, to tumultuous applause. 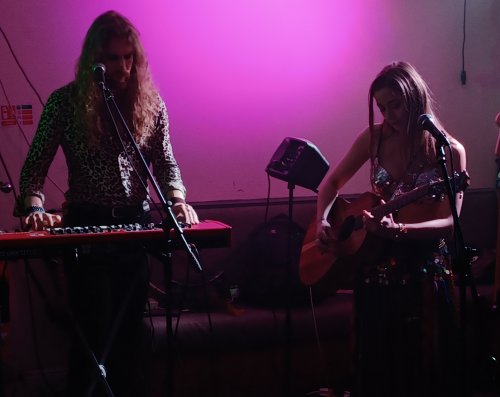 The well-deserved encore is a fantastic romp through the Blue Öyster Cult vibe of Slave to Rock ‘n’ Roll, Franck swapping his hat for a flashier and more illuminating one, before the wonderful harmonies of an a capella and unamplified On the Road to Nowhere makes for a magnificent finale. The comments I heard in the crowd afterwards suggested that many were completely blown away by the performance, and despite having seen them previously and knowing what to expect, I was one of them. Not a single dip in momentum, everyone playing impeccably and giving their all – a truly fantastic show. 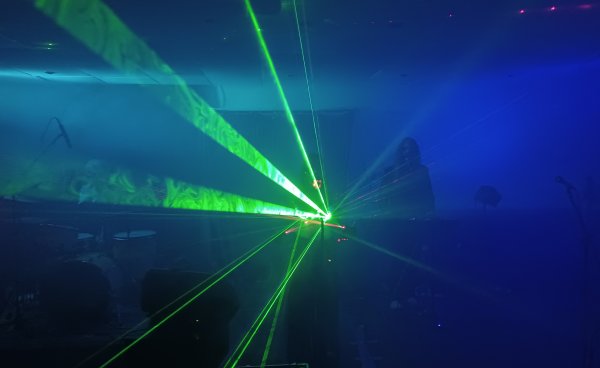 It’s often forgotten – in the prog spectrum at least – that rock music should be about entertainment. Complexity and technique frequently become the defining factors instead, but putting on a show and feeding off the warmth of the audience is far more important, and Franck and his talented band are experts at drawing in an audience for a collective good night out. Thank you guys!

And off into the night I went, grinning like a fool…

They’ll be back. Miss them at your peril, and take along other folk who you think might enjoy it – the band deserve it, but so do your friends! 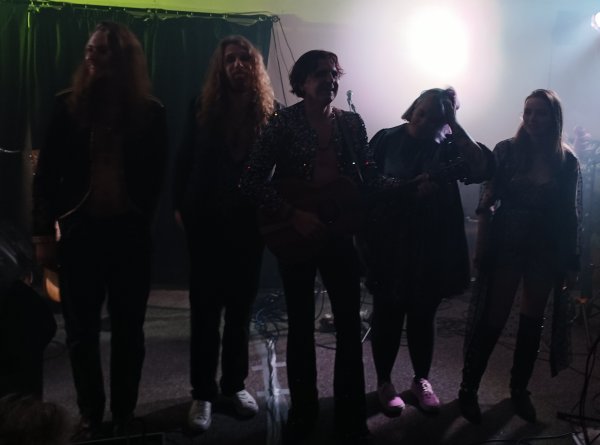 SETLIST
(Love Is) The Answer
Closer to Irreversible
The Betrayal of Blue
Mr Hyde & Dr Jekyll
A Brief Tale of Time
Wish You Were Here (Pink Floyd cover)
The Angel
Torn Apart
Alice’s Eerie Dream
Asylum
The End (Beatles cover)
~ Encore:
Slave to Rock ‘n’ Roll
On the Road to Nowhere (a capella)