In the week leading up to what was meant to be our glorious (?) Brexit Day for the U.K. it was perhaps appropriate that Bristol was treated to a cosmopolitan show from two fine European bands, from Holland and Poland, which was responded to ecstatically by a British crowd, sprinkled liberally with a diversity of other nationalities. Later in the show Riverside singer Mariusz Duda mischievously declares his relief to be playing in Britain at this time, in contrast to the divisions splitting his own country, Poland, which generates a groan and ironic laughter from the partisan crowd – but this night isn’t really about overt politics. As Duda points out, and the rapturous response in the room clearly indicates, it is the power and magic of music that unites everyone in that building tonight.

The SWX were also treated to an impressive opening set from the young Dutch band, Lesoir. The talented guitarist Ingo Dassen seemed equally adept at conjuring Gilmour-esque sounds as well as weird sound effects from his instrument. Playing many songs from their most recent album Latitude, this band entertained the audience with an interesting mixture of melody and heavier chops. Their female vocalist Maartje Meesen showed great versatility, easily switching between singing, playing flute and  keyboards – all with great aplomb, most notably on the diverse finale song Faith is. A delicate pastoral instrumental was a perfect vehicle for Meesen’s flute playing. At other times Lesoir were able to rock out with heavier riffs, particularly on the outstanding and epic sounding Eden’s Garden, and gained a very positive reaction from the crowd. They are a young band who will probably develop more stage presence with experience as their material matures, and they have a promising future.

[All photos by Mike Evans, used with permission and many thanks.]

Riverside came onto the stage and instantly hit the crowd right between the eyes with the heavy riffing opening to Acid Rain, before deftly changing gear mid-song into the groove laden Dancing Ghosts section from their recent high quality album Wasteland. Wasteland is  their first proper album release since they tragically lost their great guitarist Piotr Grudzinski in 2016. Tributes are rightfully played to their lost friend, but this is no sombre commemoration. 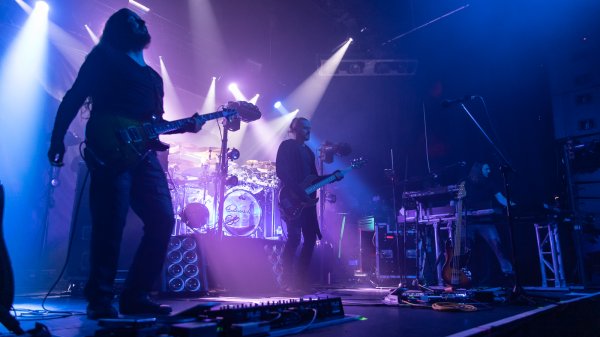 This is a band on fire, playing with assurance, confidence and joy, drawing on the immense goodwill and love of the Bristol crowd – a city that has always loved Riverside from its early days. Apart from the stellar musicianship and undoubted high quality of their impressive canon of songs, what is also notable about this show is that Riverside have really grown as stage performers, backed up with a truly eye-popping and fascinating lightshow. Further Wasteland songs follow with a muscular version of Vale of Tears, reminiscent of Porcupine Tree, and a more reflective perspective in Lament, complete with mournful violin sounds. These new songs are split by a spectacular and intense rendition of classic instrumental Reality Dream I taken from their 2004 debut album Out of Myself . The trip down memory lane continues with the title track from that album, which features Mariusz Duda’s great bass playing and powerful vocals, introduced by the opening section from Saturate Me. 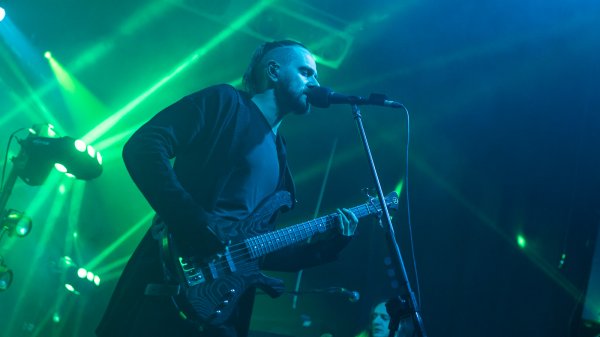 Duda is clearly in a buoyant, positive mood and mentions progressive rock, explaining to the crowd that they “can be young” and announcing mischievously that “we’re NOT playing Supper’s Ready tonight!” There is a real sense of rapport between the band and crowd, and even though tongue in cheek, Duda’s announcement indicates that Riverside tonight are focusing more upon rocking out rather than delving into more widescreen musical landscapes of a more ‘Prog’ nature. This is amply demonstrated by playing Left Out and a scintillating version of Egoist Hedonist, showcasing Piotr Kozieradzki’s powerhouse drumming, from their heaviest 2010 album Anno Domini High Definition. 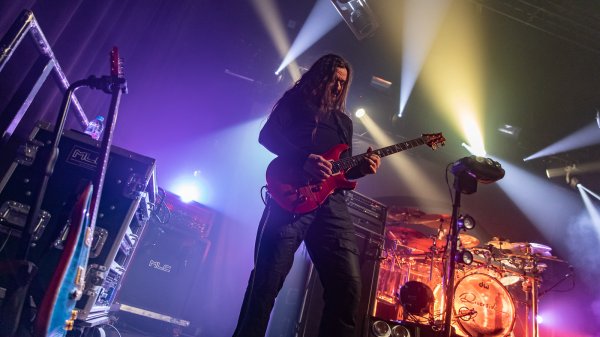 Of course, Riverside have a much softer, more contemplative side, exemplified by a gorgeous performance of Guardian Angel, featuring a sensitive acoustic guitar performance by guest live guitarist Maciej Meller, usually of Quidam, once again brilliantly reprising his live guitar role from their previous tour. The strangely under represented showing of material from their wonderful 2015 album Love, Fear and the Time Machine does at least give us the sparkling jewel of a song Lost (Why Should I be Frightened by a Hat?), which showcases the mellifluous and versatile voice of Duda. It is perhaps significant that songs from that album have largely been replaced by songs of a heavier direction and when they are as great as the tremendous and pulsating instrumental The Struggle for Survival from Wasteland, there can be no complaint. Michał Łapaj dazzles the SWX with an electrifying synth solo as the whole band almost goes into orbit with the power of their show. Not many bands would end their main show with a new song but such is the confidence of Riverside and the high quality of their new material that the crowd dive into the flow and growing maelstrom of Wasteland with delight as the lights dance and hypnotise a totally captivated audience. 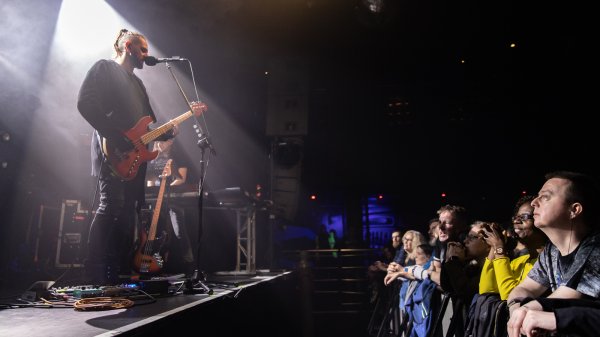 The encore features the rolling tank of a song O2 Panic Room, the only Rapid Eye Movement song this evening (a criminally under represented album in this show for this reviewer!), which taps into the excited and animated feel of a crowd bowled over by a stunning performance. Before Riverside calm things down, wrap everything up and send everyone home very happy, Mariusz Duda shares with the crowd that 2016 was tough for the band but thanks to the love of their fans they survived – he declares that they feel revived as a band and that sadly departed guitarist Piotr is “still with us in our hearts”. Roadie Mateo joins the band on bass, freeing up Duda to play acoustic guitar on a suitably elegiac River Down Below. It’s an emotional and dignified way to finish off the gig, truly unifying the whole crowd under the spell of their skilful and intuitive play. Numerous fans can be heard later as they leave saying that this was the best they had ever seen Riverside.

Let’s be clear here, Riverside have always been a class live act – but on the evidence of tonight it’s fairly obvious to anyone attending this gig that they had witnessed fine artists who have truly ascended into a World Class band, right at the top of their game. Gig of the year so far? Definitely.

[All photos by Mike Evans, used with permission and many thanks.]

SET LIST
Acid Rain
Vale of Tears
Reality Dream I
Lament
Saturate Me (Instrumental intro only)
Out of Myself
Second Life Syndrome (first part)
Left Out
Guardian Angel
Lost (Why Should I be Frightened by a Hat?)
The Struggle for Survival
Egoist Hedonist
Loose Heart
Wasteland
~ Encore:
02 Panic Room
River Down Below