For a band that have sold millions of records, books about Supertramp don’t seem to come around very often, certainly not compared to other ’70s rock giants such as Yes or Pink Floyd. That’s a shame because there are certainly some interesting tales to tell, including millionaire lifestyles, band struggles, musical partnerships, classic albums, breakups, breakdowns and bust ups over the last 50 years.

Abel Fuentes is one of the earliest contributors to Supertramp fan website The Logical Web. Alongside colleague and friend Juan Lago, he has produced one of, if not the most complete websites for Supertramp information.

Out of that website now comes a book, entitled Tramp’s Footprints. Written solely by Abel (with an introduction by Juan) and originally published in the author’s native Spanish as Huellas de Vagabundo, this is a comprehensive look at the history of one of rock music’s most enduring bands, from the beginning in late 1960s England right up to the 2020s. 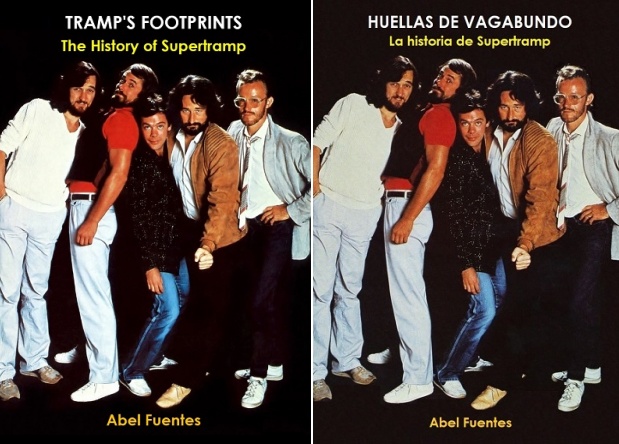 Focusing on such a long time period means that, as biographies go, this a big book – 745 pages in fact, and containing over 250 images. It’s a long read for sure, but the story flows and the chapters are edited in such a way that I found at the end of each I would want to carry on and find out more.

The book is ordered chronologically and builds nicely to the big breakthrough for the band with third album Crime of the Century, which was voted one of the top 100 albums of all time by the readers of Prog Magazine. There are snippets of information to keep even hardcore fans happy, taken from interviews with not only the band but other members of the Supertramp ‘family’, such as engineers, producers, touring crew and relatives who were around at that time. The author has managed to secure the input of all the major players, having conducted over 100 exclusive interviews, including with all the band members past and present. Abel’s credentials mean that founder members and chief songwriters Rick Davies and Roger Hodgson are interviewed, as are long time ‘classic’ line-up members, saxophonist John Helliwell, bassist Dougie Thompson and drummer Bob Siebenberg.

The late 1960s and early ’70s part of the book illustrates the fertile music scene at that time, with tales of many bands playing venues up and down the UK and abroad, characters coming in and sometimes out of the story. It’s an era unlike now, with Supertramp’s record label A&M offering the band time and money to create that special album. This certainly benefitted Supertramp, who did have the odd hit single around this time but had no rock star profile to attract the mainstream press. The book focuses on Supertramp’s efforts to create an unparalleled listening experience with Crime of the Century, highlighting innovative recording techniques, the importance of album artwork, track selection and running order.

Supertramp had a rare experience of major success in two different eras, most casual fans being familiar with Crime of the Century and Breakfast in America, one of the biggest selling albums of all time from a progressive rock band, since its release at the tail end of the 1970s. The book paints a vivid picture of the time, the album’s creation and subsequent mega tour. All five members who played on both those albums are well represented in the book, but it’s the relationship between songwriters Rick Davies and Roger Hodgson that provide the most intrigue.

The book also focuses on solo material from the members, even the smaller and less successful albums have a dedicated page or two, which is a nice touch. I also enjoyed the anecdotes from Europe, with Abel illustrating Supertramp’s record sales and concerts in Spain and France. More recent band activity, which is less well reported elsewhere, is also covered here, and there is a comprehensive appendix of tour dates, record release dates and even the tenure of each band member.

As mentioned, the book is lengthy and great value for money, I felt. A very minor disappointment is that the many photos are only reproduced in black and white, I guess for cost reasons. The book has been translated from its original Spanish so there is the occasional mistranslation (from my English mother tongue perspective), but it seriously doesn’t detract from the book which is an excellent read. It certainly had me hooked and although it appears the author has a relationship with all the classic line-up members, there is no skirting around the more controversial matters such as the split, the relationship between Rick and Roger, the broken ‘agreement’ over the band playing Roger’s songs live, ownership of the band name and others, which I’m sure may surprise. You will have to read the book to find out more.

Overall, this is not only essential reading for any Supertramp fan, but also a fascinating and engaging read for any fan of classic rock in general.