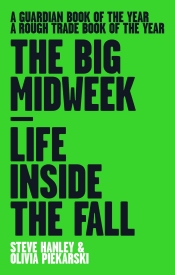 Stephen Hanley was the bass player in The Fall for some 20 years. The Fall, as if you didn’t know, were a band run with an iron hand clutching a pint of godawful cheap lager belonging to The Most Unreasonable Man In The World, one Mark E Smith. If ever the adage “Never meet your heroes” applies it’s to The Bard of Prestwich (RIP). The Fall were also, when on their game, one of the most innovative bands to have come out of post-punk, and live they were either brilliant or a shambles. There was nothing fair-to-middling about The Fall.

It is imperative to point out that you do not have to be a fan of the band to enjoy The Big Midweek, as it’s as much a social history, and a journey through a prolonged deteriorating relationship as it is the story of a band. The Fall was famous for it’s ever-shifting line ups, players sacked on the erratic whims of the Curmudgeon in Chief, whose declining mental health during Hanley’s long tenure ran parallel to his ever-increasing alcohol intake. There is also a conjoined marked drop in the quality of his lyrics, which at the start and for a number of years were Northern English barroom polemics made into the most surreal wordwangs one can imagine. Actually no-one but Smith could imagine them, which is what made him a one-off, perhaps the last of the true English eccentrics.

Hanley pulls no punches where Smith is concerned, but also recognises his own shortcomings, which is now de rigeur in rock ‘n’ roll books. The last few pages leading up to the infamous band fight onstage somewhere deep within New York, culminating in “(H leaving)” make for probably the saddest conclusion to a music biography I have ever read. For all that, the tome is very entertaining, down in no small part to mercurial drummer Karl Burns’ antics, which I am reliably informed tell only a tiny part of the story of his gross excesses.

The Big Midweek is by turns funny, sad, poignant, self-effacing, honest, grim, and light-hearted. A “must read” I’d say. 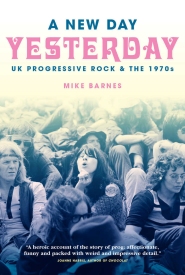 Many moons ago I wrote a short and fairly subjective history of what is now known as ’70s Prog Rock on my blog. It ran to four parts, and was one of the longest blog entries I ever wrote. Reading this weighty tome makes me realise that an amateur scribbler like myself just does not have the discipline or the time to do a subject that wide ranging the justice it deserves.

Mike Barnes is a freelance music journalist of long standing, and has written what should be, but doubtless won’t be, the final word on the rise to dominance of Prog Rock in the UK in the 1970s, and has given it a suitably convoluted title, to boot. A New Day Yesterday: UK Progressive Rock & The 1970s is an exhaustive trawl through the gestation of that initially English, and peculiarly middle class phenomenon, including detailed histories of all the big hitters that formed the vanguard of the genre, as well as an analysis of what in Barnes’ opinion were their important albums. Some of the lesser lights also get mini potted histories, which is good to see. Oh, and a light is shone on the role of drugs, but not in the Genesis bit, obviously.

Mike’s journalistic skills are to the fore in the descriptions and analysis of the bands and their significant albums, and he manages to combine that with an entertaining style that gives the book an unputdownable quality. The book is not a hagiography; the main book title is a Jethro Tull song, the excesses of whom are described as “brain-curdling bombast”, and Pink Floyd were “miserablists”. However, it is obvious that Mike is a prog fan – how could he have written this otherwise? – and so direct criticism is at a minimum. King Crimson’s appearance at the Rolling Stones’ Hyde Park gig in the summer of 1969 is highlighted as the point that Prog Rock was born, nay, thrust into the social consciousness of fringe popular culture, an opinion I cannot fault. In fact the further I get into the dark bromine chambers of the book, the more I find my own opinions on the subject coming back at me! See, I knew I was right all along! Heck, I even agree with his analysis of the reason for, and effect of punk… well, almost! 🙂

One thing, though… don’t drop it on your foot. 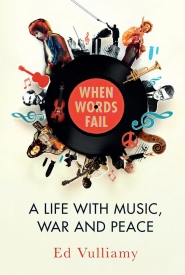 When Words Fail is one man’s view of selected pivotal events in the 20th and 21st century, observed through the lens of a highly eventful life lived without the normal restraints of workaday drudgery, and the place of music within that story. Ed Vulliamy is a war correspondent and music critic, a curious combination if ever there was one, but one that lends itself to the never dull theorising on the human condition contained within these pages. The book becomes ever more readable as you get into it, and the importance of music as an ingredient for a better world is made all the more obvious.

From Hendrix’s final UK appearance at the 1970 Isle of Wight festival to the eerie, yet hopeful descriptions of a refurbished Bataclan theatre after the 2015 terrorist attack, Vulliamy weaves music through the political, social, and wartime events of modern history. This unusual approach would only work in the hands of an empathetic writer, which Ed certainly is. The book is interspersed with short chapters describing encounters with various musicians and music, each mini-chapter prefaced with the pithy legend “7” Single”, a neat way with a description being one of Vulliamy’s many talents.

The author always returns to his beloved Shostakovich, and among many other things, offers his view on the often misunderstood composer’s relationship with his Soviet masters. This part of the story alone, especially the references to the siege of Leningrad, and the resulting extreme privations suffered by its citizens is worth the entry fee alone. It made me listen to Shostakovich with new ears, and for the first time in many years, which in turn led me to re-kindle a dormant love of classical music. Steve Reich seems to be on repeat at the moment! For that alone, I am glad I read this book, and it may hopefully inspire you too, should you pick it up. Highly recommended.