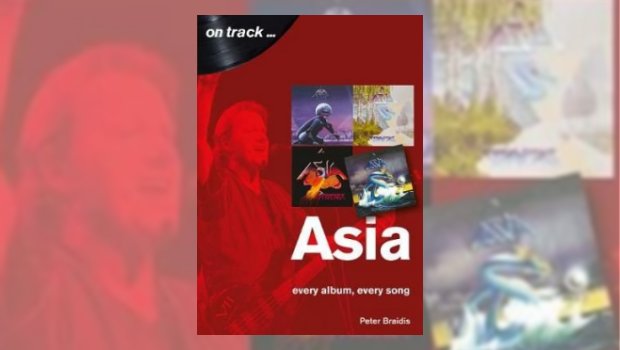 The On Track series now enjoys an impressively large catalogue. For anyone new to Sonicbond’s series, the titles focus on individual artists and provide biographical data of the band, their releases and a complete overview and analysis of every track the artist has recorded. As well as album tracks and singles, this also includes B-sides, rarities and possibly even official live releases and demos. For fans of the artists, even if they might not agree with the author, they make pretty essential reading.

One obvious problem with the On Track series, and one that has been levelled against it by a number of fans online, is that the authors’ views on each song will inevitably be very subjective. Indeed, I have read another title in this series and found myself vehemently disagreeing with some of what was said. Other critics have suggested (unfairly, I think) that these books add little more to what the listener can already piece together about the song just by listening to it. Peter Braidis’ book avoids both of these pitfalls.

The biographical detail is extensive and draws on interviews (some conducted by Braidis himself) at different periods throughout the band’s history and incarnations. The early parts of the text use quite a lot of material from Dave Gallant’s The Heat Goes On. Gallant was the man who headed up the ‘Asian Armada’ newsletter and his excellent book intimately covered the band’s history up to the end of the John Payne era. Speaking of John Payne, my greatest fear about the book is that it would be dismissive of his fifteen years with the band and the studio albums he was involved with. Not so, Braidis takes a neutral standpoint on the continued use of the Asia name, whilst celebrating the impressive quality of much of the material on those albums. Braidis is a longstanding fan who can pick out the good and the bad from all of Asia’s albums without ever really disliking any of them as a whole. As a consequence, I think he was perfectly placed to write this book and the results are essential reading for any fan of Asia or the band members’ other projects from the late ’70s until now.

It should come as no surprise to find that the debut album, and to a lesser extent the follow-up, Alpha, generate the most discussion. I thought the interviews with John Wetton provided the most interesting reflections on the first album; his detailed breakdowns of the musical construction of some of the songs made me realise how much more complicated they are than the ear might detect. Each track from Asia rightly gets a lot of attention and much is made of the unlikely success it enjoyed. Nothing is spared concerning the band’s difficulties with Geffen during the recording of Alpha and Astra, and the tension that this caused both to the band and between its members.

I’m a longstanding Asia fan, and there isn’t much I don’t already know about the band, but I was intrigued to discover that an Alpha demo called Jodie was later reworked on the Phoenix album as the superb, melodic ’80s throwback, Alibis. I was also encouraged by the author to watch the videos to the early singles. Alas, I cannot share Braidis’ view that some of these were meritorious. Indeed, I encourage you all to watch the video to Go. My word, those hairstyles! Where I was in wholehearted agreement with Braidis, though, was in his praise for the underrated Astra and his view that all three B-sides from Asia and Alpha deserved to be on their respective albums. In my view, Steve Howe’s Lyin’ to Yourself was the best track from the Alpha sessions.

The four tracks from Then and Now (all great, if not necessarily all Asia-sounding) are covered in the ‘Compilations’ chapter, so the book then moves onto the Payne albums. Whether people think these qualify as Asia albums or not (personally, I do), there’s no doubting the quality of the songwriting and musicianship on much of these. As melodic rock goes, it doesn’t get much better. Aqua, Aria and Aura are amongst my all-time favourite albums. The fact that they got anywhere at a time when this style of music was not well liked, and when labels let them down, is testament to the quality on show.

Braidis thinks some of the material on Aqua is amongst the band’s best. Although he believes Payne had a tendency toward the histrionic on his debut, there are some excellent tracks peppered with some great guitar cameos, not least from Howe. Who Will Stop The Rain is still regarded as a classic by fans and rock DJs alike. Aria and Arena he thinks feel more complete as there is a more established band. Although Aura is another album filled with cameos, Braidis thinks it’s the pick of the bunch. Prog fans really should give the nine-minute Free a listen; there are three great guitar solos here, one of them from Howe. The author has more time for Silent Nation than I did. Even with a great line-up and a deal with InsideOut, the writing felt like their hearts weren’t in it.

Overall, this is a truly comprehensive study which is both personal and, simultaneously, as objective as it can be. I suspect most fans will be in broad agreement with the author, but that fact does not ever make text less than an engaging read and the interviews and analyses are fascinating. As for the future, Braidis wonders if the material that was incomplete at the time of John Wetton’s sad passing will ever see the light of day. When I spoke with Geoff Downes earlier this year about DBA and mentioned Asia, he said he hoped that their songs would continue to be heard with maybe some live dates in the future, but there was no mention of new material. With a new Yes album out later in the year, anything else from Asia may be a little way off. This book certainly whets the appetite, though.