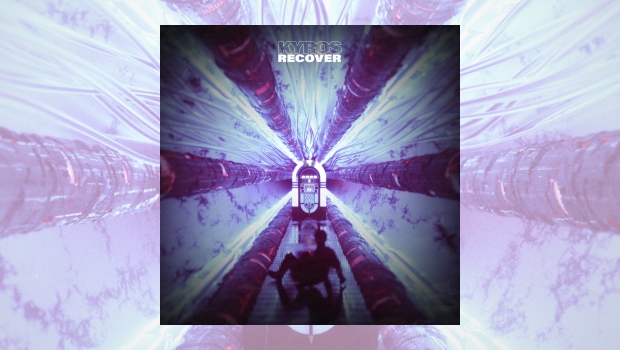 Recover is a limited edition release by Kyros in which they cover an eclectic range of artists in their own style. Let’s face it, it’s been a bloody weird 18 months since the ‘C’ word hit us all. Some artists chose to use that enforced separation to collaborate remotely to provide entertainment online and Kyros provided some of the most memorable online shows with a range of covers and different versions of their own material. Recover is a fascinating insight into the influences of this young band.

Kyros have gone through some significant transformations in terms of their music and personnel, but also more recently on a personal basis. Some may recall a very young band called Synaesthesia who made an impressive debut with a self-titled album in 2013 on IQ’s Giant Electric Pea label. In truth, Synaesthesia was more of a studio project built around the mercurial keyboardist and vocalist, Adam Warne. The Synaesthesia album marked Warne out as a talented songwriter and performer, and whilst the album was undeniably Prog in style he had inculcated some modern influences. Warne recruited a band to play live dates, including Joey Frevola, Peter Episcopo and Robin Johnson, and transformed from a project built around one artist into a band brimming with ideas and talent. Synaesthesia subsequently split from G.E.P. due to ‘artistic differences’ and transformed into Kyros. They released the epic and ambitious double album Vox Humana in 2016, moving them increasingly away from mainstream ideas of older Prog leanings into a modern progressive rock band fusing elements of rock, techno-synth, metal, pop and other styles in a rather exotic and sometimes overwhelming cauldron of sound. It was certainly in a different world to the Synaesthesia album and demonstrated that these young artists were wanting to forge their own path rather than echoing the past glories of previous generations. Follow-up album Celexa Dreams in 2020 further developed their distinctive techno-progressive rock style. On a more personal level in the last year or so, Warne recently revealed progression through a very significant transformation, undergoing a change in sexuality and name, from male ‘Adam’ into female ‘Shelby’ (Shelby agreed that this could be shared in this review to explain the change in name for readers who may not be aware, and the previous connection to Synaesthesia).

Cover projects can have mixed results, sometimes indicating when a band may be running out of creative impetus. This project, however, is not borne out of such a situation, being the result of enforced separation and a desire to still perform even when in distant locations (Frevola performing his contributions in Los Angeles). Recover reveals Kyros as a modern progressive rock band with a range of influences, most of them very much of these times, but with an awareness and regard for some of the heritage of rock music. Kyros have chosen an interesting array of artists and songs, some very well known and others I have to confess I did not know. The album opens with the unmistakable keyboard fanfare of the Genesis classic Between the Lines from 1980’s Duke. This is a fairly straight cover with some interesting flourishes, which the band delivers with great power and style. Warne excels on keyboards with titanic drumming from Robin Johnson, Frevola’s fluid electric guitars soaring above. It is interesting that this young band have opted for this particular Genesis song. They do not delve back into the more ‘Prog’ era of Gabriel and Hackett, but were drawn to the first Genesis album of the ’80s when the band were in the process of transforming from a more progressive outfit into a much more straight ahead Rock/Pop manifestation, reflecting Kyros’s synthesis of more expansive progressive elements with more accessible leanings. Kyros do great justice to this classic song and Warne’s vocals are particularly effective.

Warne has revealed that the band discussed their influences and put together a list of their favourite songs to consider, amounting to about 50 tracks! This collection shows what a diverse range of artists were brought to the table, but it appears that one band seemed to be on most band members’ ’Musical Venn Diagrams’ – Rush! Two Rush songs are covered, and once again it is interesting to note that Kyros did not look to the ‘proggier’ Rush heritage of the late ’70s, but instead chose two songs from their more synth influenced and less expansive output in the ’80s and ’90s. Force Ten (from the 1987 Hold Your Fire album) sees another impressive performance, particularly an outstanding, thunderous but sinuous bass from Peter Episcopo, of which Geddy Lee would be proud. Warne’s vocals are not as helium-like (!!) as Lee’s, but are delivered with assurance and maturity.  Later on, Kyros perform a sparkling version of Rush instrumental Where’s My Thing (from 1991’s Roll the Bones). This really is a tour de force of musical virtuosity from right across the band with great guitar from Frevola, stunning bass from Episcopo, fantastic drumming from Johnson (including a short but fluid solo) and scintillating keyboards from Shelby Warne. You can really hear the band having great fun with this effervescent track, and indeed across the whole album.

The beauty of a covers project is that sometimes one artist can introduce listeners to the work of another, and there are a few artists featured here with whom I was unfamiliar. One of the most intriguing is the quirky Under My Skin, originally by a three-piece ‘power pop’ band from Washington DC, Jukebox the Ghost. This song features playful, idiosyncratic vocals and keyboards from Warne and some great guitar flourishes – Jukebox the Ghost may well be a band worth investigating. FU by the curiously named Sordid the Pink was less appealing to me, as I have rather an allergy to the ‘Honey Monster Growling’-type vocals that briefly appear in this song, but that’s just a personal aversion! Rather more well-known is Devin Townsend, and Kyros present a suitably muscular and spectacular cover of Fluke, which apparently has met with the approval of the man himself.

It is pleasing to see this relatively young band tip their hat to some of the lesser known but important artists of the past, as shown by their cover of a song by the sadly departed but now cult figure of Kevin Gilbert. They finish the album with an excellent version of Because of You from his 1987 Giraffe project album The Power of Suggestion. This cover is an opportunity for them to show their chops in a bubbling slice of ’80s synth-pop, and such clear influences can be heard in their own distinctive music.

Recover may attract some attention for a couple of these songs performed with significant guest artists. Kyros are now on John Mitchell’s White Star Records label, so it is not surprising to see the prolific and talented Mitchell appear with some inimitable vocal parts on a dazzling cover of Heartstrings by Frost* (from 2016’s Falling Satellites). Warne particularly stands out on this track with a volcanically bubbling keyboard performance which would probably greatly impress Jem Godfrey. Haken are at the forefront of the heavier modern progressive rock bands so it seems apt that Kyros, a band with a leaning to a heavier sound, chose to cover one of their songs, recruiting Haken drummer Ray Hearne to perform alongside Johnson in an avalanche of percussion on The Good Doctor (from Haken’s 2018 album Vector).

Like their recent Celexa Streams release (of ‘Lockdown’ versions of their own songs), Recover will be available as a download on Bandcamp, but it is also having a limited release on CD to help raise funds for the run of UK shows in August and September.

At the end of the day Recover is just great fun, displaying the great musical skill of a talented young band just playing songs they love. They are a great band live so if you can get to see them it is well worth taking the opportunity, especially after so long with bands and audiences unable to congregate… and if you cannot manage to see them you could still support them by getting this entertaining album… after all, we all need to Recover.