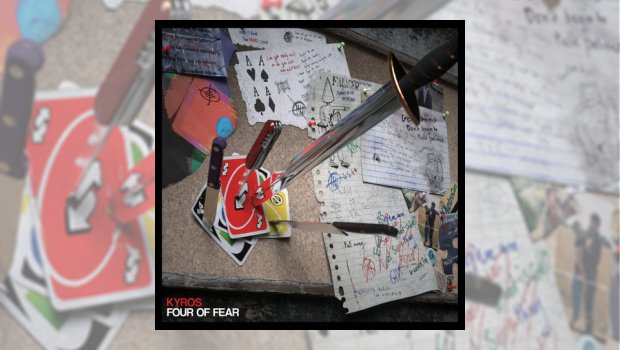 Hard on the heels of latest album Celexa Dreams, Kyros have released a surprise EP, titled Four of Fear; four further slabs of futuristic prog frenzy. Well, at least the opening track Ace’s Middle is somewhat frenzied. Beginning with a keyboard heavy overture of sorts, evoking mind’s eye scenes of some future cityscape, then a split second pause with a Neal Peart style tap of the hi-hat, and we move to a Rush style riff fest. It’s busy and bustling, bright and full of life, and that’s just the first two minutes. Another brief pause for breath, and the song proper begins. The vocals are delivered in such quick fire style that it’s very hard to follow. It takes a few listens to get a handle on the story, which follows a gambling addict trying to quit a loaded card game. It’s a great idea for a song in a modern world where we are bombarded by opportunities to gamble. Of course the sentiments could apply to other addictions, and in lockdown Britain, it seems all too easy to get sucked in to a cycle of addictive pursuits.

“Losing money and
Losing self-esteem
Wins are meaningless
In a game where
Ace’s middle
Can you really win
Or just lose a bit less?”

Musically it is a white knuckle ride, dizzying and disorienting, with some Haken style quick fire riff volleys. In fact Haken come to mind on a few occasions throughout this selection of tracks. I once met vocalist and keyboard player Adam Warne at a Haken gig, and he was clearly taking notes. Kyros are not as metallic or heavy as Haken, but their intense approach is similar, with more accent on densely layered keys. This keyboard and synth dominant sound makes for an instantly more modern atmosphere which pervades throughout. Although keys dominate, this doesn’t mean Joey Frevola is able to put his feet up, as there is some nimble and complicated fretwork adding to the tapestry of sound. This is all propelled by the heavy but energetic drumming of Robin Johnson, whilst bassist Peter Episcopo adds his own deft touches and gritty texture.

Fear of Fear brings some welcome respite from the whirlwind of the opening song, and is almost poppy in feel. It has memorable melody and some amazing falsetto vocal touches. It is very forward looking and is almost competing with Steven Wilson and his current modern pop approach. The difference here is that Kyros retain a backbone of complexity which Wilson has simplified considerably on his latest album, but I think it’s still a valid comparison. The subject matter here is another take on addiction, this time of a narcotic nature.

“Celexa dreams, awaken from one now
One pill to the next
They say it’s illness now, but aren’t we all?
We’re all misunderstood”

And the chorus “I just wanna fall away, fall away, out of obsession…”, it’s a really good song which should have made it onto the last album.

Third track ResetRewind looks at a world destroying itself and lost in a sea of selfishness and paranoia. Well, that’s my reading. Again, it’s a storming song, an epic piece unrelated to its length at a mere six minutes or so. I’m going to have to mention Haken again, because there are moments before each chorus where Warne is clearly influenced by The Endless Knot from Affinity. If you know The Endless Knot, it’s the bit where everyone starts bouncing up and down – it’s compulsory – when the energetic pulsating keyboards force you to your feet. Kyros use a similar organic pulsing keyboard effect and it is intoxicating and irresistible.

We close on a less frenetic piece called Stop Motion which is a kind of modernist march into oblivion. It is heavily produced, with effects that remind me of Frost*’s disconcerting Towerblock. The effects here are more subtle, but no less arresting. Stop Motion is a brooding final track, with a strange beauty, as it walks steadily towards a dystopian sunset, Joey Frevola playing his heart out as we fail to heed all the warnings of the previous song.

This highly accomplished work might be an EP, but it packs an album’s worth of ideas into its 25-minutes of music. Kyros may not be to all tastes as they refuse to adhere to progressive rock statutes and limitations, preferring to follow their instincts and push forward. The influences they allow are contemporary, so there is no sense of nostalgia in their music. It is music of the here and now. It is music for tomorrow. It is music which deserves to be heard. 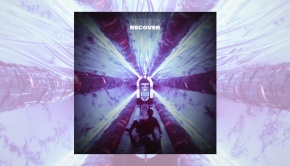