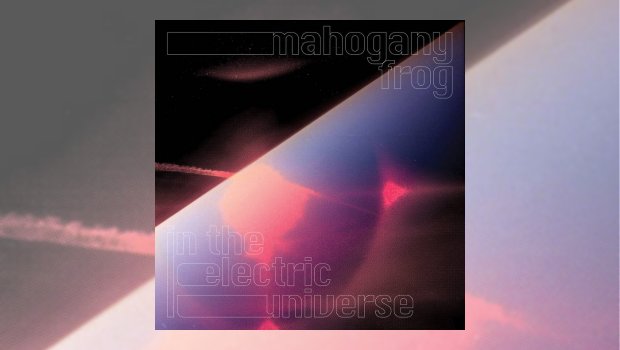 Mahogany Frog – In the Electric Universe

Broadly speaking, there are three types of music in my house which I am encouraged to listen to alone; firstly, the ‘dark and depressing’, secondly the ‘downright weird’, and finally, the ‘racket’. Mahogany Frog probably occupy ground somewhere between the second and third categories. Dark and depressing they most certainly are not, but the other two descriptions apply, and that is most definitely a Good Thing. I’ve always been strangely attracted to the weird, which I find often goes hand in hand with wonderful. And where would we be in the world of rock and roll without the racket? In the land of AOR mush, that’s where.

Well, no such fears here, as Mahogany Frog seem to have a default amp setting of LOUD which they rarely deviate from. However, metal merchants they are not, they simply enjoy making a din, and an interesting and enjoyable din it is. And there are tranquil, almost ambient moments of spacey psychedelic wooziness to contrast the noisier passages, so no trepidation is necessary in approaching this little nugget. There is structure, melodic phrasing and repeated motifs to hold onto amongst the synth and guitar madness. There are passages that remind me of Todd Rundgren’s A Wizard, A True Star and Todd period, where mad sequencers would dance throughout, whilst squawks and screeches like animal noises would appear for no apparent reason. Unlike Todd, Mahogany Frog are quite happy to go the full distortion route to make their point, and somehow it works a treat, and I find the whole affair invigorating.

In The Electric Universe is all instrumental, which is as well, as I suspect vocals would be hard to decipher through the electric soup of sound. They cover a lot of territory on this album, from dub echoes, trippy psych and trance-dancey rhythms to proggy improv and wonder walls of noise. Through it all though there are tunes, melodies to soothe the furrowed brow and massage the mind. It really is quite a trip. Opener Theme from P.D. is cinematic in scope, with Eastern sounding trumpet wails, a keyboard and drum machine drone ushering us in, then strident organ and heavy bass and big beats build to squalling electronics. At six minutes in, it all breaks down and a car ignition sets off a very basic insistent drum pattern, real drums now, which forms the base for layer upon layer of overdriven synths and guitar feedback. Prominent fuzz bass whips up a techno storm, with sequencers out of control until we gradually fade towards a distant galaxy in a wash of electro static. Possibly the most accessible track is Octavio which is full of melodic keyboards, but even this gradually builds in intensity with multiple layers of guitars and synths fighting each other for supremacy until the piece collapses under its own weight, giving way to the sound of an iron gate squeaking in the wind. Well, that’s what it sounds like to me anyway! The sprawling epic closing piece (((Sundog))) is a psychedelic tour de force which, to me, has elements of Amon Duul II, Faust, early Tangerine Dream even, and yet manages to sound like none of these.

Picking out particular performances for special attention is difficult really, as all four musicians play keyboards and electronics, for example. Instead, I’ll just say that, collectively, they have conjured an album which I wouldn’t normally expect to like, judging by some of the musical styles they utilise. Yet having taken the plunge and immersed myself in Mahogany Frog’s Electric Universe for some time, I have to say I’m totally won over. This is music of boundless imagination and creativity, it’s a glorious riot of sound, and it has reminded me, in case I’d forgotten, how much fun a racket can be.