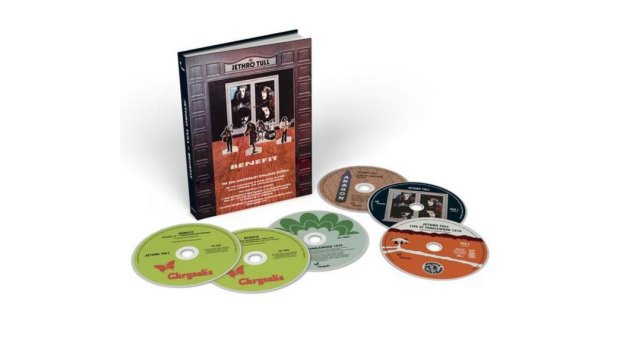 Like most rabid Jethro Tull fans, I have dutifully opened my wallet and said “Help yourself” each time a new box set has rolled out of the Steven Wilson remix factory.

And, for the most part, I haven’t regretted a single penny. Each release has been a massive improvement on the originals, rescuing some albums from the mud baths in which they were apparently recorded, while adding fascinating additional tracks and live performances.

In some ways the lesser albums have benefitted – pun not intended but worth highlighting – more than the classics. For example, the BBC TV recordings of Too Old to Rock ‘n‘ Roll, Too Young to Die! knock the original album into a cocked hat, whatever that is, while Stormwatch shows what a great album it could have been if the best tracks hadn’t been left to fester in the out-takes bin.

Y’see, back in 2013 Wilson remixed the album and its associated tracks, including a 5.1 surround sound version, as a 2CD and DVD Collector’s Edition. True, it was CD-sized rather than in an A5 box but included a 48-page booklet packed full of interviews and info. It was a nice little package for what is generally viewed as a second-tier Tull album – sandwiched between 1969’s Stand Up and 1971’s Aqualung, two bona fide classics – and I fully expected this to be the last time I would have to buy it.

Fast forward eight years and suddenly here is Benefit again, in the same size box as the rest of the reissues. Yet it contains almost exactly the same 2013 remixes, the same 5.1 version and a booklet that’s 50% identical to the Collector’s Edition. Surely this is what is known in the music business as a “shameless rip-off”?

But wait a minute, because there is more here. There are two live concerts from 1970, one of them from Tanglewood presented as a video with surround sound (because some bright spark recorded it on eight-track 51 years ago). It puts you right in the audience at a magnificent show, with a soundboard recording from the front speakers and ambient sound from the back.

There’s more to the booklet, too, which has been extended to 100 pages and includes interviews with studio engineer Robin Black, Chrysalis boss Terry Ellis and film director Joshua White (the bright spark who shot Tanglewood). And the box set does look good standing proud on the shelf with its brothers and sisters instead of looking like the runt in the litter.

But is it worth around £30 (and sometimes more) of your hard-earned if you already have the Collector’s Edition? That, as they say, is the rub because this is not, as I mentioned above, one of the best albums in the Tull catalogue.

Sure, it includes With You There to Help Me, To Cry You A Song, the poppy Inside and the sublime Alive and Well and Living In – not forgetting this is John Spencer Evan’s first appearance with JT on the old joanna. But I suspect no Tull fan, no matter how rabid, would rank Play in Time and A Time For Everything? as essential tracks. Imagine if they had been replaced by A Witch’s Promise and Teacher? What an album that would have been!

Wilson’s remix is certainly an improvement on the original – I well remember Ian Anderson’s sibilant ‘s’s during Nothing to Say on the original vinyl. Or perhaps that was fluff on the needle… Anyway, this and the Collector’s Edition contain the definitive version of this album, and the 5.1 really puts you in the middle of the recording.

Indeed, there are no fewer than FIVE separate versions of the original release in the new boxset, including flat transfers of both the British and US albums. Then there are mono, stereo and remixes of various singles and associated tracks, including both US and UK versions of Teacher, 1969 single Sweet Dream and its interminable B-side 17 and an early version of My God, which eventually appeared on Aqualung. By the way, if you are wondering why Stevie didn’t remix A Witch’s Promise, that’s because the original multitrack tapes are lost.

I guess you, dear reader, have to decide how much you want those live recordings and video, and how important it is to you to have Benefit presented in the same sumptuous style as This Was to A. Personally, both those advantages just about tip the balance for me, and once again I would be persuaded to open the moth-filled wallet.

But wouldn’t it be nice if Chrysalis said they’d knock a tenner off in exchange for your copy of the Collector’s Edition? C’mon Ian and Steve, have a quiet word…