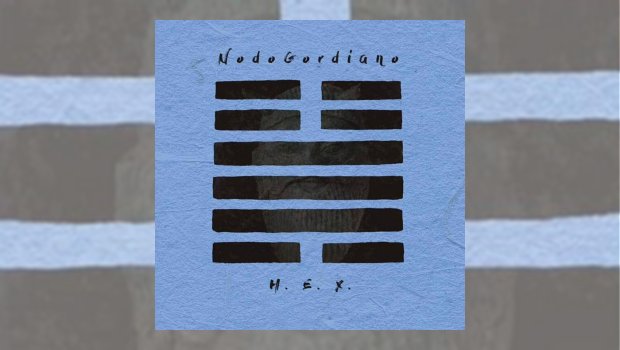 In my review for Nodo Gordiano’s fifth album, Sonnar, I mentioned in my introductory paragraph that it had been six years since we’d last heard from the band. I ended with the thoughts that “between [Natalia Surovina’s] vocals, Brilli’s stunning sax, de Luca running all over the place on bass, guitar and keys, and the powerhouse of Guidoni on the stool, Nodo Gordiano have what seems to me to be their best line-up yet, and have what seems to me to be their best album yet. I sincerely hope that not only does de Luca retain this line-up, but that they manage to follow up this album with another – and hopefully one that we don’t have to wait quite so long for.” With the exception of the absence of Surovina, it would appear I have my wish, as almost exactly a year later the same line-up have released Nodo Gordiano’s sixth album – appropriately titled Hex. Or, rather, H.E.X. (which is revealed to stand for “Hic Erant Xoana”).

H.E.X. is a very different album from Sonnar, however, consisting of only two tracks, each exactly 26-minutes in length. Their names, Heng and Kou are two hexagrams from the I Ching (specifically the 32nd and 44th). On the other hand, ‘Hic erant’ within the album title is Latin for “here were” (as in ‘hic erant leones’ – here were lions). Xoana were primitive statues carved or scraped from wood, and I’m not sure what they have to do with the album, although I’m sure their presence is deliberate, rather than simply something esoteric beginning with ‘X’ to fit the title. Perhaps it’s a play on the Zhou dynasty, given their use of the I Ching. As for the lengths of the song, well they must mean some-thing too. I’m going to guess that it perhaps refers to how old the band might be? Looking on the Bandcamp page, the debut album was released in 1999, so it’s not inconceivable the band had its beginnings 26 years ago. There are no vocals, so there is nothing really to help decipher the mysteries of the album and song titles, but ultimately it doesn’t really matter – at least not to me. The music is so magical, I don’t need meaning for it to be meaningful.

As for the music, well anyone who is familiar with the band, or who read my Sonnar review, will know that Nodo Gordiano make music in the great tradition of King Crimson. While those Krimson tones still abound in H.E.X., it opens with sounds far more reminiscent of Pink Floyd and Tangerine Dream. Fillipo Brilli almost sounds like he is caught between channelling Mel Collins and Dick Parry. In fact, while 26 years would take us back to 1995, the music of Heng takes us back a further 20 years, to 1975 – sounding somewhere between the albums released that year from Pink Floyd and Tangerine Dream. I may well be reading too much into it, but I can’t help but note that Rubycon is comprised of two tracks of almost equal length, and that Shine On You Crazy Diamond is split into two parts that add together to a total length of exactly 26-minutes. Keeping in mind Rubycon, or perhaps rather the Rubicon, Heng begins suitably with some wonderfully watery sounds, before the synths emerge in a manner of those aforementioned bands on their 1975 albums. In the I Ching, Heng stands for perseverance, duration and constancy. And this seems entirely appropriate for the sixth album from a band that has been around over twenty years.

After some squalling sax, in the fourth minute we’ve transitioned to a more industrial and mechanistic sound, which is an almost Krautrock bridge to the next section, and the return of the sax. This time the sax is less tempestuous, and more sublime – and we’re taken on a dreamy and spacey journey redolent with the muzik of the kosmische and psychedelia. Davide Guidoni injects some jazzy energy when the drums kick in, but as much as his drumming was almost impossible to ignore on Sonnar, on H.E.X. it’s very much a seasoning for an already incredibly tasty dish. In fact, as much as I’ve singled out the sax, it is the synths, along with some very meaty bass licks from band leader Andrea de Luca, that provide most of the enjoyment, expression and impression here. Watery sounds return around the ten-minute mark, dreamlike and languid, floating and calm. Perhaps it’s worth noting that Xun is also associated with the lotus, but we don’t dwell with the lotus eaters, and soon make a spirited break from this island of tranquillity.

Interestingly, neither hexagram 32 (Heng) or 44 (Kou) contain the trigram Kan, which represents water in nature; but both have Xun as their lower trigram, representing wind in nature. The other trigram that makes up Heng is Zhen, which represents thunder in nature. The thunder appears around the 15-minute mark, as Nodo Gordiano finally let loose the Crimsonesque tendencies that they are known for. The payoff is amazing. Even though I’ve thoroughly loved Heng up until this point, the explosive nature of this section definitely has more impact because of how long it took to reach this point. It’s just as impressive and impactful when it drops away. It’s no surprise either that when it drops away is when the wind sounds make their appearance. As well as being appropriate in terms of Heng’s composition (as either a hexagram or musical piece), they’re once more reminiscent of Pink Floyd, bringing a nice bookending feeling to the piece. Though it never sounds like either, Heng’s beginnings are reminiscent of Shine On You Crazy Diamond, Parts 1-5, and it’s endings of Parts 6-9.

Perhaps coincidentally, while Xun is wind in nature, it is wood in element (which I can’t help associating the wooden Xoana). Kou begins with some percussion which has a wooden sound. Well, perhaps not wood, but given how electronic so much of H.E.X. sounds, the percussion has a decidedly more organic and natural resonance. Kou has a very different feel to Heng, and is more reminiscent of the avant stylings of Art Zoyd. While Heng still sounded, for all its differences, very much recognisably Nodo Gordiano, Kou is less so. Even when Brilli brings in the sax, it’s less Krimson than Van der Graaf Generator. The only way I could attempt to find a common reference point between Heng and Kou is that Kou reminds me at time of Art Zoyd’s Le Mariage du Ciel et de l’Enfer collaboration of sorts with Roland Petit, and Pink Floyd, too, worked with him. Where Heng is of wind and thunder, Kou is of wind and heaven – and there is definitely something stately and majestic about this piece. It is full of ominous grandeur, that recalls the common etymology of awesome and awful. Kou is the meeting point between the hauntingly beautiful and horrifyingly ugly. While Heng will be an easy listen for most Nodo Gordiano fans, I suspect Kou may be harder. Personally, I love it, and in a way the dichotomy between Heng and Kou works like the yin and yang of every hexagram in the I Ching. Given that Kou is the hexagram for coupling and meeting, this makes it even more appropriate.

One final note, in the I Ching, Heng and Kou are the hexagrams that appear in Xun (wind) on either side of Sheng. Sheng represents ascending and pushing upwards. And with H.E.X., Nodo Gordiano are certainly pushing upwards. Even though I was wishing for a new album from this line-up of the band after Sonnar, I did wonder how they could follow up the brilliance of that album. H.E.X. answers that, and more. It exceeds every expectation I had. So… how does the band follow this? Oh well, anyway the wind blows, doesn’t really matter, to me, to me… 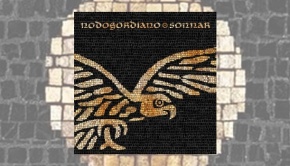