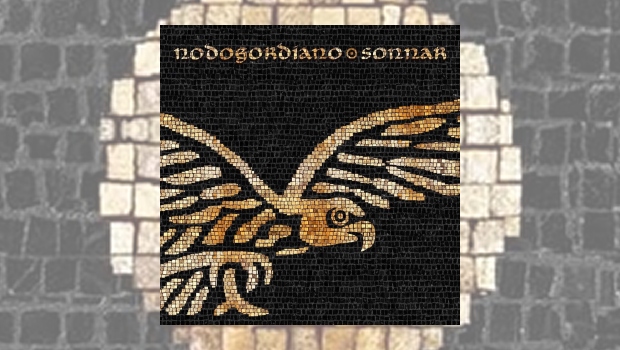 For much of Italian band Nodo Gordiano’s existence, Andrea de Luca has been the only constant, and after a six year absence, he is back again with a new line-up, and a new album – Sonnar. Of the three Nodo Gordiano albums I am familiar with (having not heard the first two), this is almost certainly my favourite (I am refraining from claiming it my favourite outright as it is still very recent in my affections, and there is always a chance that as the novelty wears off, I may change my mind. At this point, though, that seems doubtful).

Nodo Gordiano play an eclectic symphonic style of music that is possibly most closely compared to King Crimson in terms of experimentation and intent, if not exactly in sound. And if we are keeping with the Krimson comparisons, then the new man on the drummer’s stool is Italy’s answer to Bill Bruford. Davide Guidoni is an absolutely fantastic percussionist and drummer, and one of the best you’ve probably never heard of. For me, as much as I already loved the previous albums, Guidoni’s presence raises Sonnar to a whole new level – and is one of the main reasons that I believe the album will maintain its prime position as my favourite album from the band. As much as Andrea de Luca provides swathes and slashes of keyboard and guitar, Guidoni is ever present in the mix (not overbearingly so, I should add).

But while Guidoni is present in opening number, Only Fool! Only Poet!, it is perhaps his most understated performance on the album. This is a gentle introduction, where the two most important features are probably the bass (again, de Luca) which underpins the composition and the vocals of Natalia Suvorina which drift over the top. Suvorina’s vocals almost sound out of place, but not at all in a bad way. Rather, in a sort of otherworldly fashion. They remind me, for instance, of the vocals of Natasha Vaichuk on Pathfinder, by Japanese band Early Cross. It’s a sort of alien tone and presence that takes time to adjust to – or, at least, it did in my case. I won’t say there was ever a time I didn’t like the vocals, but it took me some listenings before I became used to them. In a way, as much as I love this song, it’s a bit of a false start, as there are only hints (mostly from Guidoni) of the sonic bombast Nodo Gordiano are capable of creating. It’s neither the beauty of Exiles nor the beast of Larks’ Tongues in Aspic, but caught somewhere in between.


For me, as much as I do very much like Only Fool! Only Poet! (and would never dream of skipping it), the album truly begins with Limbic Rendez-Vous, which starts with a clatter and a squawk from Guidoni and Filippo Brilli. And did I say Suvorina sounded alien in the opening number? But I’ll tell you what – I absolutely love the vocals (if I can even call them that) on this track. Limbic Rendez-Vous is an absolutely fabulous track which has all the Marmite qualities of any great track. You’ll either love it, or you’ll hate it. It’s brilliant and it’s bonkers, or maybe it’s brilliant because it’s bonkers. The music pounds the listener with barrage after barrage of pummelling drums, and beating after beating of bruising bass. And Brilli’s chaotic saxophone attacks over the top are sublime. After that workout we need a respite, and Charun provides that to a degree. It’s quieter, but no less unsettling. The percussion is superb. Unfortunately for me, since I enjoy it so much, Charun is way too short.

This is not something I could complain about for the following After Dusk, the album’s epic at almost twenty-one minutes. Again, I love the vocals here. It seems it was only the opening number where Suvorina sounded out of place – but perhaps it is because her voice is used almost more as another instrumental layer in Limbic Rendez-Vous and After Dusk, and is not always so prominent in the mix. Her contributions are absolutely essential to this composition though, and provide some of the most entertaining moments. There is a lot going on in After Dark’s eight movements, but nothing is ever lost or even misplaced, as the band use space and dynamics well, so that no part ever becomes overbearing. There are as many moments of great restraint as there are of great intensity. Perhaps most surprisingly is how upbeat and optimistic the song can be at times, given that the time after dark is most often depicted as ominous and threatening. But while those attributes are present, they are tempered by the more positive moments, making this a remarkably balanced listen. Every member of the band has time to shine, and for their contributions to be brought to the forefront. It’s hard not to think this song will be the main attraction for most listeners.

After Dusk is followed by Vanth, which I guess, along with Charun, provide a pair of aural bookends, both being shorter instrumental numbers. Vanth is very different in sound from Charun, though. In my mind, both seem to generate the idea of a malevolent shadowy figure trailing behind me, just out sight. That which cannot be seen, but which can be felt, somehow scarier than what can actually be seen. Nothing is scarier than imagination. However, while the evil felt real in Charun, Vanth portrays a more cartoonish vision. It’s a Scooby-Doo villain, rather than anything darker of more hostile, and the music is appropriately Mystery Machine psychedelic. But that’s not to say it’s no good. In fact, I really like the way that (even if only in my own mind) Charun presents the spectre of something wicked this way coming, but After Dusk, it’s unmasked to be nothing so sinister after all.

The album concludes with the title track, and it’s another highlight in an album full of highlights. The delicate introduction belies the power and passion that Sonnar contains. Surovina returns to full on singing mode, and like Only Fool! Only Poet!, that alien tone that is a little unsettling, but just works. If, like me, you are unsure of how you feel about Surovina’s vocals on the opening and closing tracks, all I can recommend is to keep listening. I think they are fabulous, and would not be so effective if they fitted more conventionally with the sound of the music. Between her vocals, Brilli’s stunning sax, de Luca running all over the place on bass, guitar and keys, and the powerhouse of Guidoni on the stool, Nodo Gordiano have what seems to me to be their best line-up yet, and have what seems to me to be their best album yet. I sincerely hope that not only does de Luca retain this line-up, but that they manage to follow up this album with another – and hopefully one that we don’t have to wait quite so long for. 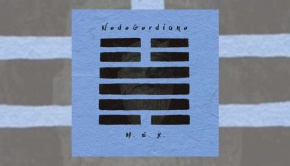