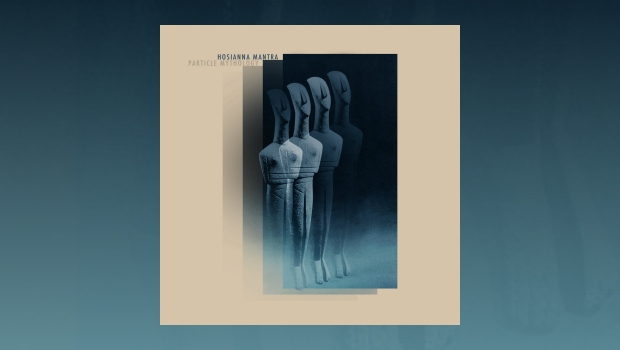 So let me set the scene for you. It’s a very 2020 sort of story, you know, musicians can’t tour and so whilst locked down, decide to record that solo album they always wanted to make but never had the time for. There’s been quite a few releases following that sort of scenario, right? So a bit more detail – this musician has been vaguely planning a solo project for a while, and decides to call it Hosianna Mantra. Is there any connection to Popol Vuh, I hear you ask? No. His day job is bass player in Pallbearer, an American doom metal band. No, please, bear with me. It’s not what you think. The musician in question is Joseph D. Rowland, and he has been amassing, for reasons best kept to himself, a vast array of keyboards and synthesisers over the years. He’s got a bunch of synths and sequencers and he’s now going to use them!

I know it doesn’t sound very likely, and maybe not very promising, but this resulting debut album Particle Mythology is actually rather splendid. I suppose it is dependent on whether you like ’80s Tangerine Dream or not, and I have to admit that I do. There are shades of Kraftwerk and Vangelis, but it sounds to me like Tangerine Dream are the main influence here. The main reasons this works are the melodic hooks which permeate each track, and the fact that he’s avoided the temptation to go in for twenty-minute-plus rambling cosmic noodles. And he clearly has a love of this music, and that shines through.

The pursuit of melody might seem unusual for a doom metal bassist, but in point of fact, Pallbearer are a band I’ve listened to quite a lot, and their sense of melody sets them apart from many doom outfits. Hosianna Mantra allows Rowland to explore this melodic side and expand into completely different musical realms. The album is entirely a solo effort, instrumental, and is anything but thrown together to while away the lockdown days. He must have been playing around with these musical ideas for some time just waiting for the opportunity to make them into an album. Back in the ’70s and ’80s this sort of thing would be filed under New Age, which would surely be enough to have anyone running for the hills, but actually there is a timeless quality to the electronic notes dancing between the speakers that is appealing if you’re at all that way inclined.

With one exception, the pieces presented on Particle Mythology are sharp and concise. Each has a slightly different mood from the bright and bouncy to the dark and mysterious. On a couple of occasions Rowland has perhaps tended to employ more keyboards than he strictly needed to, but it can be forgiven since, for the most part, the kitchen sink trap is avoided. The temptation must have been ever present, given the ludicrous list of equipment employed (see below), but the range of sounds at his disposal make for some good contrasts in texture and tone. Palatial Radiance, for example, begins with an explosion of echoing synthesiser “who’s he’s” before settling into something that sounds like the musical equivalent of exploring the surface of Venus – impossibly inhospitable and yet strange and fascinating. The title track, by contrast, is strident and melodic in a more obvious way, sounding like a lost segment from TD’s Logos period.

Having praised the concise nature of the album, which changes tack before the listener is likely to be wearied, my favourite piece is the closing track, Retinal Echoes, which at 12-minutes is by far the longest piece. For this track, Rowland has permitted himself the indulgence of letting the music develop gradually, and the atmosphere this creates is something rather beautiful and other-worldly. It drifts through some musical sub-space in clouds of echoing synth notes and shifting sequencer patterns. Yes it’s all been done before, but I don’t care, it’s a musical journey which is a joy to hear.

Whether the world situation will enable Rowland to write another chapter whilst waiting for Pallbearer to get back into action is anyone’s guess, but if so, I would be fascinated to see where he takes Hosianna Mantra next.