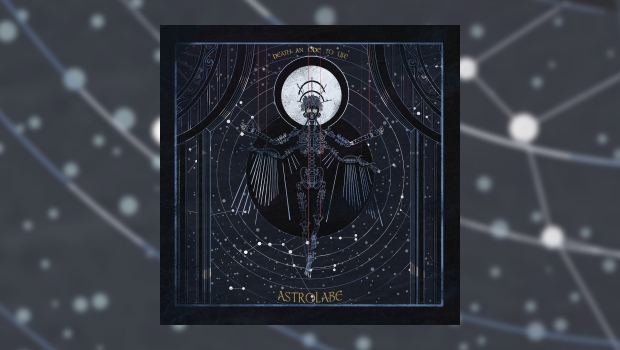 Astrolabe – Death: An Ode To Life

It’s that time of year when websites and Facebook pages are posting lists and awards, and recently Nación Progresiva’s nominees for the Latino Progressive Album of the year drew my attention. I had heard of only two of the bands whose albums were up for the award, one of which (Alpha Lighting System) I had reviewed earlier this year. The other band was Astrolabe, whose 2018 EP I thoroughly enjoyed, but who I had not realised had even released an album this year. So, as usual at this time of year, I’m thoroughly glad that people are still posting lists and awarding titles, to help me find what I’ve missed. Astrolabe are a Strasbourg, France, based band, so given that Latino is a term used for people with ties to Latin America, you might be wondering what those ties are. Well, as their BandcampBandcamp page states, Astrolabe was founded in El Salvador by Victor Osorio Jule. It would appear that the band, like several I know from that part of the world, moved to Europe.

When I first listened to Astrolabe’s The Hermit, The Fool and The Hanged Man two years ago, I was caught off-guard. They were very much not what I expected to hear, and I am likely exaggerating only slightly when I say my breath was taken away several times as the band took me on a sonic roller coaster of thrills and spills. One of my favourite bands is a Dutch band who like to take several twists and turns in their music. Astrolabe reminded me of Sky Architect, except they were on meth and running amok. However, as much as the band wreak havoc, it was done with such style and technical panache that any sense of chaos is superficial. These are talented musicians who know exactly what they’re doing, and where they’re going. And that is before I let you know that the band has Marco Minnemann playing drums for them, and as wonderful as his drumming is, it’s probably the least impressive aspect of the album!

But that was then. And, two years on, I can say with some degree of amazement, that Astrolabe have left that all far behind them. Death: An Ode to Life is so many steps up from The Hermit… that I have been caught off-guard by the band again! With a title like that, it could easily seem to be about living through this strange year, and the overarching awareness of our mortality, which has had the positive effect of making many celebrate what we have. It’s not far off that, but the album is much more personal, and rather than the novel coronavirus, the experience of death that made Victor thankful for life, was the proximity of death to he and his brother during a terrorist attack. The tumultuous succession of emotions are given plenty of space and expanse over the nine tracks of the album, showing the many musical faces the band can wear. There are hints of classical symphonic prog, blues, technical and extreme metal, jazz, and more, all taking their turns as the experiments, orchestrations, sounds, styles, moods and textures interact and overlap.

The album demands attention with opening track, and wild ride, Invisible, before changing tack completely for beautiful follow up Loner. I’ve already mentioned Sky Architect, but the other band that Astrolabe occasionally remind me of are Canadians Qwaarn, who are charmingly eclectic, and achingly melodic and emotive. Loner is full of such charm, melody and emotion, and while it’s Victor’s guitar that captivates in Invisible, it’s his vocals that impress in Loner. I absolutely love Victor’s voice, and it plays a far greater part in the sound of this album than the previous EP, allowing his vocal acrobatics and idiosyncrasies free rein to go wild. These two tracks provide an absolutely stunning and strong opening to the album, and are definitely favourites of mine.

The album turns back to heavier realms with Phantom, but in perhaps even less predictable ways than Invisible. The way the band plays with aggression, complexity, melody and dissonance is incredibly well done, and the rhythm section is really on fire on this track. I’m willing to bet this will be many people’s favourite track on the album. From bombast to bounce, Phantom gives way to Lie. I love the way the song slows at the end. If I hadn’t already thought Lie was bouncy, this would have settled it for me. It’s the aural equivalent of a bouncing ball coming to rest. Not that there’s any time for rest, as Topography of Sadness crashes in. This is possibly the most “difficult” song to listen to initially, although it’s still almost immediately charming. The dynamic between dissonance and melody, as stretched as it has been already, seems stretched even further in this track, as passages of each trade off against each other, and occasionally meet.

The Cosmic Joke is as playful as the name suggests, and though there are numerous transitions in this piece, too, they are so smooth and effortless, it’s almost possible not to notice just how crazy this song is – or perhaps it is just that by this stage in the album, I’m more accustomed to them. The song seems to play on the negative statement that life is just a joke, by suggesting that if it’s a joke, we may as well laugh along and enjoy it. A theme perfectly fitting to an ode to life, suggested by death. It’s joyously absurd, and again couldn’t be more different to what follows. Through The Walls is a ballad that leaves the quirkiness I’ve become accustomed with so far behind that I could almost compare this to some of the gentler moments of Gabriel-era Genesis! Of course, even at their most conventional, this is hardly normal fare. What it is though, is gorgeous.

The title track follows, and as you might expect a title track to be, it’s grandiose and impressive. A gloomy, almost funereal beginning does raise the tempo, but without becoming upbeat. An air of mystery hangs over the piece, and perhaps even the threat of something not entirely nice. It does resolve itself towards the end, though, as if accepting the inevitability and finality that presents itself, rather than the fight or flight response that the number originally feels like. But perhaps we are merely lulled into a false sense of security as it turns back to the funereal doom of the beginning to take us out. I suspect this is my favourite track on the album. It’s magnificent. And, truth be told, the album could end here, and it would feel right. This could easily be a perfect closing number, but there is one more.

If Through the Walls reminded me of Genesis, the opening notes of Coda are surely a tribute to King Crimson’s Epitaph. (It’s not the first time I’ve heard similarities to Crimson, but it’s the most overt, and so much so it has to be deliberate.) Unfortunately, after this tremendous introduction which surely foreshadows great things, it’s all a little too pretty for me. The orchestration is lush, and crescendos wonderful, but it’s all too much niceness, and not enough edge. I guess this is the celebration of life, and choosing to live it to the full, and I don’t actually dislike it at all – but in comparison to all the bombast and eclecticism of the rest of the album, Coda feels too subtle, and rather anti-climactic. Or, at least, that’s how it felt the first time I heard it. It’s again a case of being caught off-guard. Death: An Ode to Life is definitely an album that has greater and greater rewards with every repeated listen. Even if I were unsure initially, I now love every song. If ever there were an album from this year that I would urge someone not to give up on, it would be this one, knowing what to expect makes a huge difference, and I’ve listened to the album enough now that I couldn’t imagine it not ending with this Coda. The album is an ode to life after all, and life is glorious.