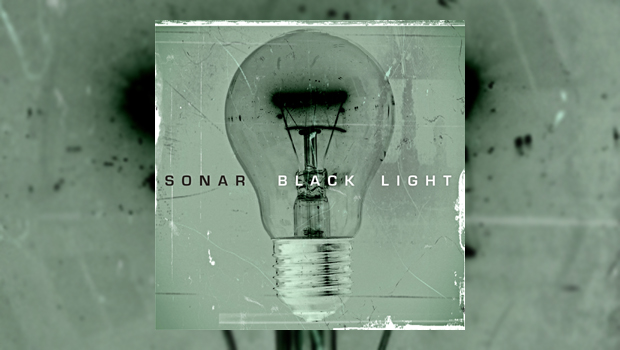 Sonar are a Swiss band consisting of two guitars, bass and drums, and they play progressive music that uses contrapuntal polyrhythms entwined with precise melody and counter melody to create an intense rising tide of minimalistic but simultaneously dense sound structure. The name Sonar is an abbreviation of SONic ARchitecture, and for good reason!

Any comparison to bands of similar instrumental composition playing within a loosely progressive field is largely moot. Not for Sonar noisy wigouts of thrash chording, or soulless displays of million-note-a-minute technical proficiency, but rather a zeroing in on a focal point that leaves the listener thrumming like a high tension line. Listen to Bernhard Wagner’s anti-solo on the title track for evidence that all ego is left at the studio door where this unusual band are concerned. Not that the band lack humour, as Bernhard’s guitar partner Stephan Thelen describes that same solo as “Duane Eddy meets Jackson Pollock”!

Largely free of effects save for the odd echo and reverb here and there, the band take the listener on a ride deep into inner space; this is internally cosmic music of some style. Chief composer is guitarist Stephan Thelen, who studied under Robert Fripp, and one can see Fripp’s logical approach running through this album, given extra edge as Stephen has a PhD in mathematics, as well as having studied classical music. However this does not rob the music of humanity, far from it, as it explores deep dark corners of the psyche in a manner that few other groups are capable of.

Sonar’s connections to Nik Bärtsch’s Ronin, those doyens of jazz-infused minimalism, includes second guitarist Bernard Wagner having worked with that band as a support act, and having their first album A Flaw Of Nature released on Bärtsch’s Ronin Rhythm label. The similarities in the structure of the two bands’ music are inescapable, but Sonar go for a slightly more extroverted angle.

Looking at my review of the previous Sonar album Static Motion it is difficult not to repeat myself, as a lot of the description I used applies here, too. Listening to the complex interwoven rhythms of the bass and drums, echoed or followed by the guitarists in various combinations, always in a unhurried yet fascinating style, it is hard to credit that all this was recorded live in the studio with no overdubs.

Thelen cites Crimson’s Larks’ Tongues In Aspic album as a big inspiration for Black Light, both albums having three tracks “per side” as it were, and indeed the title track was originally entitled Black Light, Part Two, presumably in homage. However the end result sounds nothing like Crimson, the only comparison being the mathematical precision of both acts being used to create a totally absorbing whole.

The Crimson connection is also there in producer David Bottrill, who as well as twiddling knobs for Fripp’s boys has worked with Tool, Peter Gabriel and many others. Bottrill’s highly attuned and sympathetic musical radar brings an unparalleled clarity to proceedings that makes Black Light a joy for the ears to behold, at whatever volume is your particular poison. As this is the first time Sonar have worked with an outside producer, I can say it was a resounding success.

If Guapo is the rebellious and noisy son, then Sonar is the studied calmness of the father “tut-tutting” in the corner, with a hint of pride. Two vastly different approaches aiming at similar outcomes, both result in something utterly hypnotic and somehow uplifting. The brute power of Guapo may force the listener to levitate, whereas Sonar achieve the same effect by stealth and subtlety. Suddenly you’re an inch or two above the floor without realising it had happened. Pass the theodolite, Maud, I feel a corollary coming on…