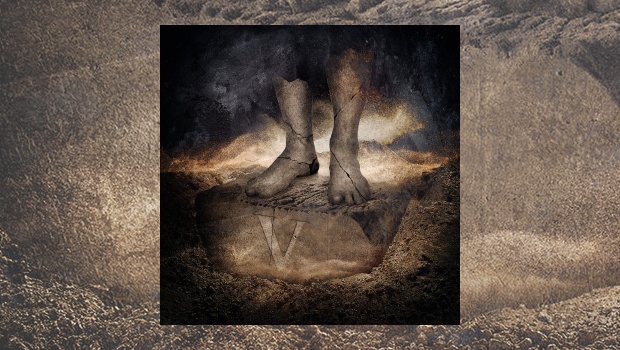 Brighteye Brison from Sweden have revealed their fifth album, V, apparently born from a Bad Elephant. It has to be said the discovery of this mountainous phenomenon somewhat mystified the TPA scientists. They confirmed that V consisted of only three mighty peaks, shrouded in mists, but further exploration was needed to fully understand this mystery. TPA Command put together a crack team, gave them some sandwiches and flasks and tasked them with exploring Brighteye Brison’s V. This was a very brave group led by Captain Roger Trembles with Ensign Leopold Turnip and their trusty Sherpa Twelvesing.

As they approached the mist covered foothills of the ominous Crest of Quarrel they could hear eerie noises, and then suddenly they were in the ‘Canyons of Kansas’. They strode onward, surrounded by echoing harmony vocals and with fanfare keyboard noises resounding, and they could hear the words “House of Despair”, which were not words one wanted to hear in such a dark place. This went on for a while but as the landscape opened up with a reverberating bass, Ensign Turnip ventured to say “We’re not in Kansas anymore, Trembles”.  A shaky voice was heard and then they faced a rising triumphant musical stairway with thunderous bass and a cascade of tinkling keyboards. The pace of our brave threesome increased to keep up with the triumphal march music… and then, suddenly, it stopped – they had unexpectedly conquered The Crest of Quarrel. They looked around but still could not see much going forward and wondered how they got there as, strangely, their journey to that point had seemed remarkably forgettable.

“Pass me a sandwich Sherpa Twelvesing” ordered Captain Trembles and they gathered their energies for the next challenge. Whilst they had a nice cuppa Turnip asked “What’s next?” Their intrepid leader explained they were now to attempt the unfathomable V. “What does ‘V’ stand for, sir?” Trembles shared that the TPA scientists had various theories as to the hidden meaning of V, including  Alien invasions, or it could stand for ‘Veil’, ‘Vinyl’, ‘Vile’, ‘Vicious’, ‘Vacuous’, ‘Victory’, ‘Vacuum’, ‘Valiant’ or ‘Vapid’ or a myriad of words beginning with V. Turnip suggested: “What about two fingers, sir?”… “erm, yes, it could conceivably mean that, Ensign”, Trembles replied. Trembles was determined to bring home some samples of Rock for research so chipped away at the surface with his hammer. He examined the fragments and observed: “Ah  – there are layers and layers of rather Sedimentary rock over some narrow bands of Igneous rock… but as I suspected the main constituent is unmistakably very ancient Seventies Rock”.

Our brave trio finished their packed lunch and set off up V. The early stages of this challenge were interesting and they bowled along with a chunky, driving rhythm, but trouble was ahead. They crested a ridge and encountered what appeared to be a Gentle Giant – however, they were deceived as he proceeded to assault them with some far from gentle or tuneful vocal noises. At one point he droned “This is Your Life” and our intrepid explorers had to dive for cover to avoid a tall figure with a large Red Book. The Gentle Giant returned and filled the air with bonkers sounds and a bewildering number of key changes. Sherpa Twelvesing was strangely enchanted by this off-kilter noise and started sleepwalking towards it, in a trance.  Trembles and Turnip desperately called “Don’t look at him, Don’t Listen to him… look away”, however, their trusty Sherpa was entranced by the organ-driven spell and strangely funky bass. All seemed lost until a strange noise like cartoon legs whizzing around shook him from his trance and his companions managed to drag him off V. Sherpa Twelvesing lay exhausted by his experience, mumbling incoherently about the mesmerising complexity, but in the distance, they could still hear the Gentle Giant’s skewed voice.

“Pass me a sandwich Sherpa Twelvesing”, ordered Captain Trembles. “There are no sandwiches, Sir.” Trembles looked horrified but contained himself. “Pass me a cuppa then”, but he was even more horrified to hear that they had also run out of tea. “Buggeration and dammit, we’re out of supplies already!?”

Captain Trembles explained to his colleagues the enormity of the task ahead of them, and shared that the final peak was nearly 37 minutes high… his companions blanched in fear. However, their valiant leader reminded them that the gargantuan ‘Mount Whirlwind’ in the Transatlantic range was twice that size, and they’d survived that mission. Turnip piped up fearfully: “But Sir, that was a mind-numbingly endless and pointless journey littered with utter bloated rubbish”. Trembles suggested that other opinions were available. Turnip suggested that other opinions might be wrong. “But Sir, size does not matter – being huge does not guarantee a good outcome.” Trembles slapped him round both cheeks, “Pull yourself together, lad… we’re in the Land of Prog. Grow a pair and listen.”

They looked fearfully at the enormity of their next challenge, knowing that apparently at the end were the fabled Magician Chronicles Part II. Young Ensign Turnip piped up: “I thought Magicians with capes and witches with broomsticks died out years ago, Sir? What the hell’s going on, Sir?” Captain Roger Trembles, a veteran and hero of the legendary and bitter ‘Punk Wars’ back in another century, replied: “So did we all, son… so did we all. However, the old religion still clings on in pockets here and there.”

As they approached the third enormous peak, Turnip looked around and asked “Where’s Twelvesing?” Captain Trembles looked sideways and said “I have no idea!”… and wiped the corner of his mouth. “You’ve eaten him, haven’t you, sir!?”, exclaimed Turnip.  Trembles refused to answer and strode on to find The Magician Chronicles.

As they wound their way up the misty slopes they could see someone with a mighty organ in the distance. The ancient noises beguiled them and they were drawn like moths to a flame. Turnip asked tremulously: “Is that…?” “Yes, it’s the mighty Wizard Rich Takeman – he rules this mighty realm and has done for millions of year”, replied Trembles. They continued to follow the Synth paths but they reached a wide Lunar-like rocky plateau on which fabulous hooved creatures with beautiful voices frolicked. Trembles advised caution: “Careful, Turnip – I believe we may have chanced upon the fabled ‘Safari of the Moon’, in which creatures with gorgeous voices try to bewitch travellers with their sweet intoxicating harmonies.” Turnip and Trembles had indeed begun to be enchanted by this Moon Safari, but they were determined and still had SO far to go, so they stuffed their Y-fronts into their ears and stumbled on. After a furiously rocky passage, they collapsed into a quiet glade where they were a little surprised to find some Beach Boys balancing on surfboards above a pool of dreamy vocals. “What are they doing at this altitude, Sir?” asked Turnip – Trembles replied, “I’m not entirely sure Ensign, this whole trip is bewildering but I do recall that at least one those Boys was often quite high.”

Trembles and Turnip stayed a while to sup from the pool, but Trembles looked in poor condition. Turnip shifted uncomfortably as Trembles looked at him and licked his lips. Turnip suggested that perhaps they should keep moving… and put their Y-fronts back on. Their path took them into a prairie filled with colourful flowers with heads shaped like crowns and the air was filled with the sound of electrified lyres and widdly keyboards. Trembles was awestruck: “Turnip, I believe we have found the legendary Flower Kings.” Turnip sniffed one of the Flower Kings and observed “This all seems so familiar, Sir”. Trembles admonished him, “You cannot say that amongst The Flower Kings – they are regarded as the best thing since sliced bread by many in the hallowed halls of Prog” and he fell prostrate to the ground. It was clear that Trembles was starting to either lose his marbles or his will to live. Turnip dragged him on as strange trumpety sounds filled their ears… and then to their amazement, the sounds of the Star Trek theme pierced the firmament (I kid you not!)… but it was all too much for Trembles who crumpled to the ground. He was in despair. “I can’t take anymore… we’re only about halfway up this bloody thing”, Turnip tried to haul him to his feet but Trembles’ journey was over and he urged his young Ensign “Go on without me, I can go no further – You can do it without me… Go on without me”, and with ethereal noises echoing around he closed his eyes and fell into a dream world filled with ancient noises.

Turnip was determined to reach the summit so he continued to make his way through a bewildering landscape of sights and sounds. He reached a mountainside tarn which rippled with swirling keyboard sounds – he guessed this was the mysterious ‘Emerson Lake’ which his grandparents had told him about. He was now desperately hungry and plunged into the water to try to catch one of the teeming fish in the lake. He managed to grab one but was surprised that this Fish had facial hair. He cooked one of these Beardfish and found that even amongst this wilderness it was actually rather tasty, giving him strength to go on to the final heights. Turnip started climbing again, but had to be careful as he had no idea which music-filled crevasse may open or which melodic scree he may slip down. He donned his oxygen mask as he made his final assault, the atmosphere being so thin at this height. He kept thinking “I need something more”, but he was amazed to come across a Pilgrim praying at a high shrine with no oxygen – he was in a blissed-out reverie, marvelling at the sheer altitude, mumbling about his childhood. However, he was clearly stuck there and Turnip had to keep moving forward. As he reached the rarefied atmosphere at 37-minutes high, Turnip looked back down the mountain and could see all that had gone before, all that had led up to this peak. Much of it was clearly once great and wondrous, but he could not help thinking that it did not all belong together in the same place in such a bewildering, confusing landscape. Turnip finally reached the summit… and felt a mixture of emotions. He was in awe of the sheer magnitude of the landscape, but he was also filled with a sense of emptiness – what had been the point?

… and in the distance, he could hear someone say blissfully “Because it’s there…”