(first of a three-night run)

So hands up who thought back in, say, 2012 that Robert Fripp would resuscitate King Crimson and that the new improved beast would be around to celebrate their 50th anniversary? No, me neither, but sometimes the unexpected happens. But if you had suspected some such celebration might conceivably come about, could we seriously have hoped that it would be a vital unit performing material from every era of the band’s illustrious career, and even including newly penned music? Get outta town, right?

Well that is the situation we seem to be presented with. Having last seen Crimson at the Birmingham Symphony Hall only late last year, shortly after which these Albert Hall gigs were announced, I admit that I considered giving it a miss, especially given the ticket price, which wasn’t cheap in anyone’s book. Fortunately, my doubts were short-lived and tickets secured. So I find myself in the wonderfully atmospheric hallowed venue with the familiar plinky soundscape that precedes the ‘no photos’ taped announcement, anticipating the entry of the Crims.

Now much has been made elsewhere of the unsold seats for these shows, and as I look around the hall, it definitely isn’t full, with some boxes and upper tiers sparsely occupied, but from where I’m sat in the stalls, the impression is of a decent crowd of Prog aficionados of all persuasions, judging from the healthy variation of band shirts on display. The atmosphere is building, and then the house lights are gone and the walk on begins to welcoming cheers. Tony Levin and Robert Fripp look particularly dapper in their expensive suits, although Robert immediately removes his jacket and flings it to a shadowy minion before sitting down. And we start with a drum solo. For any other band in the world, this would be a suicidal move, but not so this band. Of course, it’s not really solo, because as you all know, the current incarnation has a three drummer front line, and neither is it improvised, but it is jaw-dropping how these guys seem to have a near-telepathic empathy for each other and slot their individual playing into a seamless piece of music. A drum introductory piece might not sound riveting on paper, but this undoubtedly is. Then with hardly a pause for breath, we are into Pictures of a City with the whole band in action, and I find myself with a daft grin on my face already. 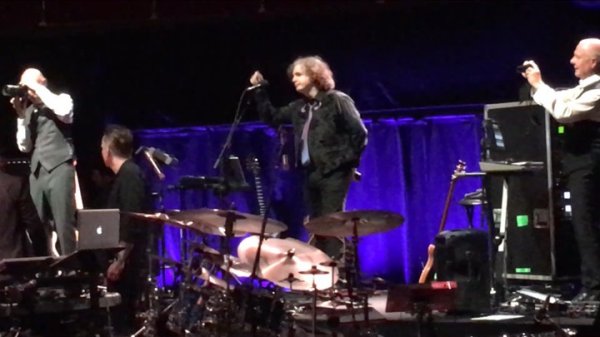 So how does this group continue to improve each tour? I really don’t know, but there are some clues. Jakko Jakszyk is a case in point. His vocals I felt were initially a cause for some concern back in 2014, but his confidence and ability has improved dramatically over the last five years of touring, and he now handles the Lake and Wetton era material really well. He may have more of an issue with the more idiosyncratic approach of the Belew songs, but he compensates by rearranging them to more suit his style and range, and it works a treat. He tackles Frame by Frame, and it works!

Of course, every member of this Crimson beast pulls their weight and has their part to play, but I’m just going to make special mention of a pivotal player on this tour. Jeremy Stacey is the newest recruit, although he’s been present since 2016, but his role has become critically important because apart from being the drumming link between Gavin Harrison and Pat Mastelotto, he plays so many of the keyboard parts which are fundamental to much of the program. He also plays some crazily wonky piano, such as the intro to Suitable Grounds for the Blues. Reminded me of Mike Garson at times, brilliant.

The first real surprise of the first set for me is the inclusion of EleKtriK, which has long been one of my favourite pieces from The Power to Believe. It begins quite gently and builds around the Discipline-esque guitar lines weaving in and out and around the melody, patiently making their way to the moment around six minutes in when things turn brutally heavy. There’s a beauty to the almost clinical savagery, and after these brief magical moments, we slip back into restraint mode again. It’s delicious.

The first set concludes with probably the best Level Five I’ve heard, and the only part of Lark’s Tongues we are to get tonight. What a wealth of material this band has to draw from! End of part one; standing ovation. 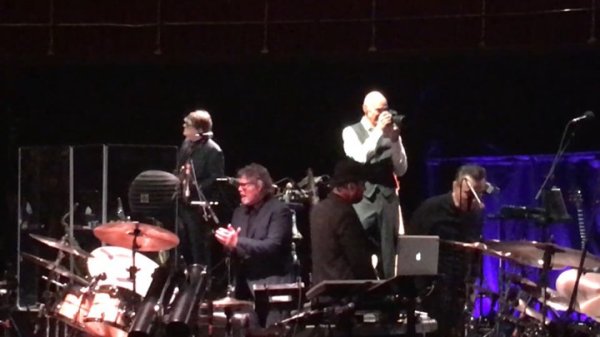 As I have a little wander during the interval, the general consensus seems to be that it has been near faultless so far. Ok, not just me then! So to the second set, and guess what? Yep, a drum solo! Devil Dogs of Tessellation Row is another fabulous exercise which they could probably play blindfold! From here on in, it’s pretty much classics all the way. Cirkus erupts with the off-kilter keyboards perfectly executed, and I’m soon reminded just how vital to the older catalogue Mel Collins is. You simply can’t do justice to the first four albums without his sax and flute playing, and his contributions are wonderful. Cat Food next, another slight surprise, but a very welcome Poseidon song, then the crowd-pleasing Indiscipline. The intro is these days somewhat elongated by a truly stunning display of drum improvisation from our front line. There’s so much warmth and humour in their drum relay, it’s like a song of its own. The baton is passed with eyes – and nobody drops it. Close your eyes and it could almost be one man, except the styles and textures are so varied it would be impossible; all the time Levin keeping the pulse going, seemingly forever. Once in the song proper, Jakko shows us again just how to make a Belew vocal delivery his own, and comically ends the song with “so just how many holes does it take to fill the Albert Hall?”

Moonchild is greeted with enthusiasm, and allows Levin, Stacey and Fripp to shine. I’ve not said much about Robert’s playing, but to think he’s been writing, recording and playing this stuff for fifty years is amazing really. His playing is perfection, just as you’d expect. His solo on Moonchild is fantastic, the whole audience collectively thrilled. Then we’re into Court of the Crimson King, and the wave of appreciation is palpable. But it’s on Easy Money that the band really stretch out and release themselves from restraint. Jakko owns this song now, his vocals once homage to the great John Wetton, but now more than that, sending shivers down the spine. He puts everything into it, including trading guitar with Fripp. The band are absolutely on fire now, and nothing can stop them. But all good things have to end, and Starless signals the last song, and it’s not for nothing that this tune has become something of a Prog legend over the years. It’s brilliant, nothing less. The Hall erupts as it ends, and it’s only a matter of time before they are dragged back for Schizoid Man.

You’ll have got the idea that I’m a bit of a KC fan I expect. True, but I really didn’t expect this celebration to be quite this good. Many people have over the years suggested various ‘definitive’ Crimson line-ups. It makes for fun debate, and of course there’s no right answer. But I have to say that this band, here and now, have to be real contenders for definitive line-up of all time.

Photos by Mandy Loebner and Sid Smith, used with their kind permission.