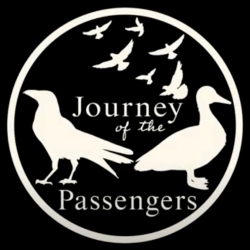 Hot on the heels of the release of Big Big Train’s 2021 album Common Ground, a new independently produced film documentary, centred on their most avid fans (affectionately known as ‘Passengers’), is released (starting) on 20th August 2021.  I say “starting” because it is being released in six weekly chapters thereafter.  These chapters, at circa 20+ minutes each and a total running time of 132 minutes, will be freely available on YouTube to watch online, but a 4K copy will be available to purchase on the Vimeo platform, with all proceeds going to the band to support their ongoing ventures.

There is lots of variety in this film, which essentially captures the band’s Grand Tour of the UK in late 2019 and has content that ranges from fan interviews, live footage, some excellent video footage of venues and the British countryside, rehearsals from Real World Studios and some particularly interesting insights from Greg Spawton, the band’s founder.  Further information can be found HERE.

What I found particularly endearing is the personal interaction between the band and the Passengers.  I have been an avid follower of music and particularly the genre of Progressive Rock for nearly 50 years, and I have never encountered such a genuine mutual respect as exists between Big Big Train and their supporters.  I’m not sure I would go as far as to say that the Passengers are devoted to this band, but there is obviously some magic that is created through the music that really touches the hearts of their listeners.  “How ridiculous”, I hear some of you say, but this is simply a statement of fact; for those who have followed this band for a number of years, and in particular during the David Longdon era since 2010, there is a genuine love for all that the band do, from their musical creation through the presentation of physical music products to how they perform live on stage.  This has all been captured within this Lara Briddon Arts Production film.

The first episode, entitled Let’s Get This Train on the Road, sets the scene with live footage, images of Real World Studio, street scenes in various towns at which the band played on the Grand Tour and an introduction to the Passengers who have a story to tell.  There are some ‘names’ in there, in particular Kevin Thompson (the cover artist for Goodbye to the Age of Steam album), Alison Reijman (the established music journalist), Pete Jones (aka Tiger Moth Tales) and Chris Topham (the owner of vinyl label Plane Groovy Records).  The fan introduction is a bit long but this is, after all, a film about the ‘Journey of the Passengers’.  There are some excellent shots of rehearsals at Real World before Greg narrates how the setlist is built, determining the order of play, with live footage of Hedgerow.  The highlight is Greg giving a very endearing account of how Rachel Hall was given free-reign to develop the Hedgerow violin solo, followed by live footage of her performance, certainly one of the best parts of the entire film.

Episode 2, Never Meet Your Heroes, centres on how Passengers discovered and got into BBT.  Chris Topham describes how he approached the band at about the time of The Underfall Yard album to introduce Plane Groovy Records, with Greg commenting “Chris is a vinyl nerd”; he certainly is, and the rest is history with every vinyl release thereafter being on Plane Groovy Records.  I particularly liked Pete Jones talking about the development of his Cocoon album and how his introduction to the band developed his own Tiger Moth Tales work.  There follows a section on the BBT Passengers Weekend in Winchester, an initiative created by Alison Reijman, with a particularly lovely piece on how Greg more than entered into the spirit of the weekend, explaining the historical significance of many Winchester related matters that feature in the track Winchester from St. Giles’ Hill.  The episode ends with the closing section to Winkie in concert, one of those magical moments with Spike Worsley wearing a pigeon mask; now where did he get that?

In Episode 3, From Train Sets to Railroads, Greg talks about the formation and naming of the band in 1990, and search for gig locations that have a connection with the band.  I loved the concert footage of the introduction of (now former) band members Rachel Hall, Danny Manners and Dave Gregory; it’s a great record of their contributions to the band’s success.  There’s other lovely concert footage too: look out for Greg’s laugh-out-loud moment when he states “Yes, it’s a prog rock show, but it doesn’t have to all be doom and gloom and deep and meaningful, it can be joyful as well”.

Episode 4, Return to the Midlands, gets its name from Greg’s spiritual roots in Birmingham.  He describes the importance that Birmingham Town Hall has to him, the notion that it is sympathetic to the music, if not a difficult venue acoustically and he humbly declares, “I can’t believe that I’m here…”.  The episode includes a mixture of Passenger interviews about favourite tracks from the BBT discography and live footage; Judas Unrepentant, Swan Hunter, The Underfall Yard, Hedgerow and, of course, East Coast Racer seem to get the most attention.  Greg talks about weird time signatures and the complexity of playing “with a lot of counting”.  A very interesting section is where he explains that the band don’t like paid ‘Meet and Greets’, despite the recognition that it is “difficult to make a living with streaming eroding the income of musicians”.  ‘Meet And Greets’ seems to be becoming popular with bands trying to boost their income streams, but BBT shuns this, believing the relationship to be somewhat of a “partnership” with their fans, preferring band and fans to mingle after the show.

Episode 5, The Forum With Decorum, has a theme centring on the importance of social media, the careful selection of moderators, and the building of long-term friendships amongst the Passengers. There is some lovely live footage of The Florentine which showcases David Longdon and Nick D’Virgilio duetting on vocals, and some glorious keyboard and guitar solos from Danny Manners and Rikard Sjöblom respectively. It was particularly nice to see a section mentioning the late Roy Hunter and the topic of sprouts, a running gag within the group.  Roy sadly passed away shortly before the tour, but he was a strong contributor to the Passengers forum and he rightly gets a mention in this film.

The final episode, The Train Home, Now Boarding, brings the story to a close.  The selection of music is fitting with East Coast Racer featuring prominently, amongst footage of Greg narrating his wish to perform at Birmingham Symphony Hall (he’s going to get his wish granted as the band are scheduled to play there on 18th March 2022).  I particularly liked the comments from Harry Blackburn about his ceramic teaching experience where he used to say “it’s not about the pot, it’s about the people”, reinforcing the sense of community and camaraderie amongst the Passengers.  And this is what this film is all about.  Towards the end, Greg explains that, having started the band in the early ’90s, if someone had said they would achieve a Top 40 album one day, he would have laughed it off as a ridiculous idea, but “I’m now hoping for a Top 20 album at some stage, and it’s entirely within our means”.  At the time of writing this, Common Ground had risen as high as No 9 in the UK Official Charts, before settling at No 31.  Well done to Greg and all in the band; success is assured.

This is an endearing film that I recommend to the Passengers.  The dedication to the late Roy Hunter and Tony Bridgeman in the credits is a lovely touch, and will mean a lot to those who got to meet them.  Forgive me, the film does lack a certain finesse, but it is a debut film from the production team with very limited budget and so they should be congratulated. From a technical viewpoint, I was significantly distracted by the regular dubbing of a live soundtrack for an individual song over multiple video shots from different venues; go on, take a look, and you will see mid-soundtrack the band change wardrobes on multiple occasions!  It is a good memento of the Grand Tour, from a different Passenger perspective, but it cannot (and should not) compete with the truly excellent official release of Empire.  Those who took part will love it, other Passengers will certainly enjoy it. I’m delighted to have watched it, but I suspect having a ‘copy for keeps’ will be for BBT completists only.