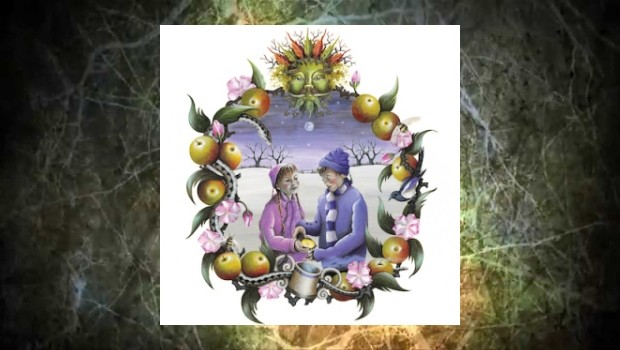 I have been sitting waiting for this release for some time, four tracks, three new, and I volunteered to review this objectively! Well. I will try.

For my sins I will admit to being a long term Genesis fan, not to the point of slavish admiration, but a fan all the same, enjoying everything that has escaped the studio in some moment or other. Since my introduction to Big Big Train a couple of years ago I have devoured their output in a similar vein to my Genesis addiction. I was once given the sobriquet of Genesis, seemingly not owning a t-shirt without bearing the band’s name (no BBT t-shirt, but there is still time). Big Big Train encompass everything I loved about Prog in my youth; rich melodies, multiple sources that both reflect and respect the past and yet bring something new to the table.

So Wassail, the ancient tradition of frightening the dark spirits from the apple trees in hope of a good harvest later in the year. Being Westcountry based and in a village known for past cider making glories, I have taken part in a wassail, on dark and cold January evenings, out in the chilled night air, ice forming on nose tips, beating the daemons from their roost amongst the branches, singing hearty songs and consuming a mulled version of the beverage. We’re subtle here, no shotgun blast.

But the track! Well this is a bit of a shotgun blast, both barrels, possibly from a matching pair of Purdy’s, the stock of the song enhanced by the motifs and engraving of the bands collective musical embellishments from their instruments.

A little this, a little that, nods to my favourite folk rock elements – Show of Hands, Fairport Convention and a few others – the English Rock of Jethro Tull, bits of everything all drawn together that follows on from the music that was first aired on English Electric (choose your version, they all work for me). It bounces along, and all over the country, passengers of BBT are rumoured to have burst into the refrain of “Wasssssssail”! Guilty as charged your honour, and I request several other counts of random singing to be taken into account. Rachel Hall’s fiddle (violin) reminiscent of both Ric Sanders (Fairport) & Seth Lakeman; duelling lead guitars from Dave Gregory and Rikard Sjöblom, Wishbone Ash any one? David Longdon who wrote this provides vocals of grace and power, and flute accompaniment, but can he play it standing on one leg? Nick D’Virgilio’s superb drums, wonderful keyboards combining the grand and the cheesy from both Danny Manners and Andy Poole. Yes it all works, and without the analysis of a trained musician it sounds great to me. All my late sixties and early seventies in one track, and yet fresh and modern. Love it, wipes drool from chin(s).

Lost Rivers of London contrasts against the Wassail drive, but builds and involves in a like fashion, BBT in softer mode. I find I want to look up the history after listening to a BBT historical synopsis, this one the work of Greg Spawton, so rich a canvas that I find myself wanting more. A feast for the ears. From the modern instruments to the medieval bridge (those seventies prog bands again, The Amazing Blondel, creating music with historic instruments). This compares well against Curator of Butterflies from English Electric: Full Power, and highlights the different styles of Mr Spawton and Mr Longdon, contrasting and yet complimentary. This track also reminds me a little of XTC, but given the band members’ history, perhaps I should not be surprised.

Third is Mudlarks, the historic scavengers from the basin of London, more history from the band. The way they use music to highlight bits of British history I find quite delightful and just adds to the attraction of Big Big Train; surprising given that I loathed the subject at school. This is mainly instrumental, and if I had to compare it would be to Camel. It’s a showcase for the band, highlighting each but not so much that any one dominates. It is sublime, and so easy to be drawn into the melody. It has a slight jazzy feel too, but it brings such pleasure, music that is both nostalgic and yet fresh and new. BBT are the mudlarks of Prog, recovering ancient (!) prog motifs and putting them back into use.

Last but not least, Master James of St George, a live recording made at the Real World studios in Box last year and a prelude to a DVD of the same recording sessions to be issued later in the year. A version of the song from The Underfall Yard, the same and yet somehow more richly layered, the prelude to a dream, the live performances from the band at King’s Place, London in August this year. One of the few occasions where passengers’ waiting for a train have a heightened sense of anticipation, and a formidable amount of patience. August will be the first live performances by the band in 17 years. The autumn will bring the live DVD of the Real World sessions, the New Year a new album Folklore. Of the tracks here, only Wassail will appear on the album making Lost Rivers and Mudlarks all the more precious. The CD version comes in a lovely little gatefold case, with some attractive winter themed artwork by Sarah Louise Ewing and further pictures in the booklet with the lyrics to Lost Rivers of London, but after the packaging for English Electric: Full Power I would not expect anything less.

This EP was meant to escape earlier in the year but didn’t want to go out in the cold and dark. I have done, and will continue to, delight in this EP. I will look forward to the album, turn green with envy at those able to attend the gigs, and recommend the purchase of this little gem to you all (though it appears about 3200 people already have it). I’m off to put the sprouts on.