A favoured band, gigs I actually attended, and memories that resurface with the playing of the album.

Well, I could gush, wallow, say how beautiful it is, or I could attempt to be neutral – at least until the end of the review. I must admit to loving this album with one small reservation; being hyper-critical and voicing that opinion I fully expect my shins kicking – it’s the drum solos. To my mind, these best serve when they are less technical and more musical, blending into the tune to become part of the whole. I consider Nick D’Vigilio to be one of that band of exceptional drummers (and his singing isn’t too shoddy either), a man who can both drive and a hold a tune together; but (cowers slightly) I find his intro to Judas Unrepentant leans towards the technical drum exercise, even though it changes and eventually slides smoothly into the rest of the song. If I had a tenth of his talent I’d still be playing and on some days I have no problem with it at all, on others I wish for a fraction less. There, I’ve said it and it’s perhaps best left at that as the song and the musicianship still have the power to move me.

I love Judas Unrepentant. I think Curator of Butterflies was my introductory tune, but Judas… made me sit up and say ‘Wow!’, leading me on a path of righteousness to the whole of the Big Big Train catalogue, and live it is no less so. ‘Pastoral’ is the word most often pointed at the band, typically English, though with an American drummer and a Swedish guitarist/keyboard player, it is only partially accurate. I had already been moved by Victorian Brickwork, enlightened by Kingmaker, but Judas… lifted my spirit. Given its subject matter and Tom Keating’s downfall, it is just exhilarating, to the point that at the gigs I too rose at David Gregory’s command.

A Stone’s Throw from the Line represents a treasured memory, and, as no less than expected, it is a quality live album. I listened again to Genesis’ Seconds Out, my go-to reference album in terms of live performance, and this is up there with it. Recording technology has moved on and the sounds are now more often than not taken straight from the desk, but a good performance is still required. This is such, though acknowledgement should be given to producer Rob Aubrey for collecting the notes together.

I personally find Make Some Noise delightful with its nostalgic look back to summer days when those with musical talent – and quite a few without – would gather and do precisely that. It is the perfect opener for a band more famed for their pastoral English sound, and those who may have dozed off in their seats in the warm and intimate surround of King’s Place are swiftly awoken. I was already awake; an hour spent in the rotunda bar listening to a wonderful and special pre-concert session of early Genesis and BBT’s The Last Train from Peter Jones of Tiger Moth Tales had ensured my attentiveness.

The band worked hard at these performances and The First Rebreather really showed the reward of their efforts, nuanced performances of material never played live, but enhanced in the flesh. Harder than the recording, heavier than the CDs that now share space with Genesis as required listening, even in the quietest moments. This track to my ears shares a lifted melody with the aforementioned Seconds Out, but if this is so then I do not care. Where Genesis are/were whimsical and mythological, BBT are historical, tales of Olde England rendered in music and lyric. David Longdon delivers these with aplomb, if anything I would say that his voice is better outside the restrictive “let’s do it again” walls of the studio; but it is not just David, the supporting vocals of the rest of the band add to the performance. A band blessed with a collection of good voices, from Rachel Hall’s feminine tones to the Swedish lilt of Rickard Sjöblom, every voice plays a part.

This recording is gathered from the best of the three performances and is sharper than I recall, the sound in the first half on that Friday night in August 2015 was a little muggy; this is not all. 23-minutes of The Underfall Yard, and using just available light I produced the now infamous sketch of the performance, circumventing the ‘No Photography’ rule with pad and sketching pen. The drawing I like, the performance was far better. 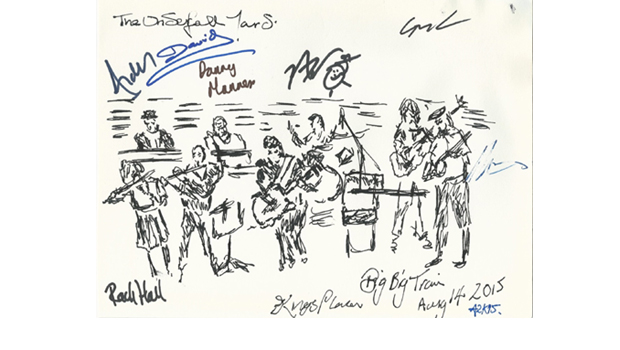 I find myself wanting to visit the places in these songs, ticking them off like some itinerant Big Big Trainspotter, if nothing else demonstrating the power of music to move us, both in a metaphysical and physical sense.

Two sides of the many faceted BBT canon end the first part of the “night’s” performance; the whimsical Uncle Jack followed by the lachrymatory inducing Victorian Brickwork where many a handkerchief is raised to dab away moisture from wet eyes. With the brass work introduced part way through the piece, it is a fitting end of the first part of a performance.

The album reflects the performance, divided in two. Kingmaker surprising many by its inclusion in the set, reworked for David’s vocal styling it is in contrast to the lively opening of Make Some Noise, yet no less welcome and making a right royal time for all. Wassail ups the pace again, adding a little bit of theatre and the loved or loathed audience participation, not that many had not already been singing along. It is a fun tune, escapism and yet still adhering to that BBT educational thread. I love it, some do not, but the locals of the meeting pub for the launch of Folklore were well aware of the song. It is very folk-like, Rachel’s violin becoming more of a fiddle, but the transference of power betwixt stage and audience is retained in this live CD. After the release of such energy, we are Summoned By Bells, one of my favourites, though I admit almost each and every piece played warms me at some time or other.

Three to go, Curator of Butterflies, and more tears. This song moved me then, it moves me now, and I suspect it always will. I have yet to find any BBT song too long, such is the craft in their making. It has been said that with Folklore there is a clear division in how David Longdon and Greg Spawton write their respective songs – Vive le différence!

East Coast Racer is the penultimate tune and like its studio version there is some sense of the motion of Mallard on its record establishing journey. Musing, I wonder if Tornado (the modern replica engine in that class, without the streamlining) will ever hit such speeds? Closing my eyes, I can again witness the back-projected images that accompanied it at King’s Place, such is this music that it stimulates memories and feelings.

The CD endeth, the memories linger on and on; Hedgerow gives a little more from band and audience, one rehearsed, the other carried by the emotion of whichever of the three shows they attended, but in harmony, perhaps not perfect but a reflection of a beautiful time spent together.

If I have gushed overly I hope that I can be forgiven. If you do not know Big Big Train, then A Stone’s Throw From The Line will serve as an introduction worth having. If you do, but were not there, the spirit of those shows shines throughout. The band, as always, have put together a fantastic package for this release.

I finish this two days before the start of pre-orders for their next studio album, Grimspound, taking a little joy from the album title, ascribed as a name to the crow that will adorn its cover and the proximity of the Iron Age village of that name not 30 minutes from my door. Empty your pockets, fill their coffers, there is much more to come; the various volumes of Stationmasters where the current band will reinterpret songs from previous incarnations, and then the fabled concept album. Happy times.