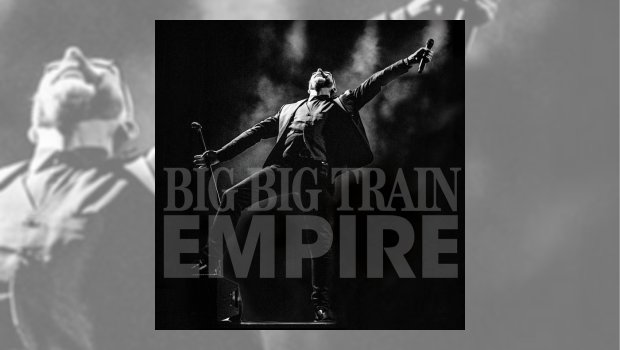 Big Big Train have recently added a new chapter to their ever increasing arsenal of video releases. The title of the new live album is Empire. Surely no coincidence: of course the title refers to the location of the recording, but the word also occurs in the lyrics of Theodora in Green and Gold (re-makers of empire) and refers to both the Roman and British Empires. This is a Blu-ray/2CD set with 16-page booklet, recorded at London’s Hackney Empire on 2nd November last year during the band’s UK tour, containing twelve songs and lasting approximately two hours. A preview song, Winkie, has been on YouTube for some time.

I was somewhat critical at the time of the release of previous live album Reflectors of Light. Although not bad at all, the band could not live up to the high-levels they set themselves for studio albums and gigs. It was not so much the band or their music but the choice of location, camera positions and a series of other technical challenges. Fortunately, this is not the case here: production has been improved considerably, lessons apparently being learned from past mistakes.

This time we are treated to beautiful, crystal clear close-ups of all the individual musicians. The number of camera positions has not only been increased but also improved: we are presented with shots from near and far, high from the balcony, from the side of the auditorium and from both sides and back of the stage, and it is certainly not only the work of fixed (unmanned) cameras. Partly because of this, details such as hands, instruments, faces and emotions are now much more visible.

Video images are projected over or next to the live band, sometimes they interweave with one another: it makes it all the more dynamic. These ‘split screen’ images ensure that Hedgerow, Winkie and especially Brave Captain stand out even more. The latter is well on its way to neo-classic status within the band’s oeuvre. The aforementioned dynamism is not a luxury considering a predominantly static band like Big Big Train, with the exception of singer David Longdon, and to a lesser extent guitarist Rikard Sjöblom and extrovert drummer Nick D’Virgilio.

The use of images/visual editing is tasteful and quiet, no MTV-like antics (do they still exist?), fortunately. Director Tim Sidwell must be a connoisseur of Big Big Train’s music: the correct musician is always on camera at the right time, and now, for the first time, the horn section is also clearly visible, dressed in Peaky Blinders-like outfits with ditto caps, hopefully without razor blades.

Also well portrayed are the tasteful, dexterous contributions of keyboardist Danny Manners, the smooth, charming appearance of violinist/singer Rachel Hall, and last but not least, the all-determining guitar antics of Dave Gregory. How they will all be missed, as this show turned out to be the last to include these three musicians.

But don’t worry, what remains is the core of BBT, as witnessed clearly on the new video: Nick D’Virgilio’s relaxed posture and supple wrists, the proud, glittering eyes and fabulous vocals of singer/frontman David Longdon, the steady rock behind the bass guitar and pedals, founder/composer Greg Spawton, and the versatility and virtuosity of Swedish guitarist/keyboardist/singer Rikard Sjöblom. Together they form the nucleus of the band that has further solidified its position in the prog-firmament with this document of eternal value. This core quartet will enter the studio once again at the end of 2020/early 2021 to record a new album, with the aim to release it before next summer, in time for – hopefully – new live shows. It has been announced that keyboardist Carly Bryant and guitarist Dave Foster will join the BBT live band for the shows in 2021, the identity of a new violinist will be revealed shortly.

The sound can only be described by the word ‘super’. Compliments to Rob Aubrey, responsible for recording and mixing as the band’s permanent sound engineer and sometimes referred to as the eighth member. The harmony vocals especially, often four-part, sound brilliant. The clarity of the sound also ensures that Longdon’s announcements and introductions are much easier to follow than live on the night.

This video recording of the London gig provides many a goosebump moment, I’ll pick a few: the video images of the dog in Hedgerow and Longdon’s interaction on stage. NdV’s megaphone/radio voice during Winkie, about the hero role of a pigeon in wartime. The formidable vocal duo Longdon/D’Virgilio during the acoustic intro and outro to The Florentine. The images of the Big Big Train Brass Ensemble, very focused at work during Voyager, priceless.

Encore masterpiece East Coast Racer is the only classic to survive the ‘cut’ of the set list. Well over fifteen minutes of high-quality prog with heavenly vocals, the wind quintet with its characteristic and sound-determining role, complemented by flute and violin. The thirteen-strong group of musicians gratefully receives the applause from the frenzied audience.

I can go on and on like this for a while, there are plenty of examples. This is an impressive document of a top band in optima forma, not only for the lucky few who were present on the night, but also for those who couldn’t make it one way or another. Highly recommended.

[You can read Alex’s review of the Hackney Empire gig from 2019 HERE, and his new interview with the band’s Greg Spawton HERE.]