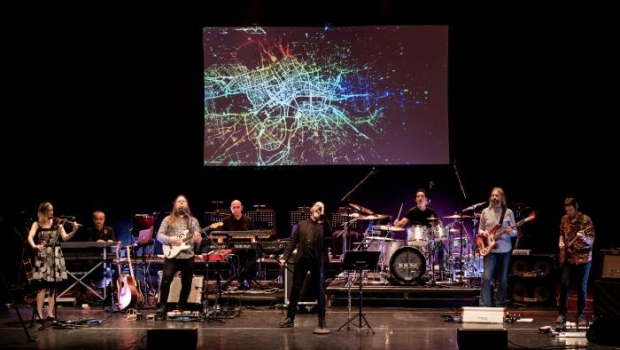 For the third consecutive time I could count myself among the small group of fortunate people who were about to experience a live performance by British prog rock ensemble Big Big Train. Once again, thanks to a dear friend in England, patiently pressing ‘enter’ on his laptop until tickets could be reserved. In this case for the final performance in a series of six that took place in the little known Hackney Empire in the eponymous London district. None of the well-known London venues were apparently good enough (?) for the gentlemen and lady, but no problem: Hackney Empire turns out to be one of those beautiful old theatres that England seems to have patented. Almost one-hundred-and-twenty years old, and to be honest, that was clearly visible in places, but drenched in history and the drama of everything that took place here in the last century.

A more stunning backdrop is hardly conceivable and undoubtedly chosen with care by group and management to serve as setting for a new DVD/Blu-ray, judging by the number of professional cameras and other recording equipment that was set up in the room. Not surprisingly, singer David Longdon would address the issue later on in the show (“expensive”), indeed quite a financial gamble for the band, hopefully it works out well for them.

Because the band, until recently mainly a ‘non-traveling train’ with (multiple) gigs at the same location, had now decided to undertake a ‘full-fledged’ tour, starting in Edinburgh, Scotland and ending in London, where else? With highly-acclaimed latest album Grand Tour tucked away in their travel bag, perhaps their best work to date, a great achievement for the ensemble. No wonder the audience had been looking forward to this for a long time, for the most part consisting of passionate ‘passengers’ as diehard fans of the band are called. Moreover, several nationalities were represented in the intimate North London theatre. It was no big secret that the band would play a decent part of the successful new album, that this would be at the expense of the familiar, older material was inherent. And that’s precisely what happened. 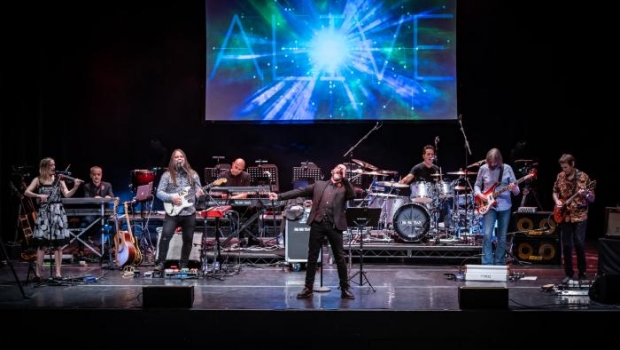 At exactly half-past-seven it was Sweet Billy Pilgrim‘s turn to perform as support act. This time not as a band but only represented by singer/guitarist Tim Elsenburg and singer Jana Carpenter. They provided a short but powerful set of largely acoustic folk music. Their singing and playing went down well, the audience lovingly embracing the duo. After about forty minutes they make way for the main act of the evening.

To great applause, the thirteen members of Big Big Train enter the stage to the sound of Novum Organum, played from tape. Almost immediately they plunge into a brilliant version of the opening track from the new album, Alive. A great opener that makes one thing clear right from the start: what we have here is a band that has got the routine down; a well-oiled machine that perfectly performs the jubilant prog rock song. The accompanying video on the large screen above the stage further increases the sensation. Hedgerow is next, followed by another track from Grand Tour, Theodora in Green and Gold, a very melodic song and a great addition to the set list. The next song is quite a surprise: Winkie, from Folklore, about a pigeon that becomes a war hero. Not an obvious choice, and as far as I can tell, never been played before in a live setting. Once again, brilliant and extremely appropriate animated images in the background.

The Florentine, also a new song, is the first real highlight of the evening. We are treated to a super rendition of this defining song about Leonardo Da Vinci with a beautiful vocal duet from Messrs. Longdon and D’Virgilio at the beginning and end, to be followed immediately by a second highlight in the form of Brave Captain, an epic about a pilot and hero during World War I, with yet again impressive historical images of Captain Albert Ball and his mates. 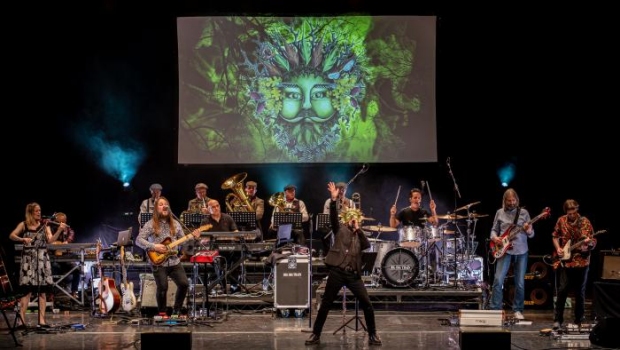 Another two songs from the new album, Voyager, with its parallel between the original and contemporary explorers, merges seamlessly into Homesong, the final track from Grand Tour. Thunderous applause from the enthusiastic audience is the well-earned reward, gratefully acknowledged by the band. The last song of the regular set is the pounding folk rock of Wassail, complete with mask and flute by charismatic frontman Longdon.

It doesn’t take long before the band returns to the stage for the encore: Drums and Brass, now re-christened Engines and Men, is the by now well-known drum solo of D’Virgilio and the introduction of the five-man brass section that seamlessly blends into the real finale, the more than fifteen-minute East Coast Racer, a personal favourite. Without a doubt a new highlight in the band’s show, lasting around two hours in total. The well-known but no less impressive black-and-white images of the record-breaking train add to the festive spirit. Unfortunately the party’s over, around half-past-ten, thirteen tired but satisfied musicians take a deep bow and say goodbye to their loyal audience amidst huge cheers. 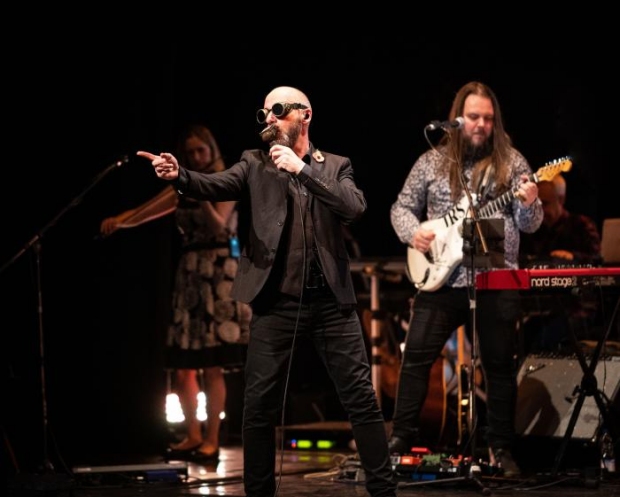 Big Big Train has an excellent singer in David Longdon. OK, the frontman’s mannerisms take some getting used to, but his voice was in extremely good condition, especially audible during East Coast Racer with its exceptionally high notes. On bass and guitar, the silent forces behind BBT, founder/composer/bassist Greg Spawton and guitarist extraordinaire Dave Gregory. A good number of visitors wore XTC shirts, an ode to Dave’s former band. Nick D’Virgilio, NDV for intimates, is and remains an excellent drummer and singer. The extravagant personality of the American is a good counterbalance for the somewhat modest, almost subdued demeanour of the rest of the band, excluding Longdon. Remarkably strong too, the often four-part harmony vocals, a valued and integral part of BBT’s sound. And I really shouldn’t forget the brass section, adding distinctive colour and truly distinguishing the band from its contemporaries.

Brilliant keyboard parts from Danny Manners too, after the departure of his buddy Andy Poole, once again seconded by the relatively unobtrusive Robin ‘Cosmograf’ Armstrong. The latter does not apply to violinist/singer Rachel Hall and certainly not to Swedish guitarist/keyboardist/singer Rikard Sjöblom. Switching smoothly between his little red organ and his acoustic and electric guitars, he was one of the stars of the show, the latter first and foremost characterised by unobtrusive craftsmanship.

In just under two hours, eleven songs pass by, with a decent average length and the emphasis on the last album. The first real tour for BBT, although there is talk of European and American tours, no dates have been confirmed as of yet. As previously mentioned, the band is in excellent shape; apparently, performing together for several days in a row at various locations bringing out the best in them. A huge compliment and a great prospect at the same time.

A small disappointment is the announcement beforehand that taking photos was not allowed, not even with a mobile phone. In itself a great initiative but awkward if, as a reporter, you want to show some images of the performance. Excellent sound also in the old theatre with its high ceiling, which was undoubtedly never equipped for these kinds of shows. Curious about the video and audio recordings that will no doubt find their way to consumers in due course. 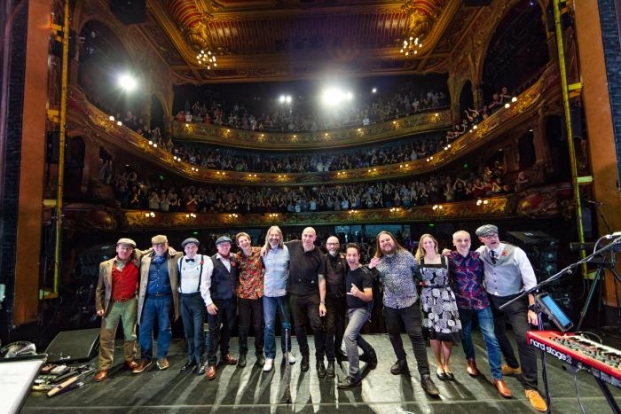 The enthusiastic and knowledgeable crowd leaves in a quiet and somewhat silent way, impressed by what they have witnessed and/or pondering whether public transport connections can be made on this busy Saturday night in the London metropolis. How long will it take before Big Big Train will stop at larger stations and make a real breakthrough to wider audiences? Surely it’s only a matter of time.

[You can read Alex’s review of the new Empire live release HERE, and his new interview with the band’s Greg Spawton HERE.]