Big Big Train have become something of a phenomenon in the last few years, gradually developing a very committed following through a combination of high quality progressive rock music and astute marketing, alongside an intuitive, popular and open social media presence. Now it appears that headlining the prestigious Night of the Prog festival at Loreley in Germany, Big Big Train are stepping up to a whole new level. Before making their debut at a major European festival Big Big Train put on a ‘warm up’ gig in the ‘Rock’n’Roll Mecca’ that is Basingstoke (!), supported by Beatrix Players. The Anvil seems an appropriate venue as an anvil is a device upon which objects can be honed into shape, and in front of a friendly ‘Passenger’ audience Big Big Train could iron out any wrinkles or glitches and finely craft their performance to face the rather more challenging environment of a major festival crowd.

The evening began with a delightful set of beautifully played music with a classical slant as the mainly female band Beatrix Players drew the audience in with their distinctive sounds. Combining heartfelt songs of emotional experiences, sometimes with literary references such as the Bronte ‘Howarth Sisters’ in the beguiling opener Never Again, Beatrix Players soon captivate the crowd. Jess Kennedy’s delicate piano starts one of the main highlights of their set in the glistening Rushlight, based on Amy Birks’ perception of herself as a teenager in contrast to the wisdom and insight of her mother – it’s a beautiful and touching song. The interplay of the excellent Amanda Alvarez on cello, Maria Kroon on violin and Robyn Hemmings on double bass brings the songs to life.

The theme of loneliness in a large city in Not for the First Time haunts the song, and underlines the inescapable comparisons with Kate Bush. Beatrix Players bravely debut new songs including the intensely personal Road to Gorges, followed by Catherine, about Catherine of Aragon. Elsa is an older guitar based song from University days which has now been set to piano by the talented Kennedy and bodes well for their next album. Beatrix Players’ all too brief performance comes to a suitably regal ending with Roses, the final song from their excellent Magnified album. Based on three significant women in the medieval War of the Roses – Margaret Beaufort, Elizabeth Woodville and Margaret of Anjou – Roses is a melodic song steeped in history and feeling, embedded in the turmoil and romance of the past. It is received very warmly by an attentive audience, Beatrix Players’ were a fine choice of support for the main event and it is certain that their enchanting performance will have deservedly acquired new fans from the discerning Big Big Train ‘Passengers’.

Big Big Train enter the stage to an enthusiastic response from an audience willing them on to do well for their festival debut in Germany. Launching  into the dramatic and crowd pleasing The First Rebreather is a master stroke, indicating they know that they are preparing for a festival show with a large audience, many of whom will not be familiar with their material, very different to playing to converted fans at their concerts in 2015 and 2017. Vocalist David Longdon has clearly developed confidence in his stage presence as he affably engages with the crowd, assuring them that as they were preparing for Loreley this would be a gig with the emphasis on ‘Prog Rock’… and he wasn’t wrong! The folkie and rumbustious tones of Folklore simultaneously underline their roots in tradition, albeit often applied to stories of the industrial age, alongside an ability to entertain with accessible and captivating music. The response is predictably rapturous from the committed Passenger faithful in The Anvil, but such an opening pair of songs is intelligently designed to capture the interest of the more general progressive rock fan at Loreley, possibly less familiar with Big Big Train. 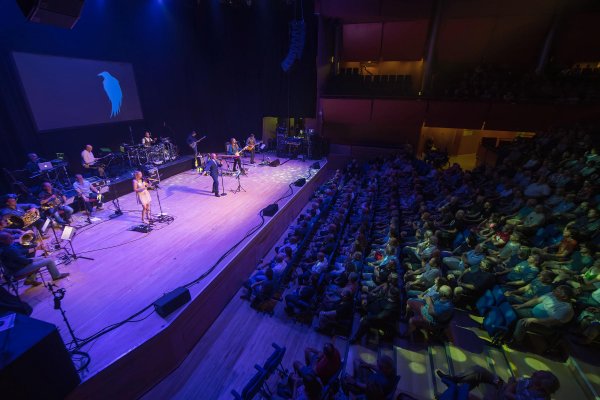 Rikard Sjöblom, once the main-man behind the now sadly defunct Beardfish, is the central figure on both guitars and keyboards in A Mead Hall in Winter, which he mainly wrote with London and founding Big Big Train member Greg Spawton. A centrepiece from last year’s Grimspound, this is an epic song which showcases the musical skills of the whole band, particularly the marvellous Rachel Hall on violin. As this is a ‘warm-up’ gig there are bound to be odd glitches to be ironed out, and it has to be said that some of the vocals for this song were not loud enough, particularly for Nick D’Virgilio’s solo lines. That was certainly not the case for Sjöblom’s remarkable and surprisingly visceral ‘Viking roar’ at one point in the song. Despite these gremlins this is a piece which takes The Anvil into another world as the band weave their musical tales with almost magical effect.

Big Big Train now have an impressive discography from which to choose their set, but nevertheless the next two songs are surprising choices, displaying confidence to delve deep into the catalogue. Kingmaker first appeared as far back as the 1992 demo disc The Infant Hercules but was re-recorded for the excellent Far Skies, Deep Time E.P. in 2011. In a live setting this song, about the powerful and devout Eadgyth, grand-daughter of King Alfred the Great, really comes alive with grandeur and power befitting the subject of the song. With Winchester, the ancient capital of King Alfred’s England, only just down the road, the inspiration for a number of their songs, it seems apt for the band to include this in their set – could they be any more ‘English’? (… albeit with a Swede and an American amongst their number!) 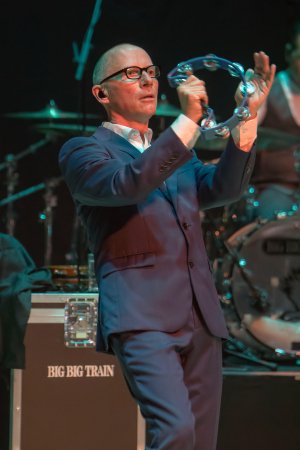 If that song was a slight surprise then it’s almost certain that NO-ONE was predicting they would then play the delightful but aching Summer’s Lease, literally just released with the Swan Hunter E.P. but originally on 2007’s The Difference Machine, recorded with Sean Filkins on vocals. This is a gentle refuge in the show amidst the drama of the more ornate pieces comprising the rest of the set, showcasing the beautiful combined harmony vocals on David Longdon, Nick D’Virgilio, Rikard Sjöblom and Rachel Hall. It is also a promising indication of what may be in store for the long promised Station Masters album project in which the band apparently plan to revisit older songs in their extensive catalogue.

In a show punctuated by highlights the epic and valiant Brave Captain is a real stand-out, showing Big Big Train at their majestic best with Longdon outstanding on vocals. This tale of heroism and tragedy is perfect for band’s style of inspiring image inducing music, and as the guitars take flight with Longdon proclaiming “Brave Captain of the Skies”, in memory of the VC honoured World War One pilot Albert Ball, it is hard not to be swept along with the drama. As soon as the song ends the whole of The Anvil rises to its feet in a much deserved ovation. Such themes are universal and engaging with any audience, and with no hint of jingoism. Big Big Train can be confident that a European crowd will be similarly stirred by this great song.

After such a widescreen cinematic song, a change in mood is induced by Danny Manners in a fascinating extended keyboard solo intro which develops into the almost music hall styled but rocking Judas Unrepentant, so reminiscent of Trick of the Tail era Genesis. This track goes down a storm, with some in the crowd even dutifully standing for Dave Gregory’s court usher “All Rise!” line. More remarkably, Gregory’s guitar work throughout the gig is impeccable, combining to tremendous effect with the very different style of Sjöblom. Big Big Train show their versatility by moving on to the elegiac The Transit of Venus Across the Sun, which features the atmospheric contributions of the brass section of Dave Desmond, Ben Godfrey, Jon Truscott, Nick Stones and ‘dep’ Grant Jameson, who add skilfully to the remarkable musical palette of Big Big Train all night. The visuals of Venus slowly transiting the Sun combined with images of Patrick Moore are simple but effective, adding pathos to this moving song about lost love. 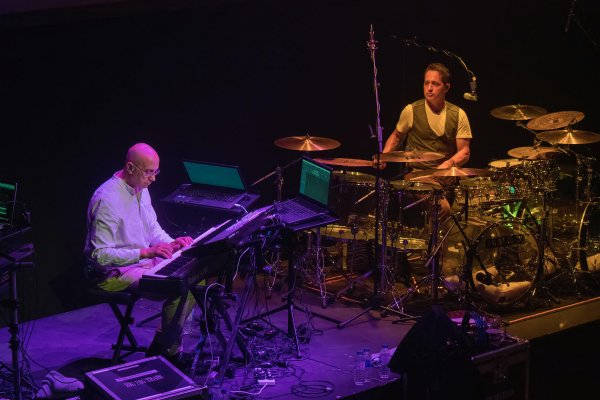 The climax of the evening takes us down an unexpected path as the band commence with the nostalgia of the never previously played The Permanent Way. John Betjeman’s voice intones over pastoral and industrial musical themes and backdrop images that had threaded through the wonderful English Electric album.  However, this marvellous song then excitingly segues into the classic East Coast Racer, with Gregory outstanding on guitar. This is a real musical tour de force with the whole band excelling as they convey the drama and thrill of the historic run by Mallard in 1938. Special mention has to go to Robin Armstrong, who has his own excellent musical project in Cosmograf. Recently joining the band as a live touring member he seems ‘to the manor born’ as he skilfully plays keyboards, acoustic guitar and adds backing vocals to really help the band perform such complex and intricate music all night, particularly on East Coast Racer. Of course, Big Big Train would be nothing without the talent of founding member Greg Spawton, subtly playing bass throughout as the band successfully deliver the music and words which he largely wrote so brilliantly. There’s something about steam trains and tonight we’re all ‘train enthusiasts’ as Longdon sings “…she flies!”, and needless to say a second spontaneous standing ovation follows. It’s a finely judged and remarkable conclusion to the main set, guaranteed to bring any crowd to its feet.

The encore commences with the charismatic Nick D’Virgilio pounding out a marvellous drum solo and then introducing the brass players to deserved applause, before the whole band re-took the stage for a joyous Wassail. This gave a rapturous crowd the chance to sing along merrily in a sense of union with this outstanding band. Sure, this was not a perfect performance. There were some early signs of nervousness – let’s face it, this was only their seventh gig in three years. There were also for some (but not all) issues with sound balance, probably to be expected with an 8-piece band plus brass section playing complex music – this is live music, it’s not always like you hear it on your stereo at home! As a warm-up gig it was designed to iron out any such niggles, but more importantly, putting those slight reservations aside, this was a great performance of evocative and emotive music. Truly a celebration of a great band which has developed a very real sense of community with its fans.  Big Big Train have been honed and crafted over the years – after The Anvil they indeed seem ready to fly, to spread that feeling to wider audiences – Loreley Festival awaited. 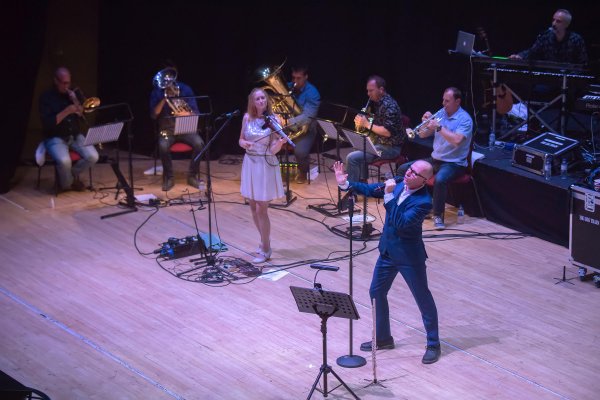