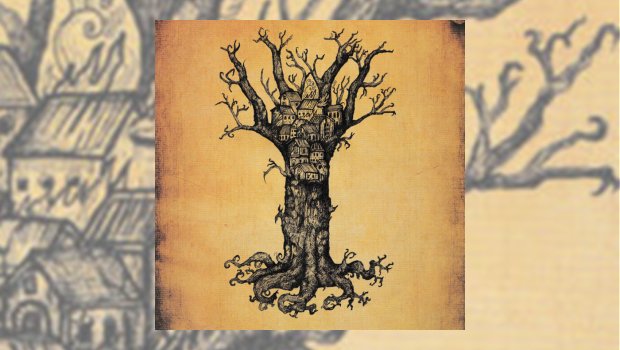 ‘Psithurism’ is a word that rolls off the tongue very pleasantly. With a desire to use it, further investigation reveals that it comes from an ancient Greek term to reference the sound of wind through the trees. Bingo! “The psithurism is particularly pleasing this evening, Dear…”

So it’s a big ‘thank you’ to Michael Woodman, without whom I’d still be referring to leafy rustlings as just that. Michael will be familiar to many as the voice and guitar of Thumpermonkey, who have produced some startling music in recent years (including my favourite album of 2018, Make Me Young, etc, a sizzling listen that you should hear if you haven’t already. And if you have, listen again).

Perhaps surprisingly, Psithurism is Michael’s first release under his own name, an album clearly imbued with the DNA of the likes of Make Me Young, etc whilst investigating more delicate zones, “the quiet interstices between mossy wet stones”, as the PR blurb has it.

For these “murder ballads with funny counting”, you can hear the influences from the progressive world and the likes of Scott Walker, but it is Woodman’s musical personality that shines through most clearly, the rich vocals effortlessly easing into falsetto before falling away to the depths amid intricate guitar frameworks. It’s dark stuff, but with an oddly uplifting edge courtesy of the beauty inherent in the lilting themes and high register dexterity. A cosy melancholia of new growth from decay.

For this album, Michael has gathered the assistance of John Simm (ex-Cleft), the saxophone of Knifeworld’s Josh Perl and Thumpermonkey cohorts Sam Warren and Ben Wren, but the opener, Sacramento, is largely Michael on his lonesome. It’s wonderfully sparse, the rich clarity of the voice, enhanced by echo, magically taking the strain with only resonant guitar and a few synths washes for company. It moves voluptuously from sad to sinister on a wave of choir boy vocalisations, before Petrichor, named for the enticing smell that accompanies the first rain after a dry period, eases in on a bed of rhythmically industrial drums and percussion, opening out to intertwining guitar lines, melodic bass and keys. Guitars soar in an angry uplift as the voice surfs on choppy waves.

The double-punch of the first two tracks sets the scene beautifully – they were made for each other, fragile solo elements and widescreen experimentalism, with Petrichor the angry big brother of the sensitive Sacramento. The power is initially controlled, Petrichor properly raging in the middle on lashing shards of distorted and angular guitar. Woodman’s dynamic voice twists and turns in mind-bending ways, but it is still mightily beautiful, Josh Perl adding bruising sax to the fray, all ebbing away on bubbling synth textures.

That’s quite an opening six-or-so minutes.

The ethereal ending of Petrichor carries on into Cloned in Error, the sound of birds set against industrial threat from the drums. It wreaks of fog on the marshes, a breeze through moonlit trees, rustling the branches to give an unsettling “Whawusthat!?” feel, but the words are more disturbing, filled with inner city grime and dark nostalgia, as if for a time when the future seemed to be a much brighter place. A storm is brewing with Cloned in Error, melodic yet dissonant, restrained but probing, the intensity of the voice again the focus. The percussion is restrained, the chord progressions fascinatingly unexpected, with intent as the double-tracked vocal allows Woodman to harmonise with himself in his highest registers. Halfway through, synths sweep in like the breaking tension of a summer downpour, emerging into a wind of multi-tracked vocals and mathematical guitar figures, growing in stature, and then growing again… eventually sailing away on gossamer threads.

As we progress the tracks get longer, and here we reach the cornerstone. Peace, with a sound like a forest glade at dawn, The Levitant successfully attaining the feet-off-the-ground buoyancy of its title, but again, a nostalgic regret seeps into the words. It undulates through its extended running time, justifying every subtle change, a velvet rollercoaster of gorgeous melody and deft rhythmic switches. Absolutely beautiful.

Taking the rhythmic guitar line of Sacramento, Seachange has a little more meat on the bone. It’s still a cleansingly sparse come down, initially and ultimately, again with significant threatening injections of guitar, sax returning for a left-turn mid-section of delightful intensity. Questing and beautiful, it cycles through the unexpected with a lightness of touch that disconcertingly demands the attention.

Psithurism is a quite magical and simply fascinating release. Listen deeply and you will be rewarded. A singular musical voice freed from the constraints of a band that already allows him considerable freedom, the mix of deft touches with dextrous and well-judged heavier elements is just about perfect for this listener. Michael Woodman should be a household name in angular music circles (or should that be octagons?) based on what he has achieved already, but this release is such a wonderfully conceived whole that it throws down a gauntlet for what can be achieved while venturing off the beaten track.

[You can read Jez’s interview with Michael Woodman HERE.] 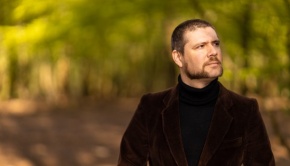