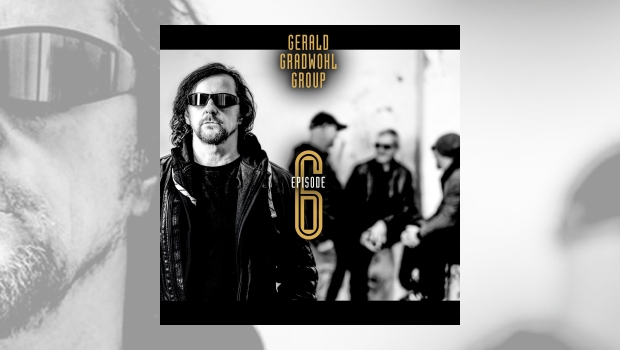 He looks like Lemmy Kilmister’s unwanted bastard son on the cover of his new album, Episode 6: the resemblance is striking.

The album’s first track makes me unsure whether I have entrusted the right disc to my stereo set.

His list of favourite bands/music is one of the most eclectic I’ve come across in ages.

His music is classified under jazz/rock and fusion, but that sells him short; swinging and grooving funk, blues influences and heavy metal can also be observed. In this context, watch the video teaser for the album:

I’m talking about Austrian guitarist Gerald Gradwohl (born 15th April 1967). He studied classical guitar and eventually became both jazz and electric guitar teacher at the Music College in Eisenstadt, Austria, where he is still head of the jazz department. He also started a successful career as a performing artist and has collaborated with, among others, Tangerine Dream, Bob Berg (Mike Stern, Miles Davis), Gary Willis and Kirk Covington (Tribal Tech).

With his four-man outfit Gerald Gradwohl Group (GGG), he explores the absolute limits of jazz rock. This is the band’s fourth album of purely instrumental drums, bass, saxophone and guitar music. Why settle for more if you can do with less? Eight songs with a total playing time of about 50 minutes, except for two songs, the minimum playing time is over seven minutes, sufficient time to work out a theme and make a (lasting) impression. The album was recorded in just a few days in a virtual live setting, and that freshness is clearly audible.

It takes some getting used to upon listening to the first notes of the ultra-short opening track Viking, a kind of heavy metal intro that you would expect from bands like Metallica. Maybe at a jazz party? Let’s Talk is mainly swinging funk in the vein of Snarky Puppy and even has some similarities with Dutchman Benjamin Herman’s New Cool Collective. I dare you to try and sit still. Nearly eight minutes of eclectic fusion with unlikely combinations of Spyro Gyra and free-jazz improvisations in K-Log; a tribute to drummer Harald Tanschek for keeping it all together! And then that ending… Longing For Home is a wonderful lazy blues and jazz with open chords and fine alto saxophone by Thomas Kugi. Deckchair, drink, some sun, just lazing.

Wes Montgomery-like chords mark the opening notes of The Essence of Time and a swinging but subdued sax completes the whole, Yellowjackets being the main reference here. Apart from the guitar, of course, borrowed from Larry Carlton. Fantastic melodic bass lines by Jojo Lackner are the determining factor in the intro of Jabo, swinging unison playing of guitar and alto sax, the bass occasionally joining in. Well, what can I add to that? Maybe that the guitar reminds me somewhat of Lee Ritenour.

Of course, there are influences in abundance, like Mike Stern, Allan Holdsworth and Jeff Beck, but also references to Weather Report, Chick Corea, the Brecker Brothers and Miles Davis can be heard. Don’t let all these references to famous guitar and jazz heroes fool you; there is no copycat at work here. It is merely to indicate the variation in the music of Gradwohl and his swinging quartet. The very same variation is also GGG’s main strength: a tsunami of different styles and moods is coming your way, it would seems strange if you can’t find anything to your liking. Refreshing, innovative, ground-breaking, swinging, rocking, understated – it all applies to Episode 6.

Personal favourites are the funky Let’s Talk and modestly swinging Positive Grid. It has been a great, extremely varied voyage – I must perform a quick search for the previous albums of this Austrian grandmaster and his virtuoso companions; this album definitely makes you want for more. Lemmy would have been proud.