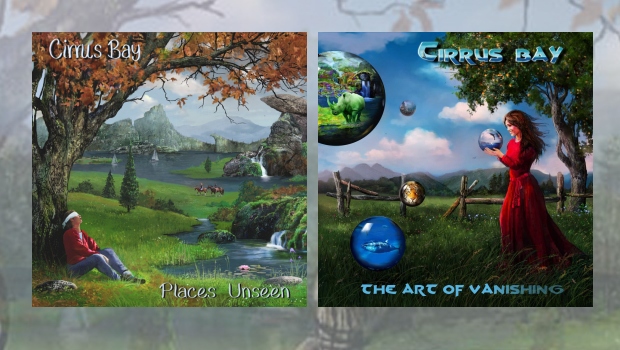 A retrospective look at the last two releases by CIRRUS BAY

Bill Gillham’s Washington State-based symphonic/neo-prog project – currently on hiatus – were sadly overlooked by many on their initial release. There is much for followers of Renaissance, the classic Genesis era and the Canterbury sound to enjoy in their pastoral, dreamy musical soundscapes with beautiful vocals and intertwining, stream of consciousness, guitar and keyboard prog noodlings.

Cirrus Bay had their roots as an acoustic duo, comprising Bill Gillham on guitar and Sharra Gillham (now Acle) on vocals, performing Bill’s intricate but melodic compositions live in intimate venues in Washington State in the early 2000s. With support from engineer and drummer Mark Blasco, a number of CDs were recorded and released:  The Slipping of a Day (2008), A Step Into Elsewhere (2009) and Whimsical Weather (2012) saw Bill’s musical vision develop more clearly, culminating in The Search For Joy in 2014. This was a strong, well-produced album that captured their more prog-orientated musical approach and boasted the talents of Thieves’ Kitchen’s Amy Darby and Phil Mercy on a couple of tracks.

However, it was the arrival of Tai Shan on lead vocals for 2016’s Places Unseen that took the band up another notch, in my view. Recorded at a difficult time for Bill, on a personal level, the album has a wonderfully eclectic variety, with delicate pastoral tones, acoustic and electric guitar passages over powerful keyboard layers and subtle piano motifs. There are strong bass and drum foundations with a sprinkling of flute, saxophone and recorder as appropriate.

The title track opens the album with gentle piano and dreamy vocals before a dancing drumbeat is introduced, with changes of pace and then stabs of retro prog layering. The band’s character is well-exhibited in this song and the influences of Renaissance, Genesis, Caravan and Camel mingle with classical and folk overtones. The music is allowed to ebb and flow, following its own path and rarely repeating itself or following any rigid verse-chorus structures. Followers of The Far Meadow and the aforementioned Thieves’ Kitchen will find much to enjoy.

There are four instrumental tracks, the epic First Departure a particular favourite of mine. The soft, atmospheric start gives no hint of the rapid, twisting prog instrumentation and tempo changes to follow, with lush keyboards over soaring guitar lines.


Dimension 7 displays melodic, Tony Banks-style chordal keyboard arrangements, with Anthony Phillips and Steve Hackett guitar passages here and throughout the album. Horseback to Hanssonland is a fresh, jazzy romp, a homage to Bo Hansson, whilst the closing epic Second Departure is both haunting and uplifting, even having some ’60s-style 5th Dimension vocal harmonies amongst the neo-prog. Whilst some of the transitions between sections could at times be smoother, the sense of variety and the unexpected always makes the longer tracks an enjoyable listen.

The more song-orientated pieces, such as Songs Unheard, provide a refreshing contrast. The Sheltering Cove will please classic Renaissance fans, whilst Boats begins with delicate, yearning phrasing before picking up the pace and soaring high. Bill says it is the album closest to his heart and his favourite: “I was writing what I like best, but not many could relate to it, I guess.”

However, he was willing to continue into another album and The Art of Vanishing was released in 2019 and included what he called more “user-friendly” songs and instrumentals, whilst keeping the spirit and style of the previous album. Some lovely harmonies resulted from Sharra joining Tai on backing vocals. The absence of Brendan Buss meant Bill and Mark covered the instrumental sprinklings with saxophone and piano, maintaining the musical continuity very well.

A Blossom of Hills is an impressive opening epic, with sumptuous vocal harmonies, a spritely beat, bags of melodic complexity and a triumphant, proggy finish making it an album highlight.

Undiscovered Isle is a gentle, solo acoustic guitar instrumental, followed by the dreamy, relaxing vocals of A Garment of Clouds, providing light and shade to the album. The North Country has some pleasing slabs of retro ’70s keyboards and some excellent guitar themes later on. Another trio of instrumentals, Sooke Harbour, Unexpected Wonder and Lost and Profound (with some soaring saxophone), create that unifying atmosphere of pastoral calm and contemplation which is such a central theme to the music of Cirrus Bay.

Two more accessible and commercial tracks, Eden and The Dictator, provide some easy-listening enjoyment with Tai’s beautiful vocals to the fore. They are also key to the success of the final epic track, The Vanishing Place, which effortlessly twists and turns through beautiful, evocative, lyrics and Genesis-like keyboards to a satisfying conclusion.

Unfortunately, as Bill states, The Art of Vanishing sold no better than Places Unseen, and subsequently he has now decided to put the project on hiatus. His new project is called Echoing Trees and he says it will be “more rock, more indie, more live sounding but hopefully without compromising any of the art. I will be on guitars, keyboards and vocals along with Sarah Truman-Gillham on bass and vocals, and hopefully Mark Blasco on drums and vocals as well, to carry us into a bit of a more guitar-centric direction, and a new sound I hope many will like!”

Bill, in his home near Mount Rainier in Washington, is also working on an instrumental solo release that is more piano and keyboard dominated, as a contrast to Echoing Trees. So hopefully the future looks good for this very talented musician as he currently moves out of lockdown and into fresh pastures. In the meantime, I strongly recommend checking out what could now be the last two Cirrus Bay releases ever, if you missed these hidden pastoral neo-prog gems on their initial release. Both albums, and some earlier ones, are available on Bandcamp.

Finally, it is worth highlighting the expressive cover artwork of Lee Gaskins, which successfully evokes the soothing prog music on both of these releases, although is it only me who sees Meghan Markle on The Art of Vanishing?