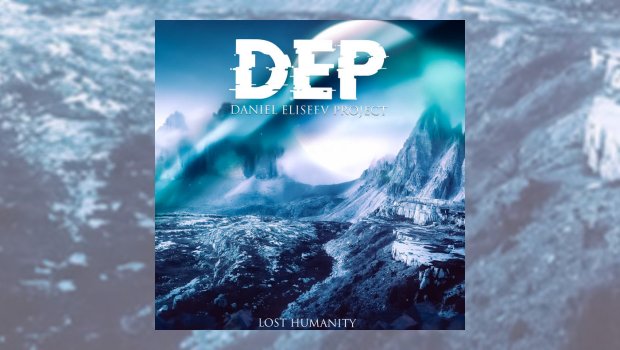 Lost Humanity is the first album I’ve heard from Bulgarian outfit the Daniel Eliseev Project (DEP), but based on the enjoyment I’ve gained from it, it surely won’t be the last. Daniel Eliseev is a guitarist, so unsurprisingly it is his guitar playing that is the highlight of the album. I absolutely love his style, which to me is reminiscent of a mix of the quite different styles of Steve Hackett, Allan Holdsworth, John McLaughlin and Alex Lifeson. Apart from that last name, how heavy the setting for the guitar playing is at times might come as a surprise, but while the music at times approaches metal (and would probably be described as such by some listeners), the guitar playing itself pretty much never has a metal feel. The closest it comes is an almost post- or math rock vibe, but most often it’s a more jazz fusion touch.

The slowly building introduction of opening number Beyond the Night explodes into a bouncy and heavy groove that is immediately welcoming. The guitar playing is alternately nimble and playful, or sweeping and majestic. At times these two styles almost battle each other in a most polite fashion. It’s fun and it’s funky, and it packs a punch. The rhythm section of (on this track) Antonio D’Amato (bass) and Jordan McQueen (drums) get a nice workout and a turn in the spotlight. Quite simply, it’s a very effective opening number.

Curved Path then shows that Lost Humanity is likely to be a fairly eclectic album, sounding like a glorious meeting of Gentle Giant and King Crimson, via Mahavishnu Orchestra. Juan Ignacio Varella adds saxophone to the mix, and it’s glorious (but I admit I am a sucker for sax, so I would say that). All the heaviness falls away around halfway through (around the curve?), and what’s left is sublime, subtle and beautiful. The skittering drums of Anatoli Peev are a delight. But, the path curves again, and we’re back to that Crimson-esque groove through a jazz fusion filter.

It probably comes as no surprise that Autumn Mood is a more subdued affair. The percussion from Pepe Rodriguez is an outstanding addition, while Anatoli Peev is still a star on the drums, but no longer all over the place. Daniel’s guitar playing is pleasant and pastoral, delicate and dreamy. There is a surprising crescendo, before the track subsides, rather than climaxes. I love the contrast between the blistering guitar playing on the previous track, and the more breathy playing on this one, but as per the introductory paragraph, even at his heaviest and most powerful, Daniel’s guitar playing is silky smooth and fluid, like the sweetest drizzle of liquid honey. Hyperbole? Sure, but deliciously so!

Hidden Lands has intricate, jangly guitar playfully riding over an equally ebullient backing. The mood changes to one that might be more menacing in the fingers of others, but that would be too easy and obvious. I love the way Daniel hints at menace and metal, but never crosses the line. The only thing to fear is fear itself, and there is nothing to fear here. As if to reinforce that, Shambhala, is suitably spacey and spiritual – the last hidden land. Thus the Curved Path was perhaps a reference to the wheel of samsara, and the eternal wandering of the souls through birth, death, and rebirth. To be honest, it’s only in writing this review that I’ve even considered what the tracks might mean. While some instrumental albums have clear concepts that are almost unavoidable, Lost Humanity is one of those albums you can just lose yourself in, without thinking about it too much, or at all. It’s simply a joy to listen to.

Mirror World and Prayer for Life are both mid-tempo numbers full of atmosphere, moody, dreamy, and jazzy. The latter is probably my favourite of the two, though, thanks to some more sax (this time, courtesy of Manuel Trabucco), and some meaty riffs from Daniel. But just as it seems that this is an album of two halves, with the second half a less heavy affair, it ends with an almost bombastic In Search of the Truth, the only track to put Daniel’s keyboard playing to the forefront. Even though I know it’s coming, it gets me every time, and certainly Daniel’s playing on this track is the closest he comes to metal – but because of the interplay with the keyboard, it never feels too much. Midway, the mood and volume shifts, and there is a soft and delicate passage before a martial beat, followed by waves of spacey keyboard, and then some more riff-tastic guitar before it all ends in a grand climax.

Everything about this album is so tastefully and well done, from the arrangements, to the instrumentation, to the playing, to the production, which is clean and crisp. The guitars and keyboards are of course prominent in the mix, but every instrument has space to be heard and appreciated. The album is intricate, dynamic and eclectic but not so varied that it loses consistency. There is a fluidity that suggests as much thought was put into the sequencing as every other aspect. I’m left wondering if the only reason that Daniel Eliseev is not more well-known is simply because he’s from Bulgaria. Daniel certainly deserves more recognition than he has, and if he keeps making albums of this quality, he surely will receive it.