Feelings Are Good, huh? The phrase comes out differently depending on how you say it to yourself, it makes a clever album title and, as you will read below, is appropriate for this new collection of eleven songs, written and recorded by Lonely Robot, aka John Mitchell, known and respected as a solo artist and member of Frost*, It Bites, Arena and Kino.

This is the fourth release under the guise of Lonely Robot, and we are firmly back to planet Earth after the successful “Astronaut Trilogy” which began with Please Come Home in 2015 and ended last year Under Stars via 2017’s The Big Dream.

The robot has made it home safely and for this album the space suit is left in the cupboard. Understandably John has possibly said all that was needed to be said about his view of the universe, and we are dealing firmly with more, ahem, down to earth matters on this album.

Not to worry though as the music is as powerful as ever, the album beginning with John/The Robot’s softly spoken digitised voice telling us that Feelings Are Good before longtime collaborator on drums, Craig Blundell, pummels us into track two, Into The Lo-Fi where we are wished back to a time with less technology, and less chance to vent your feelings perhaps? A great opener with its ‘rewind, rewind,’ refrain.

Second ‘single’ Spiders slows things down into a thunderous Blundell waltz beat. The vocals are powerful and angry, this track tells us the story of an unwelcome guest into John’s teenage life. You can read more about that and other insights, in my interview with John Mitchell, HERE.

Perhaps the most familiar sounding track is album lead off single Life is a Sine Wave, which wouldn’t sound out of place on one of the astronaut albums, with its spoken word samples and wide open gaps before the choruses.

John is better known as a guitarist but actually he is a pretty nifty keyboard player and there’s some speedy runs and uplifting melodies throughout the album. Overall the result is fairly keyboard heavy, John says this allows a different way of writing. There is plenty of crunching guitar to accompany the keys though, for example on stomping march Army of One, and the track Suburbia does contain some quick fretwork.

The keyboard work allows for some tender moments on the album, including ballad Crystalline, and The Silent Life, of which there are specially recorded orchestral versions, available on the limited edition Digipak CD.

In summary, the album is a worthy entrant into the Lonely Robot discography. In my view the album has managed to successfully continue the story, or brand if you like, without upsetting too many fans of the previous albums. There may be those that grumble about it being too safe, and the chance to convert new followers has been missed. Perhaps John would not mind me pointing those entrenched people in the direction of his other group collaborations, and see Feelings Are Good for what it is, a great collection of songs – and more than a bit of an insight into the Robot’s inner workings.

Catch Lonely Robot live in the UK, Germany and The Netherlands in December (if the Corona crisis does not interfere!).

[You can read Dave’s interview with John Mitchell HERE.] 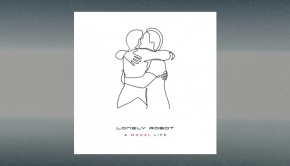